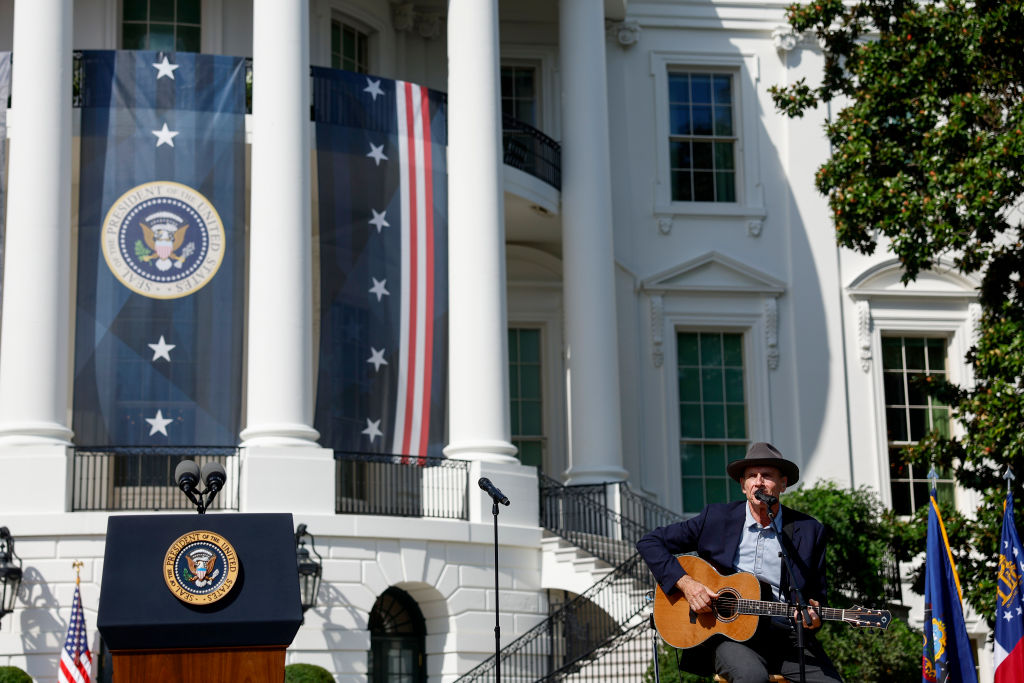 James Taylor performed a special show at the White House on Tuesday to help celebrate the recent passage of President Joe Biden’s Inflation Reduction Act of 2022. The musician played classic “Fire & Rain” before being joined by his wife Kim Taylor for “You Can Close Your Eyes” and “America the Beautiful.”

Taylor’s performance (which comes at around the 21 minute mark in the video) was part of a larger event, which also featured speeches from President Biden and Vice President Kamala Harris, among others. “I’m not used to needing sunblock to go onstage,” Taylor quipped before kicking off the daytime event.

The Inflation Reduction Act of 2022 has several aims, including to lower the cost of energy, prescription drugs, and health care for American families; combat the climate crisis; reduce the deficit; and make the largest corporations pay a fair share of taxes. Notably, the bill provides nearly $400 million towards climate action, representing the largest environmental investment in American history. “With this law the American people won and the special interests lost,” Biden noted before the signing in August.

Taylor, who was inducted into the Rock and Roll Hall of Fame two years ago, released his last LP, American Standard, in February of 2000. The musician recently released a cover of Leonard Cohen’s 1984 song “Coming Back to You” for Here It Is: A Tribute to Leonard Cohen, out Oct. 14.

“When Larry Klein invited me to participate in a Leonard Cohen tribute album, I accepted immediately,” Taylor explained of the cover in a statement. “Both because Larry is a great producer of excellent recordings and a good friend, and because, like almost everyone in my generation, I venerate Leonard Cohen. As soon as I began seeking out my own musical preferences, Cohen’s songs were among my few favorites and had a major influence on my own progression as a songwriter.”

Earlier this year, Taylor joined Carole King for concert documentary Carole King & James Taylor: Just Call Out My Name, which aired on CNN. Directed by Frank Marshall and commissioned by CNN Films and HBO Max, the documentary showcased previously unseen performance footage from their 1970 Troubadour concert debut, the pair reprising that show for the West Hollywood venue’s own 50th anniversary in 2007, and several full song performances from their 2010 reunion tour.