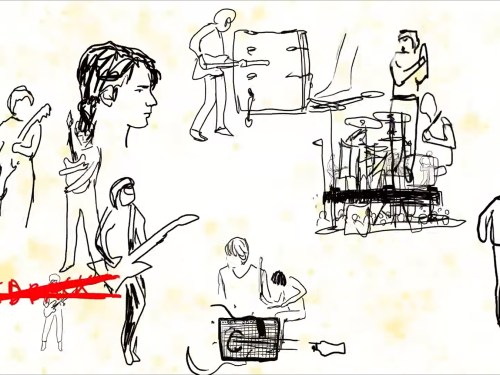 The story begins in 1976 when Bono notices a flyer pinned to his high school bulletin board: “Drummer seeks musicians for band.” “Funny how casually our destiny arrives,” Bono writes. “We’re all packed in the oven that is Larry’s kitchen. How do we fit all the drums, amps, and apprentice rock stars into such a small room?”

Mullen was a competent drummer even at this point, and Dave Evans (not yet named the Edge) was a skilled guitarist. The fact that Bono could barely sing and Adam Clayton didn’t really know how to play his bass didn’t matter much. “Adam was the spirit of rock and roll,” Bono writes, “a sort of posh Sid Vicious. If Larry gave life to the band, it was Adam who believed this band could give us a life.”

Each chapter in the book is named after a U2 song. “Bono takes readers from his early days growing up in Dublin, including the sudden loss of his mother when he was fourteen, to U2’s unlikely journey to become one of the world’s most influential rock bands, to his more than twenty years of activism dedicated to the fight against AIDS and extreme poverty,” reads a press release. “Writing with candor, self-reflection, and humor, Bono opens the aperture on his life—and the family, friends, and faith that have sustained, challenged, and shaped him.”

Bono is promoting the book with a theater tour of Europe and America. It kicks off November 2 in New York City and wraps up November 28 in Madrid, Spain. “I miss being on stage and the closeness of U2’s audience,” Bono said in a statement. “In these shows I’ve got some stories to sing, and some songs to tell… Plus I want to have some fun presenting my ME-moir, SURRENDER, which is really more of a WE-moir if I think of all the people who helped me get from there to here.”

Bono’s future plans are unclear, though they have been chipping away at a follow-up to their 2017 LP Songs of Experience for the past few years. There are also reports that they will perform next year at the $1.8 billion MSG Sphere at the Venetian resort in Las Vegas.