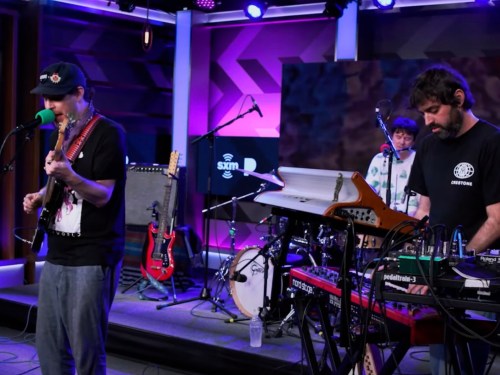 Animal Collective mashed up their unreleased song “Genie’s Open” with a rendition of Silver Jews’ “Trains Across The Sea” as part of the band’s recent live session for SiriusXM.

While “Genie’s Open” wasn’t included on the band’s 2022 LP Time Skiffs, the track became a fixture on tour in support of the album; however, the SiriusXM session marked the first time they performed the song in tandem with the “Trains Across the Sea.”

“He was an inspiration for decades,” Animal Collective wrote at the time. “One we wouldn’t be here without. We’ve been playing covers of his music since 1994 when we first picked up guitars together, so it felt like one of the few things we could do to get through the sadness.”

Unfortunately, the SiriusXM session might be the last opportunity for fans to see Animal Collective perform for a while, as the band announced earlier this week that they have canceled their upcoming European tour due to “an economic reality that simply does not work and is not sustainable.”

“From inflation, to currency devaluation, to bloated shipping and transportation costs, and much much more, we simply could not make a budget for this tour that did not lose money even if everything went as well as it could,” the band said in a statement.

“We have always been the kind of people to persevere through the difficult times and get on stage unless our health prevented it. We are choosing not to take the risk to our mental and physical health with the economic reality of what that tour would have been. We hope you understand and that you know we would not make a choice like this lightly.”