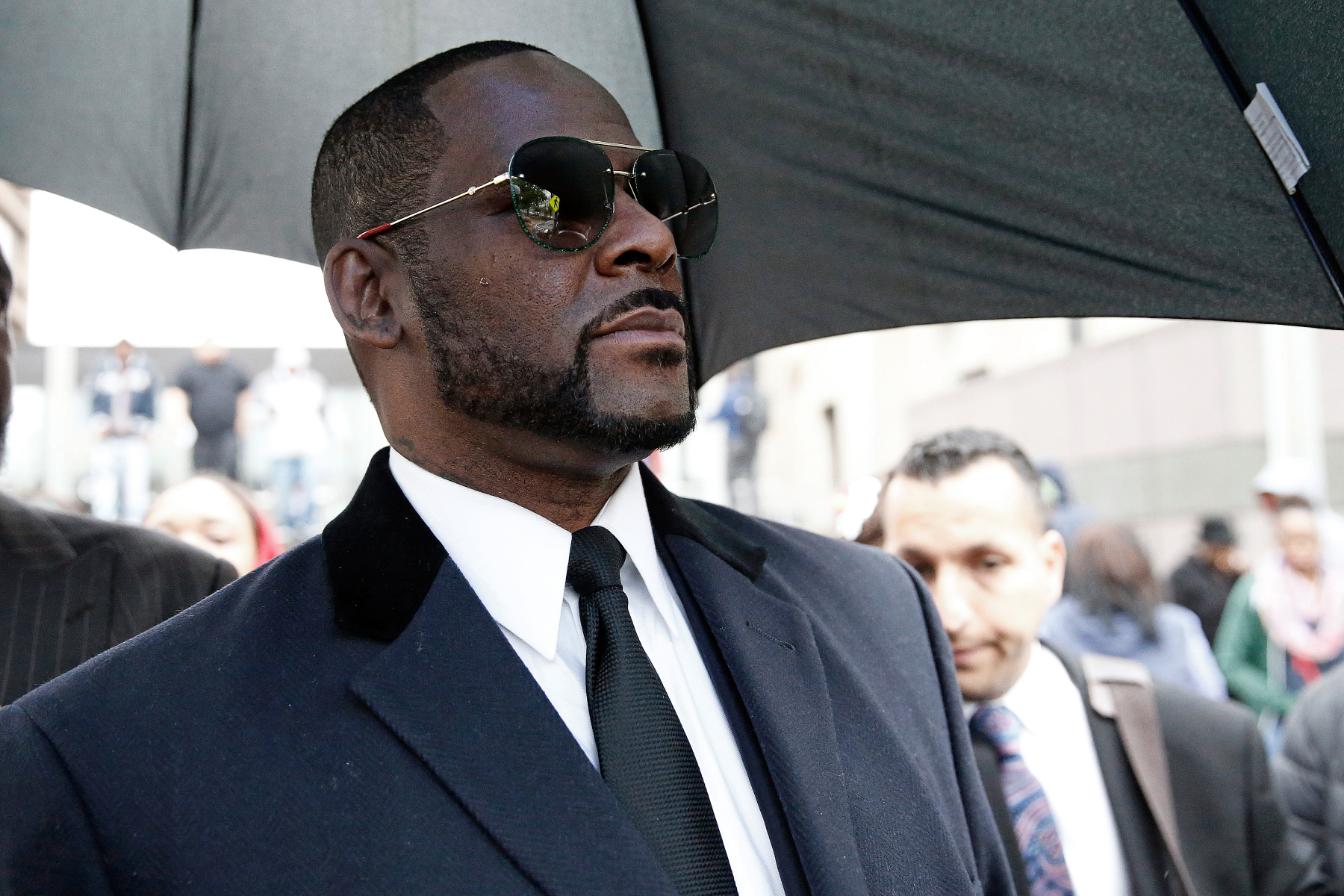 While one accuser appeared defiant and the other timid as they recounted their allegations under pseudonyms, they both shared similar details. “Pauline” was 14 years old while “Tracy” was 16 when Kelly first allegedly propositioned them. Both claimed their respective love for him initially kept them from detailing events to authorities.

Pauline, 37, said she met R. Kelly from prosecutors’ star witness “Jane,” who was her “best friend.” (Jane’s tape is central to this case and the 2008 trial for which Kelly was acquitted, which allegedly depicts Kelly engaging in sex acts with Jane when she was a minor.) Pauline’s first sexual encounter, she testified, took place at one of Kelly’s homes, when Pauline walked in on Rob kneeling in front of Jane, who was naked. Pauline said he told her he was looking for bruises on Jane after she hurt herself, and added that “we all have secrets.” He then encouraged her to kiss Jane, which she did, and all three of them engaged in touching and oral sex per her testimony.

Pauline said the threesomes later included another one of her best friends, who is expected to testify under the name “Brittany.” The encounters took place “multiple times,” Pauline testified, and included Kelly giving them alcohol and engaging her in sexual acts between her and the singer. The incidents took place at one of his homes, at his Chicago Trax studio and on his tour bus both in and out of state. She said their sexual encounters progressed to sexual intercourse by the time she was 15.

Kelly also videotaped their encounters and at one point Pauline said she took one of his videotapes, which she said, like others testified, he kept in a gym bag, but she later gave it back to him.

The two carried on a relationship for a few years and when she was around 20, she said he “was not being a good boyfriend” so she pretended she was “Brittany” and called him for money. “He called it [being an] extortionist,” Pauline explained. “I call it ‘Don’t play with me.’” She added: “It was just a threat… It wasn’t about the money,” but instead about wanting attention from her boyfriend.

Asked why she was testifying now to underage accusations when she did not mention them during an interview in June 2019, she told authorities she was in a different place in life, but that “I loved him, I still love him,” and described him as a “best friend meets boyfriend meets dad.”

Her responses and testimony at times was candidly explicit (when Kelly’s attorney Jennifer Bonjean asked how often they had encounters, she put it plainly: “We fucked a lot.”)

Bonjean introduced herself to Pauline as R. Kelly’s rep, to which Pauline quipped, “Awesome” as they lightly sparred over details in Pauline’s account, which included Bonjean suggesting that Pauline was not a minor when she and R. Kelly began engaging in sex acts, and that Pauline was looking to extort Kelly. Pauline denied the accusation.


When Bonjean asked Pauline if she tried to first extort $50,000 or $35,000 from Kelly, Pauline quipped, ”That’s your closing? That’s nice. I like it!” And like previous survivor Lisa Van Allen said during her cross examination, Pauline exclaimed “Good” when Bonjean’s cross examination ended.

While Pauline delivered fiery testimony on Monday, Tracy was more subdued as she recalled her experience with Kelly.

Tracy, 40, said she met Kelly while in 1999 at age 16 when she interned for a record label. She said she first met Kelly at a gym called Hoops and that she and her boss ended up at his Chicago Trax recording studio where she claims she rebuffed his early advances. Soon after she and her friend ran into him at an expo, where he gave them his number and they later called. The two friends headed to his studio.

While at his studio, Tracy said she told him she was 16 and he told her he was 23. She claims he started kissing her and that “when I looked down, he had exposed himself.” She added that he pleasured himself and after he ejaculated he was apologetic and told her he had “never done something like that before.” About a week later, she alleges he “forced himself” on her in a hotel room. Later that summer, she claims he they had sexual intercourse for the first time in his studio.

Tracy filed a civil lawsuit against Kelly in 2001, which was detailed in an episode of Dateline in 2019. The suit was settled out of court for $250,000, however, Tracy said she did not receive the full settlement.

During cross-examination, Bonjean homed in on alleged inconsistencies in Tracy’s accounting of her age. Documents from her lawsuit appear to show Tracy was age 17 — the age of consent in Illinois — though Tracy disputed the timeframe in the paperwork. Tracy suggested her lawyer filed that information incorrectly and that she “never saw the paperwork” and it was “incorrect”; Tracy repeatedly apologized during cross examination.

Kelly and his co-defendants Derrel McDavid and Milton “June” Brown are charged with receiving child pornography as part of an alleged effort to recover missing tapes that allegedly show Kelly engaged in sex acts with minors. Additionally, Kelly and McDavid are facing obstruction of justice charges tied to allegations that they paid off people who knew about Kelly’s alleged abuse and tried to impede the 2008 child pornography investigation into Kelly. All three have pleaded not guilty.

The prosecution said it expects to rest its case this week, which may include more victims’ testimony, before the defendants present their respective cases and witnesses in a trial expected to run through mid-September.