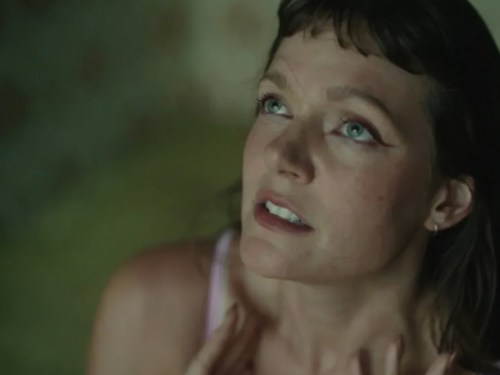 It took 10 years (and a triggering experience) for Tove Lo to feel ready to sing about an issue that affected her deeply: her previous struggle with an eating disorder. Ahead of the release of her LP Dirt Femme this Friday, the Swedish pop star released “Grapefruit” and its accompanying video, which captures the feeling of being trapped she faced in her youth.

“I finally got to a place of loving my body. When I got on stage, I’d wear little clothes and flash. To me, it felt like a victory every time I felt good about myself,” she said in a statement. “I did this movie in Sweden, and they asked me to lose eight pounds in two weeks. They gave me a strict diet, and it was fine. Out of nowhere, these memories popped into my head.”

She added: “I hadn’t thought of these experiences in so long. I was back where I never wanted to be again, but I needed to put it on paper right then. I was ready for it.”

She said she’s shied away from speaking about her body image issues for a while, but suggested that perhaps the “two years of stillness” during the pandemic brought back those memories.

“I guess I had to find the right way to share the feelings and the vicious circle of behavior I was stuck in. I’ve been free from my eating disorder and my body issues for a very long time but they did take up too many of my teenage years,” the singer said. “Maybe I needed all this time I’ve been free from it to be able to look back without feeling pain.”

The Lisette Donkersloot-directed video — which follows her in clips “counting calories” in her kitchen and flashes with metaphoric images of the musician feeling trapped inside “the skin room” — encapsulates how she felt the need “to crawl out of my own skin” inside “a body I hated.”

Donkersloot said she was inspired by Tove Lo’s vivid description of the emotions she shared when talking about facing the eating disorder. “[I wanted to] literally crawl inside her mind. That’s how I came up with the Inner room of self-destruction as I like to call it,” she said in a statement. “This skin room — a magnified and unrealistic reflection of her own body — in which ‘Inner Tove’ is controlled by her outer self where not only she, but the actual room gets physically hurt, bruised and scratched by the impacts of her movements, ultimately her thoughts.”

“I’ve looked back on how my femininity has helped and hurt me throughout my life,” she told Rolling Stone about the album. “And I think the album has that tone to it. I’m bringing up all these questions and feelings and emotions that don’t necessarily have answers to them. It’s just more my current place of wonder.”