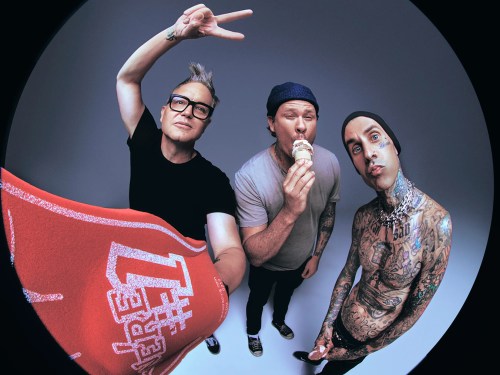 “The band would not even be here today if it were not for your ability to jump in and save the day,” returning guitarist writes to his replacement

In a direct message to Skiba — which DeLonge shared publicly because “it’s important for the world to know that I honor him” — the guitarist wrote, “I wanted to take a minute and say thank you for all that you have done to keep the band thriving in my absence.”

Skiba, founding guitarist and singer of the punk band Alkaline Trio, joined Blink-182 in 2015 following DeLonge’s very public and indefinite “friendly divorce” from Mark Hoppus and Travis Barker. “I think you are enormously talented (I still love and listen to your band to this day). You have always been so kind to me, not only in the press, but also to others,” DeLonge wrote. “I really noticed.”

“Emotions between the three of us in blink have always been complicated, but Mark’s cancer really put things in perspective,” DeLonge added. “But to be honest, the band would not even be here today if it were not for your ability to jump in and save the day. So from my heart to yours, thank you for being a member of our band.”

Neither Hoppus nor Barker have publicly addressed their now-former bandmate Skiba on social media; Skiba also has commented on the exit. Perhaps foreseeing his departure, Skiba is already back at the helm of Alkaline Trio, with the group set to perform a handful of dates later this month.

Blink-182 will officially kick off their reunion tonight with their new single, “Edging.” The trio has already scheduled a massive 2023 tour complete with a headlining set at the When We Were Young fest.