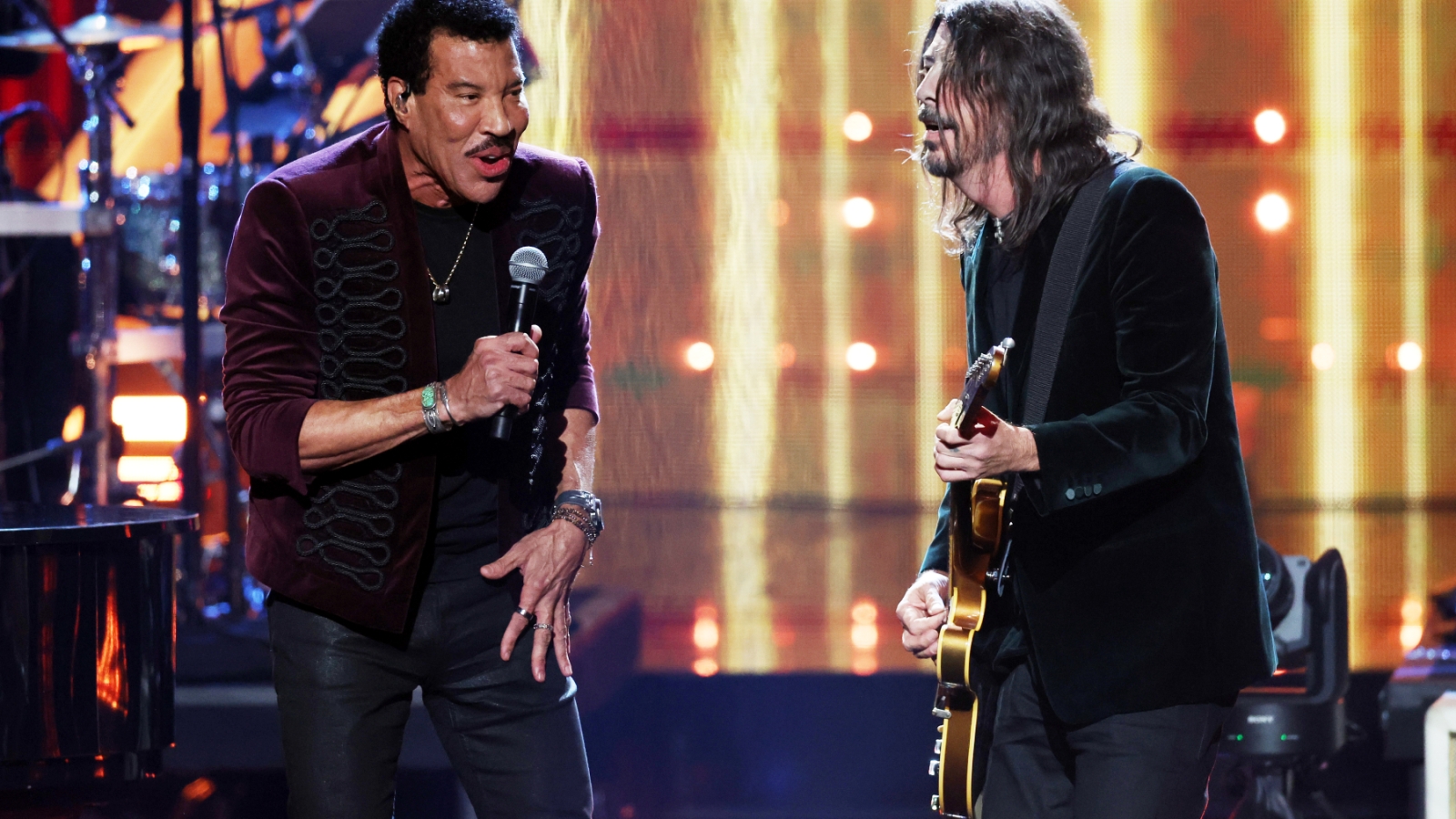 Lionel Richie performed his greatest hits — with Dave Grohl on guitar — before accepting his induction into the Rock & Roll Hall of Fame Saturday night.

After being introduced by Lenny Kravitz, the Commodores musician and American Idol judge opened the medley with “Hello” on piano, immediately taking control of the crowd as they sang the ubiquitous chorus.

He quickly switched into the Commodores’ “Easy,” which brought much of the crowd to its feet clapping to the rhythm, swaying and singing the backing vocals. Grohl joined onstage as a surprise guest to perform “Easy,” one of the night’s musical highlights. (Grohl has been a longtime fan of Richie’s, hosting a town hall with the singer, appearing at Richie’s MusiCares award, and recruiting him for Foo Fighters’ comedy-horror film Studio 666 to chastise Grohl for stealing “Hello.”)

Richie finished with a groovy, bongo-tinged “All Night Long,” pacing the stage and pointing at the crowd to join in.

“If Mozart were Black, would he be Mozart? No, because he wasn’t funky enough,” Richie said during his speech about making music and the criticism he faced when his music wasn’t “Black enough.”

Speaking to Rolling Stone earlier this year, Richie compared being inducted into the Rock & Roll Hall of Fame to reaching heaven, saying: “This is the holy grail of what we do in the business.”

“I was the kid that was a fan to practically everyone in the Rock & Roll Hall of Fame,” he said. “To go from fan to in it … they let the fan in the club. Can you imagine?”

His excitement rested not in the praise of the accolade itself, necessarily, but in the company that it surrounded him with – to take the stage Saturday night and be listed alongside the world-changing artists who he had idolized and loved his whole life at the wishes of his peers.

And as his discography shows, he has more than earned his spot with career-defining hits such “Hello,” “All Night Long,” Say You, Say Me,” “My Destiny,” “Lady” with Kenny Rogers, “Endless Love” with Diana Ross, and a crucial co-writing credit alongside Michael Jackson on “We Are the World.”

Richie’s Rock Hall induction comes several months after the Black Music & Entertainment Walk of Fame inducted him as a legacy artist. Around the same time, the Library of Congress awarded the musician with the Gershwin Prize for Popular Song.

Let me just take a real moment to take this in for a moment. it has been a very interesting road from Tuskegee, Alabama to the Rock and Roll Hall of Fame. Before I start talking about me, let me talk about Alan Grubman for a moment. If you know Alan, to make Alan cry, I don’t even know how that happened. I was shocked and he didn’t say “fuck” more than twice! That’s insanity.

Anyway, let’s go back to what I was going to say. We are celebrating tonight probably one of the funniest things, funniest jokes in my life because all the songs that I wrote and recorded were told to me by so many people, “These are the songs that will destroy your career. What in the hell are you thinking about?”

From that point, I decided I would be the creative arts. What comes with that category is ridicule. Lots and lots of ridicule, but I I use it as my perfect example of “If I’m going in the right direction.” So when someone said to me, “Oh, my God, I wouldn’t do that song if I were you!” That’s the exact song you put out. If it made you nervous.

Then someone came to me and said the most unusual phrase. I was doing an interview one day and he said, “How does it feel now that you’ve left your roots?” I said, “What does that mean?” Because at the time I signed to Motown I didn’t know anything about the record business. I didn’t know there was an R&B department and pop department, jazz. I thought I was competing with all the music.

And so when I went and said, “What do you want me to do?” And he said, “Well, Lionel, you’re not Black enough.” And I said, “Let me ask you a question: If Mozart were black, would he be Mozart?” And the answer is no. Because he wasn’t funky enough. At that point, I realized I’m going in the opposite direction. Because at this time, I needed to understand there are some people who specialize in their job. And then there’s some people who don’t know any better than God’s gift was, “What do you want to write, we can write.”

So tonight, I’m standing on the stage because I want you to understand how important it is to let the artist go. Let the creativeness flow. If you get an idea, the last thing you want to do is open your mouth and say something stupid, like “I wouldn’t do that if I were you.” Especially if you’re talking to a creative artist.

Tonight I want to say one other thing because it’s very important looking in this class tonight that I’m in: Judas Priest. Brought on by Lenny Kravitz…. You see what happens here is that this is a complete thought of what I was thinking when I first got into business. Rock and Roll is not a color. It is a feeling. It’s a vibe. And if we let that vibe come through, this room will grow and grow and grow.

I cannot and will not walk off this stage without acknowledging my dear dear dear friends the Commodores. Thank God for the Commodores because there would be no Lionel Richie…
I must say also that there are people that have actually had to tolerate quite a bit. Sometimes when you fall in love with the music business, you tend to fall out of love and people don’t understand what the hell you doing over… I missed 25 years of pep rallies, bonfires, family reunions.

I’m on the stage tonight. But the most important thing is I want to thank all of my friends, my family, Miles, Sofie, Nicole. The grandkids. Lisa, my heart. I want to thank them for actually sitting through my magical mystery tour. And I want to let everyone know that I am probably not coming home for quite a while. I’m in love with this business. I love what I do. Thank you so much for this amazing moment.

James Anthony Carmichael, my co-producer, on every album, every song. You listen to every complete, crazy lyric I ever wrote. And said ‘I know that’s not the right word. Find the word.’ I want to thank James for being right there with me every night, 25 hours a day, discovering my voice
.Rock and Roll Hall of Fame, thank you very much.