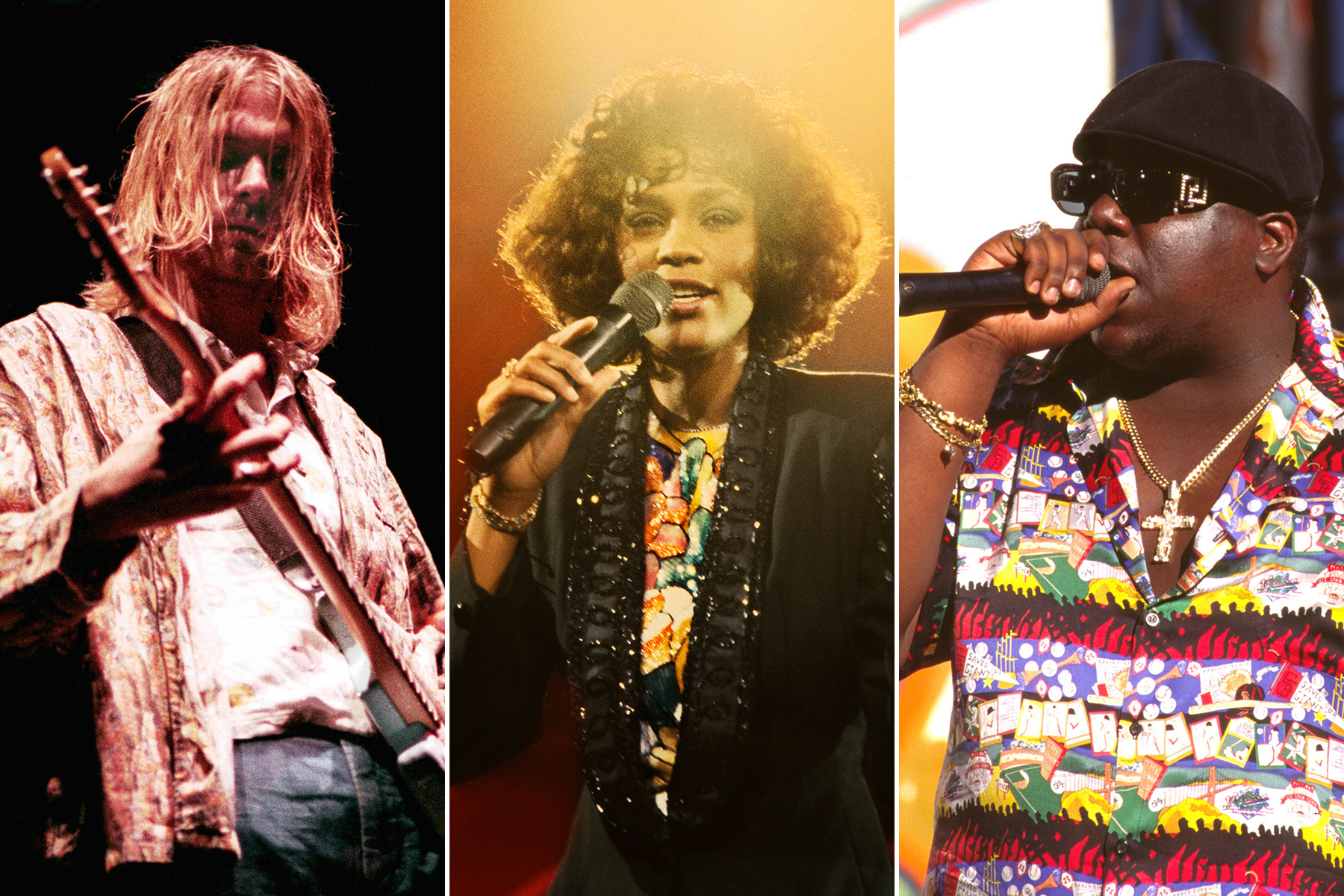 To some, last week’s news that Micky Dolenz had filed a lawsuit against the Department of Justice to obtain the complete FBI file on the Monkees was a surprise: The Monkees, subversive?

But as it turns out, the made-for-TV Monkees were just one of many pop artists who’ve been the subject of FBI surveillance, monitoring, or some degree of investigation since the Fifties. When it came to entertainers, “the FBI generally opened files for very specific reasons,” says Aaron Leonard, author of the forthcoming Whole World in an Uproar: Music, Rebellion and Repression 1955-1972. “First was when the person was affiliated with an organized group or was engaged in specific political activism. Just making a casual anti-war statement could put you at odds with the powers that be. With Micky Dolenz it’s not a big stretch to think that a Beatles knockoff could be considered dangerous.” (Folk-era targets along this line included Pete Seeger, Phil Ochs, and Dave Van Ronk.)

The other reason for keeping tabs on a musical act, Leonard says, was a connection to a “‘criminal’ or potential criminal incident.” As the FBI files reveal, a shift to the latter overtook the former starting in the early Seventies; in recent years, pop stars involved in extortion cases or death threats were more likely to have files than politically affiliated ones.

In his research, Leonard learned that files on seminal Black artists Sam Cooke, Richie Havens, and Nina Simone have been destroyed. But over the last decade, the Bureau has periodically declassified a number of existing files. Some (like those on the Monkees, Grateful Dead, and Marvin Gaye) are brief and majorly redacted. Others show how the FBI was either tracking certain musicians or looking into possible investigations (for example, a dozen-plus pages about supposed incidents of “civil unrest” at Kiss concerts).

Of the most recent and decipherable files, here are the FBI’s own greatest hits on pop acts beyond the Monkees.

Whitney Houston
In 2013, the Bureau released a 128-page file on Houston that touched on several inquiries. In 1988, the agency investigated an obsessed fan who wrote numerous letters to Houston, one claiming he “might hurt someone with some crazy idea.” The letters were passed along to the FBI, who contacted the letter writer; the person in question claimed he only wanted to “elicit a response” from her. In 1992, Houston was the subject of a failed blackmail attempt by an unnamed lawyer who first demanded $100,000, then $250,000, claiming he would “ reveal certain details of the private life …. to several publications.” Since the case was not deemed a federal crime, the Bureau chose not to pursue it. In 1999, a Dutch resident was interviewed by the Bureau after he sent a tape to Houston with a song of hers he claimed to have written, but he denied any threatening letters.

Marvin Gaye
A fairly brief and enigmatic six-page file is centered around two concerts Gaye gave in Virginia (in Richmond and Norfolk) in 1977. Upon arriving for the shows, Gaye claimed he hadn’t been paid, resulting in the promoter having to repay him and losing money along the way. According to the file, the Bureau was looking into a redacted-name business person “whose check for $75,000 was allegedly responsible for enticing Gaye” to travel to the gig, and whether it would involve conspiracy to transport stolen property in interstate commerce. The released parts of the file do not mention if the baffling matter was ever resolved.

The Notorious B.I.G.
Biggie’s three files, totalling 359 pages, are, of course, dedicated to his still-unsolved murder in Los Angeles in 1997 and the possible, undetermined role of local cops. “Numerous sources have stated they will cooperate with the FBI to determine what role LAPD officers played in the murder of Wallace,” states one report. The file also includes heavily redacted grand-jury subpoenas from 2004; a 10-page chronology of Biggie’s career starting in 1993; and a reference to a Tupac “shrine,” complete with 9mm guns, found in the garage of an unnamed LAPD officer. The report also determined that armor-piercing ammo led to Biggie’s death. The case was closed in 2005.

Robin Gibb
According to his file, released in 2012, the late Bee Gee was alleged to have been responsible for “a potentially threatening telegram sent to the London law firm representing Gibb’s then wife in divorce proceedings.” As reproduced in the file, the telegram — attributed to “Robin Gibb” — said, in part, “What you have done is just about the limit, I warned and warned you. Know [sic] one walks all over me … I have had enough. I have taken out a contract on [name redacted].”

A source contacted by the FBI said the telegram had been sent from an address in Miami, where Gibb lived at the time. For his part, Gibb’s unnamed manager told the FBI that Gibb’s ex-wife’s attorneys may have themselves been responsible for the telegram and were “attempting to use the FBI to embarrass Gibb and to bring pressure on him in their divorce proceedings.” When the law firm declined to pursue the matter further, the investigation was dropped.

Jimi Hendrix
Not made available to the public until 2011, Hendrix’s file includes reports of a 1969 pot bust in Toronto and even his 1961 arrest for “taking a motor vehicle without permission.” Amusingly, the file also includes the FBI’s report on 1969’s Woodstock festival, in which Hendrix participated. After a list of other acts on the bill, the file states “… those were only the entertainers named on the program; the main entertainment (if that is the correct word) was provided by the bizarre people present…”

John Denver
Probably the last person anyone would expect the FBI to monitor would be the late troubadour known for “Sunshine on My Shoulders.” But Denver’s file (released in 2011) includes a report on the Bureau tracking his participation in a 1971 “Dump the War” rally in Colorado, alongside Vietnam vet John Kerry. In 1979, Denver’s file was padded with a report that a “female speaking German and English” had been calling Denver every day (for a total of 17 “threatening calls”), all to say that her mother’s boyfriend was “coming to Los Angeles to kill Denver.” A 1990 report included an allegation by an unnamed source that Denver was “pretty well strung out on cocaine” during a concert, but the allegation was “not substantiated by this bureau.”

Denver never mentioned the case in his autobiography, Take Me Home, but did note that after unspecified threats on his life, he beefed up his security by hiring the head of a martial-arts academy (from Colorado, naturally). In the same book, he also admitted to using pot and coke.

Kurt Cobain
Made public early last year, Cobain’s slim 10-page file includes letters to the FBI urging the Bureau to look into his death, which the letter-writers claimed was murder. “We appreciate your concern that Mr. Cobain may have been the victim of a homicide,” read the FBI’s responses. “However, most homicide investigations generally fall within the jurisdiction of state or local authorities. Another letter to then–Attorney General Janet Reno, sent in 2000, was also included.

Miriam Makeba
Thanks both to her anti-apartheid activism and her marriage to Black power proponent Stokely Carmichael (called a “Black extremist” by the FBI), the late South African singer was awarded a 292-page file finally made public last month. The documents show how the FBI tracked her and Carmichael’s travel and touring itineraries, even their purchase of “a new household refrigerator, two washing machines and a range stove” in 1968.