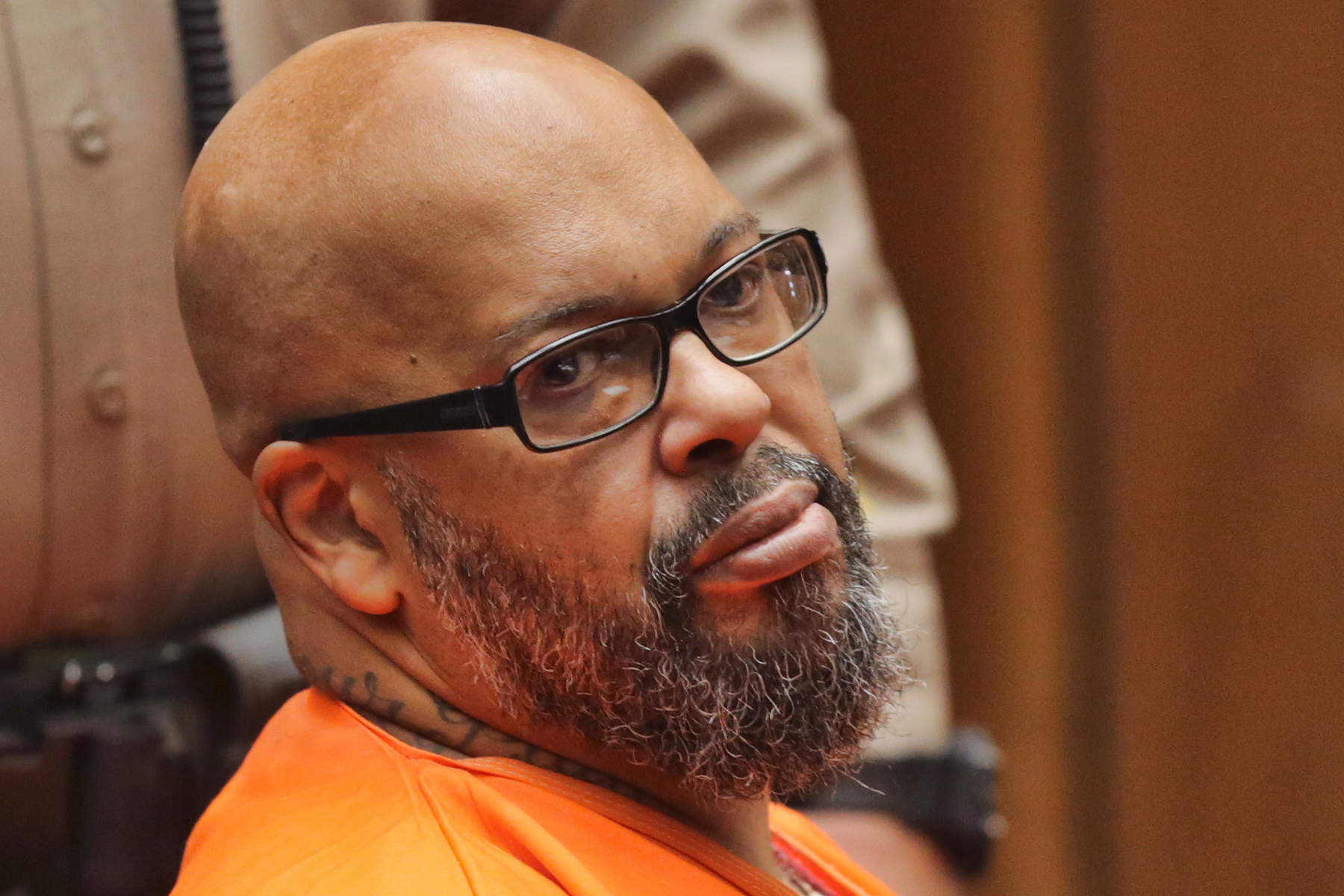 Appearing remotely from a cinderblock room painted neon white, jailed Death Row Records founder Suge Knight testified for the first time Wednesday about the day in early 2015 when he tried — but failed — to get a meeting with Dr. Dre at an office for the movie Straight Outta Compton and ended up barreling his truck into two men outside a nearby burger stand, killing one of them.

Knight, 57, is now serving a 28-year prison sentence for the deadly incident at Tam’s Burgers in Compton, California, that claimed the life of local businessman Terry Carter on Jan. 29, 2015. Prosecutors originally charged Knight with murder, claiming he reversed his Ford Raptor truck before intentionally shifting gears, hitting the gas, and mowing down Carter. The case avoided trial when Knight accepted a plea deal and was convicted of voluntary manslaughter in September 2018.

Knight’s long-awaited, sometimes contradictory sworn testimony was shown live to jurors in a Compton courthouse Wednesday as the centerpiece of his defense in the wrongful death lawsuit brought by Carter’s wife and daughters.

Wearing a gold chain over his blue jail uniform and drinking what looked like an iced coffee out of a large plastic cup, Knight claimed that he practically stumbled upon the Straight Outta Compton production base camp that day and wasn’t seeking a confrontation with Dre — even though Knight testified under oath that police told him Dre hired the man who shot him seven times at Chris Brown’s pre-VMA party six months earlier in the summer of 2014.

“I was told about that,” Knight testified Wednesday when asked about the alleged murder-for-hire contract. “People showed me checks, cancelled checks.”

For his part, Dre has denied the wild accusation. “Given that Dre has had zero interaction with Suge since leaving Death Row Records in 1996, we hope that Suge’s lawyer has lots of malicious prosecution insurance,” Dre’s lawyer said in a 2016 statement given when a lawyer purportedly representing Knight dropped the allegation into a now-defunct civil court cross-complaint.

In his testimony Wednesday, Knight claimed that he never worked with the lawyer who filed the cross-complaint, but he didn’t shy away from the topic of alleged hitmen. He claimed that he ended up at the movie’s production office shortly before Carter’s death because he was driving around “in the area” and an unidentified person told him to “come through” to discuss a “situation” with Dre.

“Dr. Dre — we’ve been really good friends for years. Matter of fact, I know his kids, he knows my kids. And I was told that he had paid some guys to harm me,” Knight testified. “I didn’t believe it because authorities do lie. So I went up there. …I was going to talk to him and say, ‘Hey man, I’m not going to react to what authorities say about you having something to do with me getting shot. I just want to make you aware they are saying this, putting it out there.’”

Knight claimed he wasn’t at the base camp to complain that the movie’s script portrayed him as a “bodyguard” or to demand money for the use of his name and likeness onscreen. He said maybe it would come up — but he mostly wanted a face-to-face with Dre to let him know what police purportedly were saying. He claimed that when he heard Dre and his Straight Outta Compton co-producer Ice Cube were too “busy” for a meeting, it wasn’t a big deal because he had plans to take his 5-year-old son to an arcade. Knight said he was voluntarily leaving the base camp when someone “caught up” with him and said, “Hey, Cube wants you to come (back) because we’ve been trying to catch you to take care of you.”

Knight testified that, when he asked about Dre specifically and said he didn’t want to wait around all day, things started to go sideways. Cle “Bone” Sloan, a gang member working security for the movie, took offense to a joke he made and started to get “aggressive,” Knight said. Around the same time, someone tried to put something on his windshield, he testified.

“Were you ever served with a restraining order that Dr. Dre allegedly had on you?” Knight’s lawyer David Kenner asked after the confusing mention of the windshield.

Knight testified that after he left the film production office for his family outing, he got a call from Carter, a longtime friend. He told jurors Carter invited him to a special meeting with Dre at the home of Dwayne “Knob” Johnson across the street from Tam’s.

“He said, ‘They’re trying to take care of you, get some things squared away. Dre’s gonna come by Knob’s house. Come meet me over there.’ He said, ‘Man they’re trying to give you some bread,” Knight testified, saying he agreed, made a U-turn and headed to the location.

According to Knight, he drove up alongside Carter’s grey station wagon on a street bordering Tam’s and became the subject of an armed ambush. He said Sloan jumped over a wall bordering Tam’s parking lot, brandished a gun and started punching him through his truck’s open window.

Lance Behringer, the lawyer representing Carter’s widow Lillian, and his two daughters, Nekaya and Crystal, grilled Knight over the claim that he “feared for his life” and was acting in self-defense when he gunned his engine and blasted into both Sloan and Carter, killing Carter.

Behringer read from a transcript of Knight’s sentencing in which a judge warned Knight that his “no contest” plea was the same as a guilty plea to voluntary manslaughter. Behringer also pointed out that Knight’s former lawyer, Matthew Fletcher, recently pleaded guilty to conspiracy and perjury after prosecutors said he and Knight plotted to bribe people to say they saw men with guns confronting Knight at Tam’s.

Knight responded that fear “sort of freezes you,” so that’s why he drove forward, backward, and then forward again.

Behringer then confronted Knight with the transcript of his first interview with police after Knight turned himself in for questioning hours after Carter’s death.

“Nowhere in that interview with Sgt. Biddle do you ever mention Bone Sloan pointing a gun at you,” the lawyer said.

“Where I come from, from Compton, and how my parents taught me, being a child of God, it’s not about an eye for eye. …I wasn’t going to say, ‘Hey this person put a gun on me and tried to kill me,’ and put them in custody. But at the same time, once I knew they gave Bone immunity, and he can’t get in trouble, if I told the truth, nothing could happen to him, it’s a different story,” Knight claimed.

“Let me see if I can understand. Sloan, the man who you believe pulled a gun at you, and was trying to kill you, you were trying to protect him by not telling Sgt. Biddle that he had a gun there? Is that accurate?” Behringer asked.

“We all friends. There are different rules that we go by — that you don’t personally try to get one of your homeboys in custody, no matter what the situation is. So therefore, when he got immunity, and he can’t get in trouble, it’s a difference,” Knight testified.

“And you want this jury to believe that Bone Sloan was there to kill you, and he had a gun that he intended to use to kill you, but instead of using that gun, he decided to throw punches. Is that true?” Behringer asked.

“That’s not true at all,” Knight said, launching into one of his more convoluted answers. “The truth is this: Tam’s is called ‘Murder Burger’ for a reason. One thing we all know is, you can’t do anything by the area of Tam’s because of the cameras. …Nobody pulled their gun out by Tam’s. Everyone knows there’s cameras. Ask anybody, they call Tam’s ‘Murder Burger.’ Lots of people who didn’t know they have cameras there, they’re still in prison today.”

“I hadn’t done anything wrong to these guys, for them to want to kill me, but there was a contract,” Knight added as Carter’s daughter, Nekaya — who was seated in the courtroom with her mother and sister — shook her head in disgust.

The Carter family filed the underlying lawsuit in June 2015. It initially named Dr. Dre, Ice Cube and NBC Universal among the defendants, claiming they all knew Knight objected to Straight Outta Compton and intended to commit violence on the movie’s sets. The family alleged the producers hired Sloan to stand up to Knight’s violence and then negligently managed him.

“The court cannot fathom how Knight’s reckless and allegedly criminal attempt to run over Bone with his truck later in the afternoon was predictable with an ‘extraordinarily high degree of foreseeability’ such that a duty may be imposed on defendants,” Los Angeles County Superior Court Judge Brian Currey wrote in a September 2016 decision granting the parties’ demurrers. “The alleged fact that defendants ordered Bone to ‘take control of the situation’ and arrange a meeting with Carter does not make it highly foreseeable that Bone would ‘flank’ and ‘ambush’ Knight by continuing a personal fight with Knight in the presence of Bone’s associates or that Knight would attempt to recklessly and criminally attack Bone with his vehicle, or that Carter would be in any probable danger.”

Knight appeared on camera Wednesday walking both with and without a cane. He testified that he is “100% blind” in his left eye.

“Wouldn’t you agree, Mr. Knight, that if you were driving around without a valid driver’s license, being blind in one eye, and that if you ran over and killed somebody on the sidewalk, you should be responsible?” Behringer asked.

Knight answered that he could “see enough” to drive. “Like right now, I can tilt my head the right way, I can see you, but a different way, I can’t,” he said.

The Carter family’s civil case, seeking more than $10 million in damages, is expected to last into next week before going to the jury.