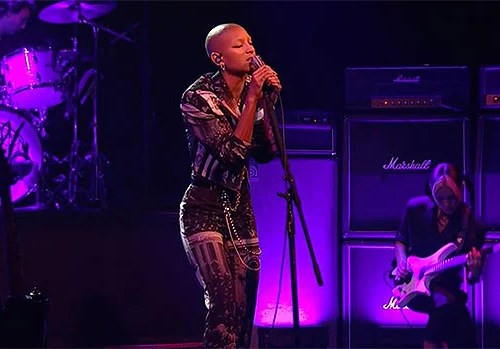 Willow took the the SNL stage like a damn pro — glaring, belting, screaming in her platform Converse and feline black eyeliner. The 21-year-old guitarist and singer began with “Curious/Furious,” a rocker with a seductive build and an indelible intro where she rhymes “I always knew there was an order to this” with “whispering mathematics.” As only Willow would.

Willow Smith, who performs as Willow, has all the trappings of the emo punk genre: the florid lyrics, the emotive bellow, the septum piercing. But what makes her sound more compelling and unpinnable are the hardcore flourishes that only a true creative mind would add, like, a guitarmony-laden extended jam or going full black metal as she did on her subsequent song.

Last season, Willow appeared on the SNL stage with Camila Cabello as a surprise guest to perform their song “Psychofreak,” from Cabello’s Familia. Earlier this week, Willow spoke with Apple Music 1’s Zane Lowe about the huge difference between playing on SNL with Cabello versus performing solo.

“I’m nervous obviously, because being with Camila— a really, really good friend of mine — there’s that feeling of comfortability there where you can look across the stage and be like, ‘Girl, we’re in this together. We’re doing this.’ I’m not baring my soul alone on the stage. But now it’s going to be me baring my soul alone on the stage, and I’m just so grateful and so excited, but also shitting my pants slightly.”