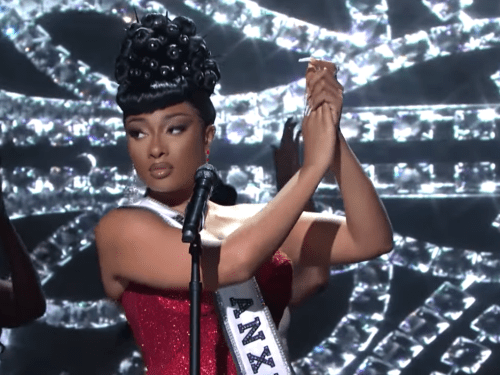 The show’s host and musical guest also drew attention to the website Bad Bitches Have Bad Days Too, a mental health resource.

Traumazine, which came out in August, offers “a motley mix of slick bops and searing confessionals that wonderfully encapsulate all of her various vibes,” as Rolling Stone’s Will Dukes wrote in a review. The 18-track album also features songs like “Sweetest Pie” with Dua Lipa, “Pressurelicious” with Future, and “Who Me” with Pooh Shiesty.

In her earlier monologue, Megan mentioned the mental health website Bad Bitches Have Bad Days Too, which was inspired by “Anxiety.”

The Houston rapper, who spoke candidly to Rolling Stone in an interview in June, last appeared on NBC’s late night show in Oct. 2020 when she performed “Savage.”  Halfway through the song, she called out Kentucky Attorney General Daniel Cameron, who had decided not to bring major charges after Breonna Taylor was fatally shot by Louisville Metro Police officers earlier that year.

The Grammy Award-winner made her SNL debut in 2019, supplying her guest verse to Chance the Rapper’s “Handsome” from his album The Big Day.