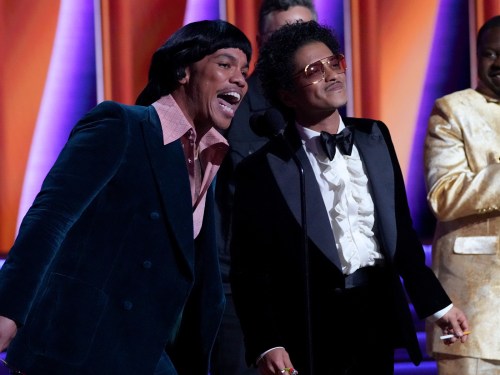 Silk Sonic — the duo of Bruno Mars and Anderson .Paak — will not submit their album An Evening With Silk Sonic for Grammy consideration, Mars reveals to Rolling Stone in a statement.

“We truly put our all on this record, but Silk Sonic would like to gracefully, humbly and most importantly, sexually, bow out of submitting our album this year,” Mars says. “We hope we can celebrate with everyone on a great year of music and partake in the party. Thank you for letting Silk Sonic thrive.”

An Evening With Silk Sonic — released in Nov. 2021 to rave reviews — was expected by critics to receive multiple nominations, and be a top contender for Album of the Year at the 2023 Grammys. Its lead single “Leave the Door Open” swept all four categories it was nominated in during April’s ceremony, including Song and Record of the Year.

Now, Mars says, “we’d be crazy to ask for anything more.”

“Andy and I, and everyone that worked on this project, won the moment the world responded to ‘Leave The Door Open.’ Everything else was just icing on the cake,” he says. “We thank the Grammys for allowing us to perform on their platform — not once but twice — and awarding us at last year’s ceremony.”

“Thank you to everyone that supported this project and championed it,” he adds.

Mars has been a Grammy favorite in recent years. In 2018, he won all six Grammys he was nominated for with his album 24K Magic, sweeping in all the categories his music was nominated. And two years prior, he took home the award for Record of the Year and Best Pop Duo/Group Performance for “Uptown Funk” with Mark Ronson. His first win came in 2011 with his single “Just the Way You Are.”

Along with his Silk Sonic wins, .Paak has taken home four Grammys over his career, including his win for Best R&B album for Ventura in 2020, and Best Melodic Rap Performance for “Lockdown” the following year.

As a duo, Mars and .Paak performed “777” and “Hot Music” from their recent album at this year’s Grammy Awards. They also took the stage in 2021 for “Leave the Door Open.”

A Rolling Stone review described the duo’s An Evening With record as “a glorious excuse to turn out the lights, break out the bubbly and let the sublime power of their almost troublingly uncanny retro verisimilitude work its mimetic magic on your soul and mind.”

In a Rolling Stone cover story last year, both stars opened up about making the record during Covid quarantine, giving both musicians all the time to perfect their record, which fully emulated the soul music of the Seventies.

“[We] did the research,” Mars said at the time, to “get the right things, down to the skins on Andy’s drums. I’ve never realized ’til this album how much the right guitar pick matters. The right gauged strings. All this science kinda stuff.”