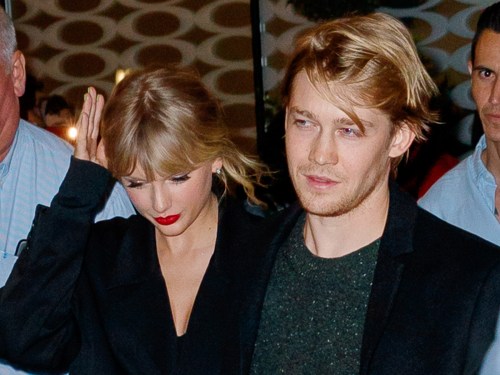 William Bowery is back. The pen name for Taylor Swift’s boyfriend Joe Alwyn is making another appearance in Swift’s music credits — this time on “Sweet Nothing” from her album Midnights, out Friday.

On Tuesday, fans got their first look at the songwriting credits for the album, and as expected, most of the songs include Swift co-writing as a duo with her longtime collaborator Jack Antonoff. Among the tracks written by just the two are “Question…?,” “Bejeweled,” and “Mastermind.”

But the songs with more than two lyricists are “Lavender Haze” and “Karma,” both of which were co-written with Antonoff, Zoë Kravitz, Mark Spears, and Jahaan Sweet.

Kravitz and Swift have been good friends for years, while Spears has won several Grammys for his work with Kendrick Lamar. As for Sweet, he produced Jon Batiste’s Grammy-winning LP We Are.

There’s also “Vigilante Shit,” which Ms. Swift wrote completely on her own, and “Snow on the Beach,” which features writing credits from Lana Del Rey herself. Plus, the aforementioned “Sweet Nothing,” which doesn’t feature Antonoff and only credits Bowery and Swift.

Alwyn — who’s been dating Swift for the last couple of years — has joined the singer in writing for her past albums Folklore and Evermore.

Among the tracks that Alwyn (well, Bowery) has writing credits on are “Exile” and “Betty” from Folklore, and “Champagne Problems,” “Coney Island,” and “Evermore” off Evermore. Alwyn also co-produced six songs from Folklore.

Speaking to Kelly Clarkson back in May, Alwyn shared the reason why he chose William Bowery as his songwriting pseudonym.

“We chose to do it so the people, first and foremost, would listen to the music first before dissecting the fact that we did it together,” he said on the show. “We did it under the name William Bowery… Very fancy. It sounds like a kind of Agatha Christie character that should be wearing a monocle with a big mustache.”

“It was a combination of William … my great-grandfather — who I actually never met — [who] was a composer. He wrote a lot of classical music, and he wrote a lot of film scores,” Alwyn added. “And then Bowery is the area in New York that I spent a lot of time in when I first moved over there. So I stuck them together.”

He’s also opened up about how the two started writing together in the first place: “the most accidental thing to happen in lockdown,” he told GQ Hype.

“It was just messing around on a piano and singing badly and being overheard and then thinking, you know, what if we tried to get to the end of it together?” he said. “It was fun to do together, and I was proud of it. It was nice getting such a positive reception.”