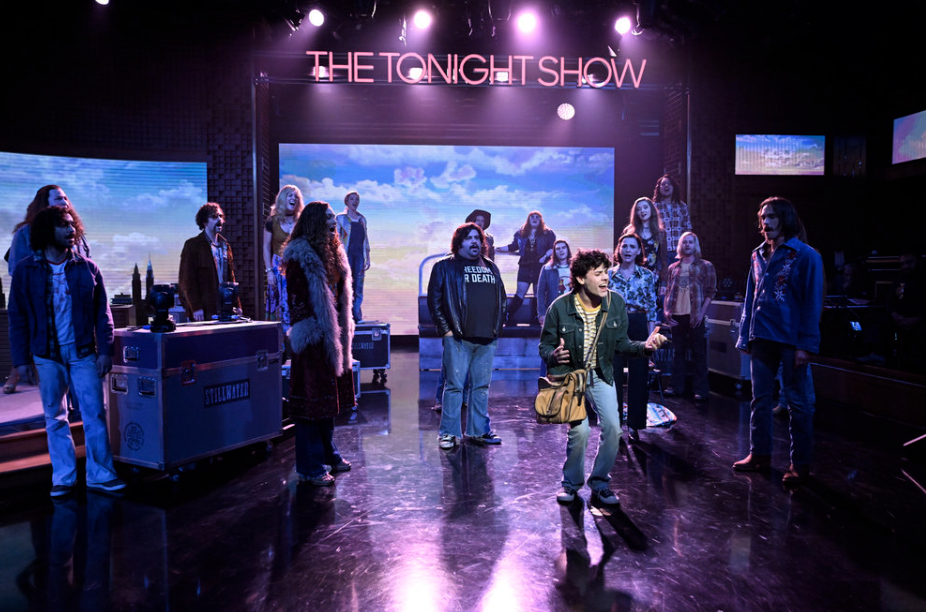 Two days before the Almost Famous musical officially opens on Broadway, the show’s cast appeared on the Tonight Show to deliver their rendition of Elton John’s “Tiny Dancer,” a song which — as any fan of the 2000 film can attest — plays a pivotal role in the story.

The number recreates the beloved tour bus singalong from Almost Famous, which Rolling Stone called the “best-known scene” from the film in our 2020 in-depth look at the sequence.

In addition to the cast performance, Cameron Crowe — the writer/director of Almost Famous film who also contributes to the book and co-wrote the lyrics for the musical — sat down with Jimmy Fallon to discuss the show’s long journey to Broadway, writing the show’s lyrics, as well as invite the host to join the cast. (Fallon appeared in the original Almost Famous in his first big-screen role.)

“Almost Famous is the one thing that I’ve been involved with that had the most recurring fan talk,” Crowe said. “People always want to talk about the feeling that the movie gave them, and I thought if we can get that feeling on the live stage in the theater, that’s almost like the 1973 world that the movie’s based on.”

Crowe and Fallon also discussed how, during filming, Crowe wanted the film to be untitled and have symbols, a la Led Zeppelin, before the Dreamworks publicity department stepped in and forced the director to name it, settling on Almost Famous. However, Fallon first gave Crowe a handwritten list of movie name suggestions, a list that Crowe unearthed for the Tonight Show.

Crowe then invited Fallon to join the musical to reprise his role of Dennis Hope for the musical (as perhaps an understudy because the musical has already cast a “very talented” actor in the role).

Prior to the musical’s opening night on Nov. 3, the production has previously shared the numbers “No Friends,” “Everybody’s Coming Together,” “Morocco,” and “The Night-Time Sky’s Got Nothing on You” — a track inspired by a deleted scene from the film — from the Original Broadway Cast Recording due out on March 17, 2023, via Sony Masterworks Broadway.