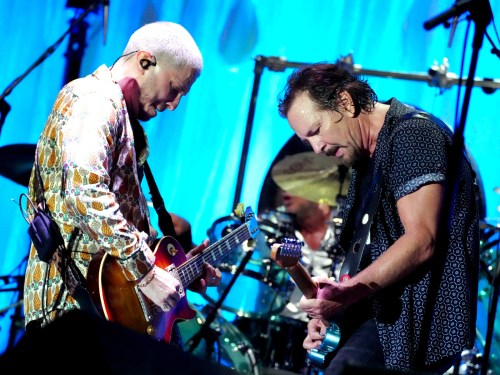 Eddie Vedder concluded a brief run of tour dates with his solo band Earthlings on Friday Oct. 7 in Las Vegas, and the group pulled out a cover of the Cure’s “Just Like Heaven” during the encore. The band first launched their tour in support of Earthling, Vedder’s first solo album in 11 years, in February.

“We’ve never played it before, we only played it an hour ago, right before we came on,” he said of the Cure classic.

Prior to delivering their rendition, Vedder said he was inspired to perform it as it was a song he and his wife Jill played during these “pretty wild” dance parties they held in their garage, just the two of them because they were in lockdown due to Covid.

“I will always have great memories of those incredible dance parties,” he said. “The kids would come in, check on us, and then kind of get embarrassed and then have to leave. But we had a fucking blast.”

Last weekend at Vedder’s Ohana Festival, he paid tribute to Tom Petty to mark the five year anniversary of the musician’s death.