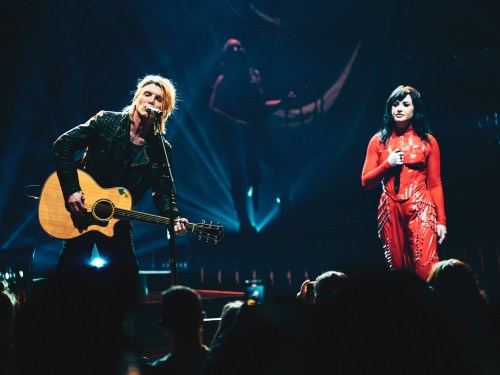 Throughout Demi Lovato’s Holy Fvck Tour, the singer has been performing her own “4 EVER 4 Me” mashed up with a cover of Goo Goo Dolls’ hit “Iris.” And Tuesday night at Lovato’s New York concert, she decided to take the cover to the next level by welcoming Goo Goo Dolls frontman Johnny Rzeznik onstage for a surprise duet of the 1998 single.

Nearly 25 years after the release of “Iris,” the track remains a favorite of a younger generation of artists, with everyone from Taylor Swift to Phoebe Bridgers and Maggie Rogers covering the song; in 2021, Rzeznik was also called upon to perform “Iris” onstage at a Billy Joel concert in the Goo Goo Dolls’ native Buffalo, New York.

In Sept., Lovato also managed to lure Ashlee Simpson onstage for a rare live appearance to cover the singer’s “La La,” which Lovato has also been performing throughout her North American tour. Simpson’s appearance alongside Lovato is her first time on stage since January 2019, which in turn followed a decade-long hiatus from performing live.

Prior to releasing their album Holy Fvck, Lovato spoke to Zane Lowe for Apple Music 1 about the influences on it, including Simpson and Kelly Clarkson.

“I saw the transformation of her as an artist go from R&B soul pop to pop rock. And I was like, wait, that’s what I want to do,” they said about Clarkson, before adding, “And there’s also Ashlee Simpson ‘LaLa,’ and I was like, I want to do that. So I got inspired, and then I found bands like Paramore and Flyleaf.”

Lovato also spoke to Rolling Stone about entering “a new era” of their music. “I’d like to put the rest of my music behind me and start fresh in this new era for this next album,” Lovato said. “I’m not changing with the new music. I’m just going back to my roots!”