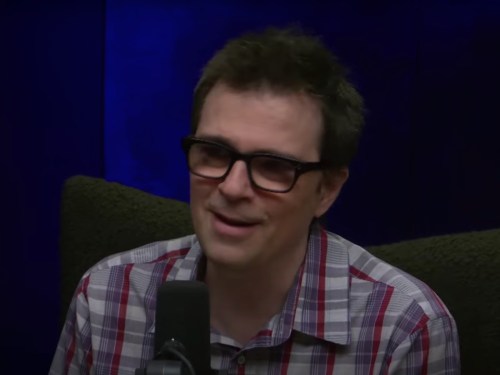 Rivers Cuomo went incognito for most of the first year he attended Harvard University, where his fellow classmates had no idea he was in Weezer, the musician says in the next episode of Conan O’Brien Needs a Friend podcast. The episode hits podcast platforms on Sunday night Oct. 10 beginning at midnight PT.

In an exclusive clip, O’Brien asks the Weezer frontman about the reactions around campus when he went to school there following the success of their 1994 self-titled album, known as the Blue Album. “’Oh shit, that guy over there, who’s in my EC 10 class and who I just saw getting veal parmigiana at the Adam’s House dining room — that’s… he’s a rock star,’” O’Brien says. “Do they know?”

Turns out, he stayed anonymous for some time. “Not until the last day of school because most of our fans at that time were like 10 years old, literally,” Cuomo says. “We connected to a very young group of kids and it wasn’t really like a college audience.

“Also it’s kind of hard to remember, but at that time there was no sense of like me as the frontman or like famous or anything,” he continued. “People knew the name Weezer and they knew a couple songs but that was about it.”

Cuomo says he also didn’t look the part. “I grew a very long beard and long hair, and I was undergoing this procedure on my leg so I was walking with a cane. I just looked like some really weird, super old weird guy,” he says, laughing. “’Why is he in this class?’”

“I’d be riding the bus with other students that were wearing Weezer shirts that didn’t even know — they had no idea it was me,” he adds.

On the final day of classes, Cuomo came clean. “In my music class I remember having a conversation with some other kids and one of them said, ‘So, what are you doing for the summer?’ I was like, ‘Uh we’re going on tour with No Doubt.’”

His classmate asked if he was working on the tour. “’No, I’m in Weezer,’” he confessed. “Minds were blown at that moment.”

Cuomo and O’Brien also discuss the Ilizarov procedure, the painful procedure Cuomo underwent to essentially stretch his right leg to the same length as his left.

Last month, Weezer marked a new season with the release of their SZNS: Autumn EP, the fall phase of their yearlong SZNZ project.