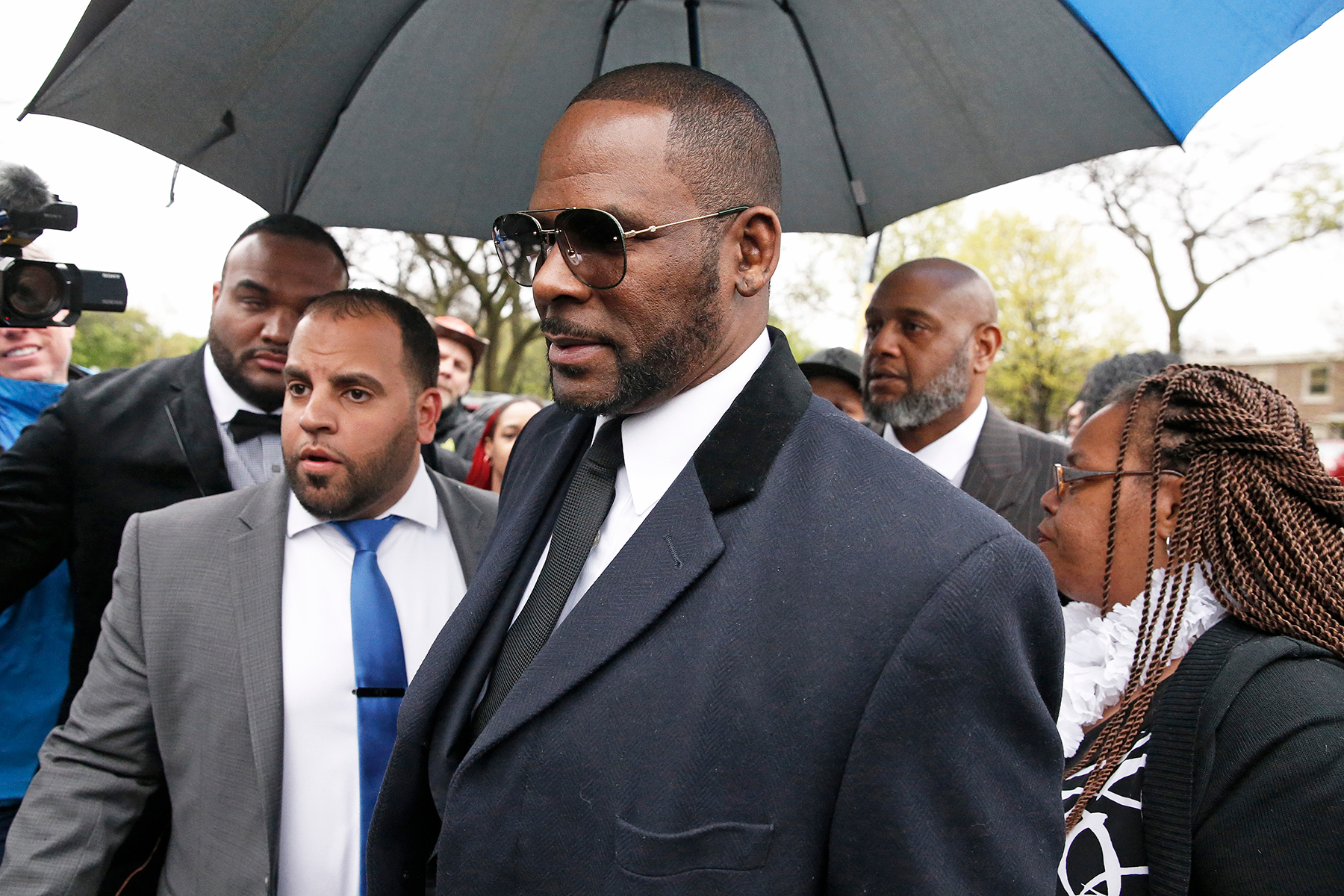 Chicago — R. Kelly appeared in court Monday for the first day of his second trial in Chicago in 14 years. It began with jury selection in his federal trial where he faces child pornography and obstruction of justice charges.

U.S. District Judge Harry Leinenweber questioned nearly 60 potential jurors over six hours at the Dirksen U.S. Courthouse, with a focus on how much they knew about the disgraced R&B singer. The 55-year-old singer was already convicted on racketeering and sex trafficking charges in New York federal court; he was sentenced to 30 years in June and is appealing. A conviction in Chicago could add decades to his imprisonment, essentially equating to a life sentence.

Kelly — bespectacled, dressed in a grey suit, and moving with what appeared to be a slight limp —  appeared alongside his three-person legal team led by celebrity lawyer Jennifer Bonjean, whose controversial clients include Bill Cosby. The pair often consulted, leaning toward each other to whisper information while jury selection took place. Concurrently, his former business manager, Derrel McDavid, and associate Milton “June” Brown, who are both accused of conspiring with Kelly to intimidate and bribe witnesses and cover up evidence in the 2008 trial, are being tried alongside the singer. All three accused have denied wrongdoing.

Add in the prosecution team, and the area flanking Judge Leinenweber resembled a legal eagle bullpen assembly, with each legal team at a table that included flat screens, headphones, and mics that were employed — along with white noise to obscure the sidebars — after nearly almost every potential juror’s questioning, so the judge could gather more questions from the various legal parties to present to the potential jury pool.

By midday break, 40 jurors had answered questions and 16 were excused. Questions centered on whether they could be unbiased and included whether they had watched Lifetime’s explosive 2019 docuseries Surviving R. Kelly or its 2020 follow-up and to what extent. Potential jurors were also asked what they knew about the current trial alongside previous ones.

The prospective jurors ranged in age and occupation, from former lawyers to a welder to educators. One woman said she had watched all of Surviving R. Kelly and a man with a post-graduate degree in classical music said he knew that Kelly is “a musician and that’s all I know”; both parties felt they could be impartial and remained potential jurors. Several said they could not remain unbiased, and were excused. “I’m in education and part of my job is to advocate for children,” one potential juror said; another said they were close to someone who was sexually assaulted; both were excused. Others were excused for hardship. The trial is expected to last a month.

The new federal trial will be revisiting information from the child pornography trial in which Kelly was acquitted in 2008. Back then, a now-infamous videotape of the alleged victim central to both cases depicted Kelly allegedly sexually assaulting the teenager when she was as young as 13 — identified in court documents now as Minor 1 — and she refused to testify in 2008.

Prosecutors at the time believed Kelly and his team conspired to keep the victim and her family quiet, which included alleged tactics such as flying them to the Bahamas when officials looked to question her for the investigation. Fast forward to 2022, and the prosecution is expected to present four videotapes depicting Kelly sexually assaulting the victim, and the victim is expected to identify herself on tapes. She and her mother are also expected to testify about the schemes Kelly and his associates used to silence them. Four other accusers are also expected to testify in the coming weeks.

Prior to the jury selection, Leinenweber detailed his rulings on a bevy of pretrial motions, including one filed by Bonjean on Sunday that requested the court reject jurors that had watched Surviving R. Kelly, which the judge denied. Other motions that were denied included McDavid’s request for more records detailing communications between a former prosecutor and Jim DeRogatis, the reporter who first brought the accusations of Kelly’s alleged sexual abuse of minors to light in 2000. McDavid’s legal team’s argument questioning the chain of custody on one of the videotapes was also denied.

Leinenweber did, however, grant prosecutors’ motion to exclude testimony from a doctor about Kelly having a low IQ.

By day’s end on Monday, some 60 potential jurors had answered queries from the court, and nearly half made it past the first round. The second half of Monday’s proceedings included a former practicing attorney who currently works for Homeland Security who advanced past the first round. A man who said he did not watch Surviving R. Kelly said having grown up in Chicago “my family was pretty invested in it,” but he doesn’t “absorb media drama.” He also made it through the first round.

Jury selection will resume on Tuesday, when opening statements may also take place.