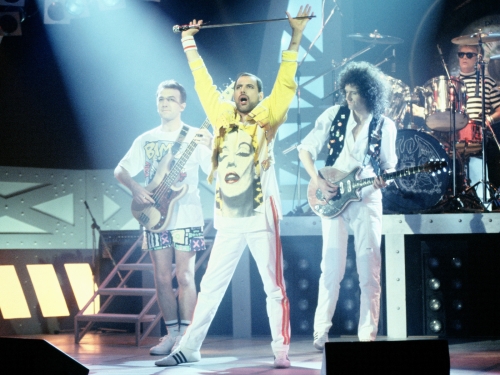 Queen have finally shared the unreleased track that Brian May and Roger Taylor teased earlier this summer, “Face It Alone.”

The smoldering ballad was recorded back in 1988 while Queen were working on their 13th studio album and penultimate release with Freddie Mercury, The Miracle. During those sessions, Queen recorded about 30 songs, but only 10 made it on the album (followed by a couple of b-sides). The others were never released and largely forgotten about.

Queen’s production and archival team discovered “Face It Alone” digging through those old sessions while prepping the upcoming box set reissue of The Miracle (out Oct. 13). Back in June, May and Taylor revealed the track during a BBC Radio 2 interview, with Taylor explaining, “We did find a little gem from Freddie, that we’d kind of forgotten about.”

Getting the track ready for release did require a bit of tinkering, however, with May adding, “It was kind of hiding in plain sight. We looked at it many times and thought, ‘Oh no, we can’t really rescue that.’ But in fact, we went in there again, and our wonderful engineering team went, OK, we can do this and this. It’s like kind of stitching bits together. But it’s beautiful, it’s touching.”

“Face It Alone” is one of six previously unreleased tracks that will appear on the eight-disc Miracle box set, along with “Dog With A Bone,” “I Guess We’re Falling Out,” and “You Know You Belong To Me.” The collection will include a disc of original takes, rough takes, and demos, as well as a trove of “spoken segments” that capture Queen chatting between takes.

The Miracle reissue set will also feature an “alternative” version that recreates a proposed follow-up to The Miracle, a disc of instrumentals and backing tracks of the songs on the original album, and a selection of radio interviews conducted during the era. There’s also a Blu-ray Disc packed with music videos from The Miracle, interviews, behind-the-scenes footage, and more.