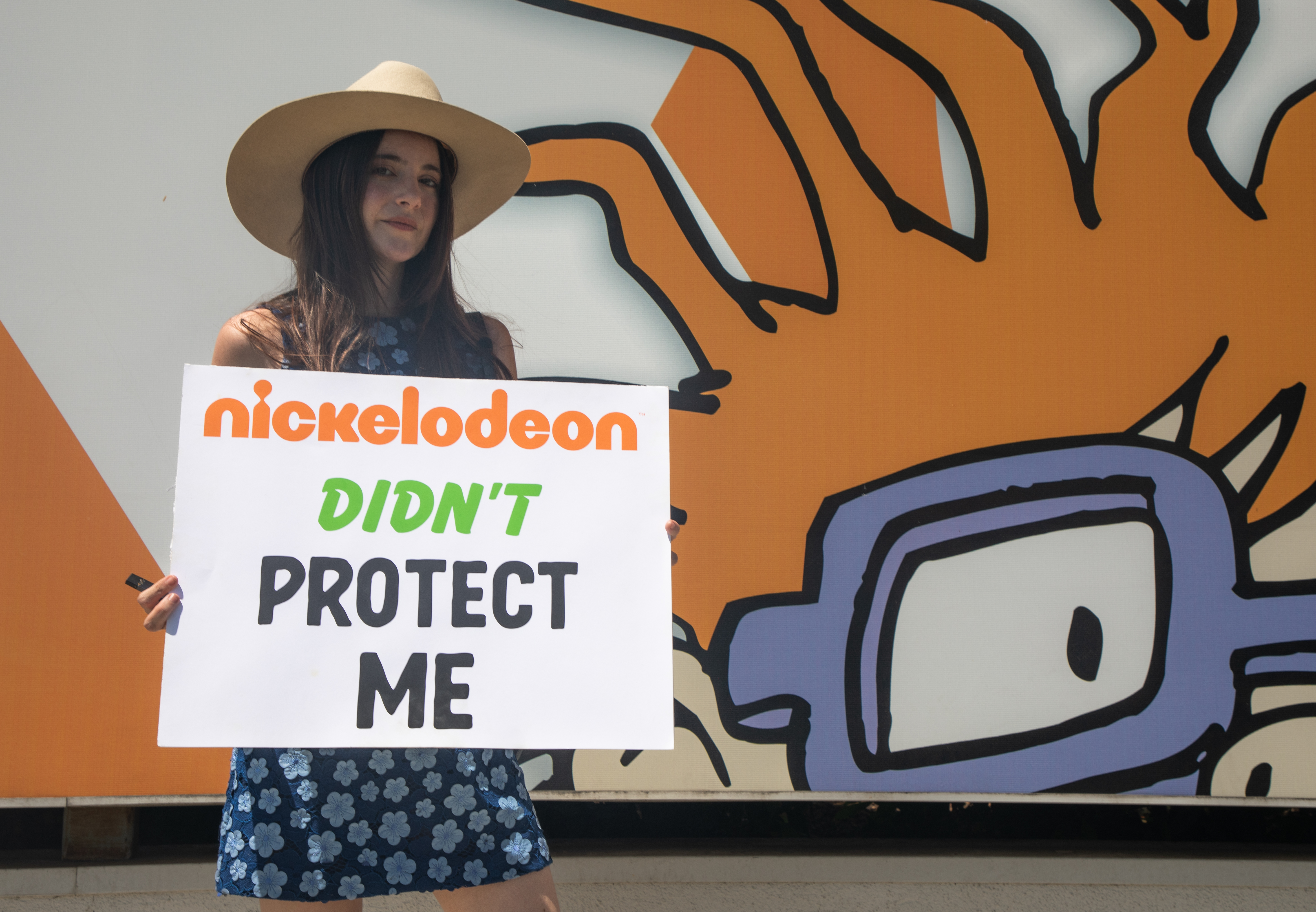 A former Nickelodeon star and nearly 30 protestors gathered outside of the studio’s Burbank office on Thursday, protesting Nickelodeon over what they alleged was an enabling of abuse from executives at the network.

Organized by Alexa Nikolas, who starred in the popular kid’s show Zoey 101 for the show’s first two seasons in 2005 and 2006, the protest specifically called out Dan Schneider, the creator of Zoey 101, alongside other popular Nick shows including iCarly, Victorious and Drake and Josh.

In a poster she designed, Nikolas called Schneider “the creator of childhood trauma,” itself an apparent reference to “The Creator” who former iCarly star Jennette McCurdy referenced in her recent book I’m Glad My Mom Died. (McCurdy never identified The Creator, who she alleged had encouraged her to drink alcohol while underage and claimed had massaged her shoulders without permission.)

“I didn’t feel protected at Nickelodeon as a child,” Nickolas said. “I didn’t feel safe around Dan Schneider; every time he came on set my body got extremely tense. Later on in season 2, him and a bunch of executives made me cry in a room alone. I don’t think any child should have to experience anything like that, especially when it’s coming from people that are supposed to be looking out for the kids on set.”

Beyond the allegations against Schneider, Nikolas also called out former Nickelodeon executives including Fred Savage, who was a director on Zoey 101 and was fired from ABC’s The Wonder Years following an investigation into inappropriate conduct. (Nikolas did not allege any personal wrongdoing from Savage, who told The Hollywood Reporter earlier this month that he “always strived to contribute to an inclusive, safe and supportive work environment. It is devastating to learn that there are co-workers who feel I have fallen short of these goals … I will work to address and change any behavior that has negatively affected anyone.”)

Schneider and Nickelodeon parted ways in 2018 following an investigation that found Schneider could be verbally abusive, though the investigation didn’t reveal any evidence of sexual misconduct. (Neither Nickelodeon nor a rep for Schneider replied to a request for comment.)

The protest is just the latest from Nikolas and the group she’s organized, which is calling itself Eat Predators. The protestors chanted “protect survivors, not predators,” outside the studio and demanded for any person who experienced sexual abuse at Nickelodeon to be released from any NDAs. The group was a mixture of fans of Nikolas’s and alleged survivors of sexual abuse who’d attended previous Eat Predators events. The most notable sign read “Sickelodeon” in front of in the studio’s foot logo, and it included Schneider’s face translucently in the back. Other signs included questions like “Is Nick a Predator?” and “How Many NDAs?” Most of the signs were brandished with Nickelodeon’s green slime.

Eat Predators had previously focused on the music industry, which Nikolas and her fellow protestors say has been relatively untouched compared to the rest of the entertainment industry since the start of the #MeToo movement.

Nikolas’ professional background is in TV, but last year, she sued her ex-husband Michael Milosh of R&B project Rhye, claiming Milosh had groomed and sexually battered her since she was a teenager. Milosh vehemently denied the claims, saying in a statement last March: “I am being hit with horrific and spiteful lies. I reiterate that these accusations are outrageously false and the manipulated stories probably untrue,” he said, claiming that Nikolas had “fabricated her claims and filed [her] lawsuit as soon as [his] spousal support payments ended.” Nikolas withdrew her suit without prejudice earlier this year, though she says she’s planning on re-filing the suit.

Prior to Thursday’s Nickelodeon protest — the group’s largest to date — Eat Predators had gathered outside the offices of prominent music industry institutions, including Sony Music Entertainment, Red Light Management (which still represents Milosh) and Warner Music Group. At Sony and WMG, the message was the same as what they say they want from the entire music business: Release survivors of sexual abuse from their potential NDAs and fire alleged abusers affiliated with the companies.

At Red Light’s offices, where Nikolas and a small group of protestors gathered twice in the past month, they called for the management company to comment on the allegations Nikolas leveled against Milosh, further asking why Red Light continues to represents him. Several women who claim Red Light managed and enabled their alleged abusers were also in attendance, including 25-year-old Alexis Bowling, who sued EDM artist Bassnectar and Red Light last year, alleging that they “solicited underage girls through various means” including social media and fan club programs.

(The case against Bassnectar is ongoing, but Red Light’s part has since been dismissed. Red Light has not represented Bassnectar in over a year.)

“These outrageous claims — which were clearly designed for the media, rather than for the courts — are completely without merit, and we eagerly look forward to proving so,” Bassnectar’s attorney Mitchell Schuster told Rolling Stone last year. Red Light did not reply to a request for comment.

At a protest outside of Sony’s Culver City lot last week, a smaller Eat Predators group of just under 20 protesters accused the music company of being “a safe haven for predators” pointing toward current and former Sony artists accused of sexual misconduct including Diplo and R. Kelly. They also held up a sign of ousted Sony Music Australia head Dennis Handlin, who was dismissed from the company last year following allegations of fostering an abusive workplace. (A rep for Sony didn’t immediately reply to request for comment.)

“The music industry has been complacent in addressing sexual abuse for years,” Nikolas told Rolling Stone at a protest last month. “I’m coming out as a survivor who wants to support other survivors.”

Meanwhile at a demonstration outside WMG’s Los Angeles Offices last month, a significantly smaller group of five protesters including Nikolas called for WMG CEO Stephen Cooper to step down. The group demanded that WMG release any woman who may be under an NDA over sexual harassment allegations from their agreements, highlighting the story of former Warner Records A&R executive Samantha Maloney.

As Rolling Stone reported in March, Cooper allegedly sexually propositioned Maloney at a Grammy party several years ago, before the company paid her $240,000 over a year later as part of a settlement agreement. That settlement included a non-disclosure clause that would ensure her silence on the matter. (Through a rep for WMG, Cooper denied the claim in March. A rep for Warner did not reply to request for comment on the protest.)

“NDAs that cover up sexual harassment allegations aren’t even allowed in California anymore,” Nikolas says, referencing the 2021 law that expanded restrictions against corporations in the state from using NDAs to silence employees who allege sexual harassment in settling lawsuits and administrative proceedings, though the law stops short of addressing NDAs that had previously been signed. “We’ve deemed [NDAs] to be wrong, but any victim who signed one in the past is still silent. Women should be allowed to come forward without fear of punishment.”