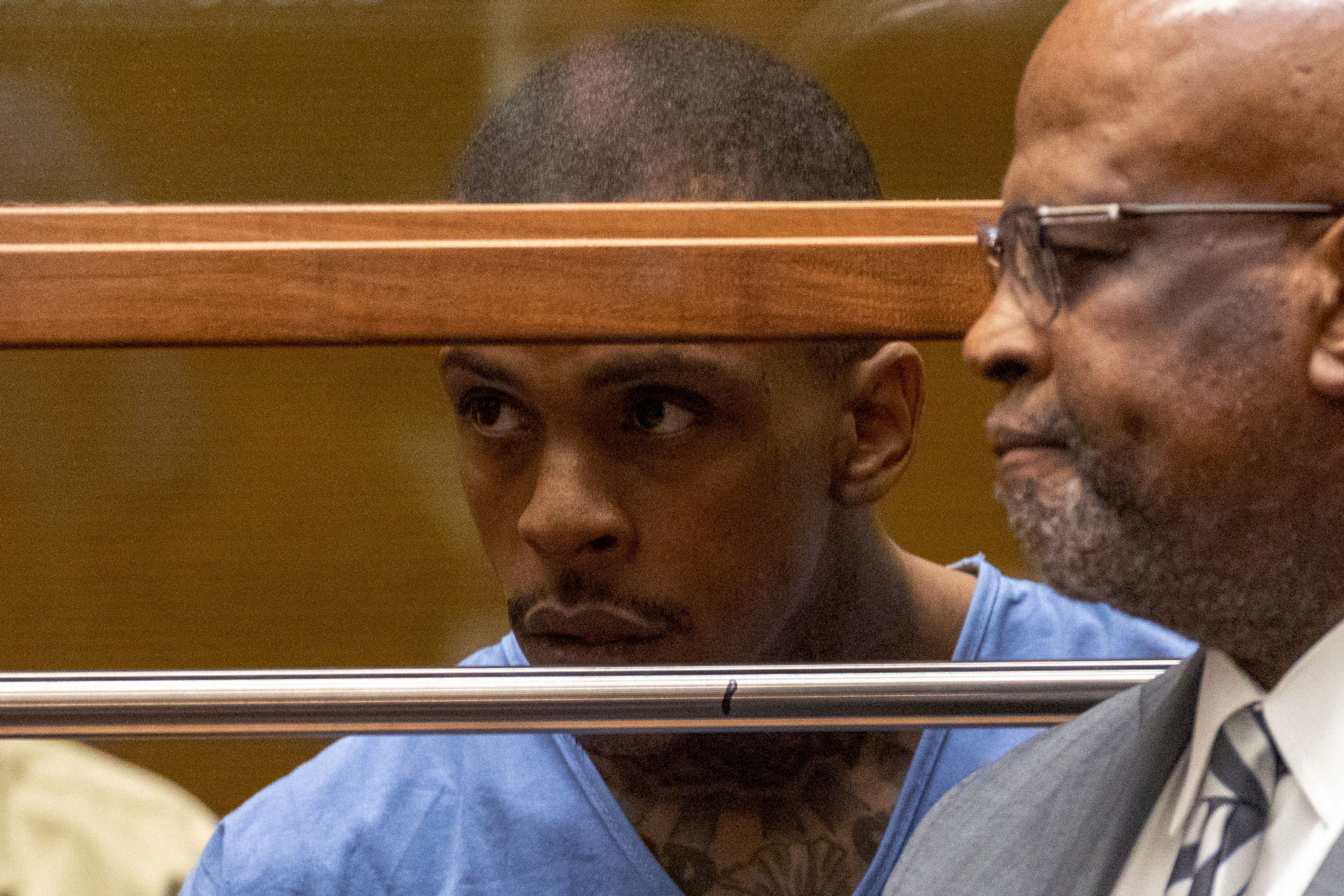 The man accused of gunning down Nipsey Hussle doesn’t deny he shot the celebrated rapper in a stunning strip-mall slaying three years ago — only that it was a premeditated and deliberate murder that also involved the attempted murders of two other men, his lawyer said Wednesday in an opening statement that shed new light on his defense strategy.

“This is a case about the heat of passion,” public defender Aaron Jansen told jurors in a Los Angeles courtroom. “On March 31, 2019, Eric Ronald Holder Jr. shot and killed Nipsey Hussle on Slauson and Crenshaw, in front of a clothing store, Marathon clothing.”

Holder, 32, watched quietly at the defense table as his lawyer spoke. He was dressed in a blue suit and white sneakers in place of the jail uniform he’s worn since his arrest two days after Hussle’s death.

“The heat of passion in this case relates to the snitching, an accusation by Nipsey Hussle that Mr. Eric Holder Jr. was a snitch,” Jansen said. “In the gang world, in the criminal world, there are images from movies, Scarface, where rats, or snitches, have gotten their just desserts.”

As Jansen spoke, an image from Scarface showing a man in a noose appeared on a large TV in the courtroom. The scene involved a character who snitched being hung from a helicopter for the cardinal sin of gang life. Deputy District Attorney John McKinney objected to the chilling image, and Jansen moved on.

By now, the rough outlines of the criminal case are well known. Holder was captured on multiple surveillance cameras driving up to the store, which Hussle co-owned, in the passenger seat of a 2016 White Chevrolet Cruze; talking to Hussle in the parking lot; leaving to get some food; and returning to the scene toting two guns that he used to open fire on Hussle as the celebrated rapper leaned against a car next to the two other alleged victims in the case, Kerry Lathan, who ended up shot once in back, and Shermi Villanueva, who allegedly suffered a graze wound after a bullet struck his belt buckle.

McKinney told jurors they would hear from at least two witnesses that Hussle and Holder’s initial conversation involved the two longtime members of the Rollin’ 60s gang discussing “something to do with snitching.” One witness is expected to say Hussle told Holder that rumors were circulating that Holder was a snitch and that he needed to “get that cleared up.”

McKinney said Holder left that initial meeting with his female friend driving the Cruze. He ate some chili cheese fries, told the friend to wait for him in a nearby parking lot and stalked back to Marathon with a black semiautomatic handgun in one hand and a smaller silver revolver in the other, the prosecutor said.

He played black-and-white video of the shooting to the jury twice during his opening statement, once at a slower speed.

“The only thing that was said prior to the shooting was [when] Eric was walking in between the two cars, looking at Nipsey and saying, ‘You’re through.’ And Nipsey, after being shot, responding, ‘You got me,’” McKinney said, telling the jury that his office charged “not just murder but premeditated and deliberate murder.”

“You’re going to hear and see evidence that he had plenty of opportunity to think about what he was going to do before he did it,” the prosecutor said. “From the time he got out of the car and all the way back to that strip mall and walked up to those gentlemen and started shooting and shooting and shooting.”

He pointed out the shocking moment just before Holder ran from the scene, when he hovered directly over Hussle’s body crumpled on the asphalt and appeared to kick him in the head.

“I think you will find by that kick to the head at the end that it was a very personal attack,” he said.

Jansen said Wednesday that Lathan was hit accidentally, and while “Mr. Villanueva may have been grazed, we’re not sure. He didn’t give a statement to the officers. He refused to be interviewed.”

The public defender previously told Rolling Stone he believed the counts of first-degree attempted murder “would more appropriately be charged as assault with a deadly weapon.”

Hussle, born Ermias Asghedom, arrived at his store “unannounced” the day of the shooting and was talking with friends when Holder appeared unexpectedly, authorities have said.

Asghedom, who won two posthumous Grammys for his songs “Racks in the Middle” and “Higher,” grew up in South Los Angeles and was known for pouring his time and money back into that community. Before his death, he’d been nominated for a Best Rap Album Grammy for his acclaimed Victory Lap album and attended the February awards show with his partner Lauren London and daughter Emani.

In a December 2018 interview with Rolling Stone, he shared why the project meant so much to him: “There are life stories on there. You look at other albums that have been recognized in the past and you see the same quality. I know it’s my music, and I’m close to it, but I’m a fan of hip-hop, and I know what good rap music sounds like. It reminded me of moments I’ve had with classic rap albums.”