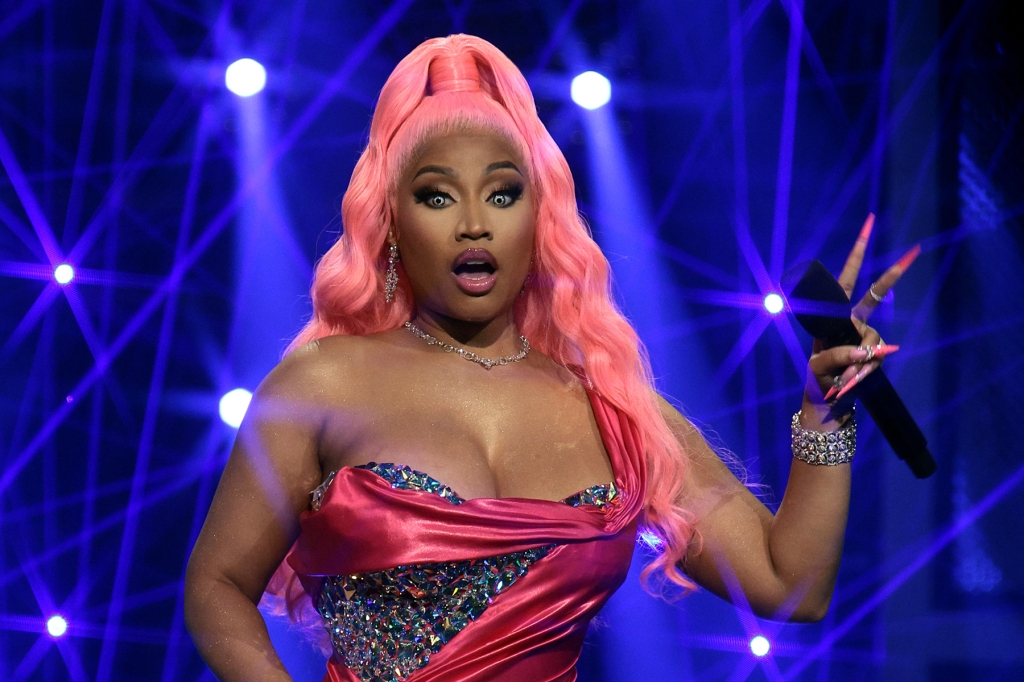 Nicki Minaj has been quite active online since the release of her “Super Freaky Girl” remix on Friday, a new version of her first unaccompanied No. 1 featuring a roster of women rappers: City Girls’ JT, BIA, Katie Got Bandz, Akbar V, and Maliibu Miitch. Since then, she’s posted several comments under an Instagram post by the Shade Room, streamed a dramatic edition of her Queen Radio show, engaged with fans harassing someone who criticized her (that should sound familiar) and claimed to be preparing a defamation lawsuit, at least, in part, because of online allegations that she’s used cocaine. Minaj’s name trended on Twitter today alongside the phrase “its [sic] giving coke” and a hashtag promoting her upcoming single with Alabama artist Bleu.

A day ago, instablog the Shade Room (shadily) collected tweets by rappers Coi Leray, Asian Doll, Lakeyah and Minaj into one post. All four women seemed to posit that unnamed others were behaving insincerely or with malice. Minaj’s tweets — including one about “bitches” hating on herself and the women on her remix — came last in the slide show.

Taking issue with the collection, Minaj hopped in the comments, with notes like “ENTITLED CRYING ASS JEALOUS ASS HOES” and announced that she would be airing an edition of her Queen Radio show, a boisterous, talk-heavy broadcast once distributed through Apple Music but since moved to Amazon’s audio app, AMP. A few minutes into Sunday night’s show, Minaj opened with a prayer: “Lord, we ask that everyone who is listening to this show with bad intentions, with evil spirits, that by the time they hang up, their problems multiply by 55,000 in their lives.”

Calling this edition her “Tea Party” (tea being a colloquialism for gossip), Minaj took shots at unnamed women in music, at one point saying, “So many of you girls that just came in the game, as soon as y’all find y’all pissy tails on Billboard once or twice, y’all begin to say things about me in subtle ways and that’s why a lot of you pissy tails got unfollowed today. See, we’re going to be upfront and direct 2022. You know why? Because Onika don’t give a fuck, that’s why.”

Minaj also told a story about an “opportunist” she “associated with,” immediately followed by a claim that when she had refused a drink from someone while she was possibly — and actively trying to get — pregnant, that person told her, “Oh girl, you can go to the clinic!” As rumblings of a fued between Megan Thee Stallion and Minaj have circulated around Twitter, one person on the platform then wrote to Megan, “Nicki Minaj is accusing you of encouraging abortion & child endangerment w/ alcohol.. This isn’t something to stay quiet on.” Megan responded with one word: “LIE.”

Then, today, while celebrating the success of “Super Freaky Girl” and upping her next release, “Love in the Way” with Bleu, Minaj retweeted and liked many messages from fans, including some attacking cultural commentator Kimberly Foster. Foster had tweeted a criticism of her latest hit and her MTV Video Vanguard Award performance in late August, and said the rapper is “so clearly a horrible person” today. In turn, Foster shared screenshots of Minaj’s fans flooding her phone with harassment and threats, including sexual violence, robbery, and kidnapping. Minaj liked tweets that said “Where’s the threats? All I see is people telling you to leave Nicki name out ya mouth & tweets btch [sic]!” and “This is exactly what you get for speaking on her without checking the whole story before. I am absolutely not sorry for you.”

Other tweets of Minaj’s implied that she is pursuing a defamation suit against unnamed targets with the help of her fanbase. “​​The Barbz sent folders & folders full of evidence to my lawyer. That’s why I fkng love my babies so much,” she wrote. “I hope when you go bankrupt that you can at least say it was all worth it.”