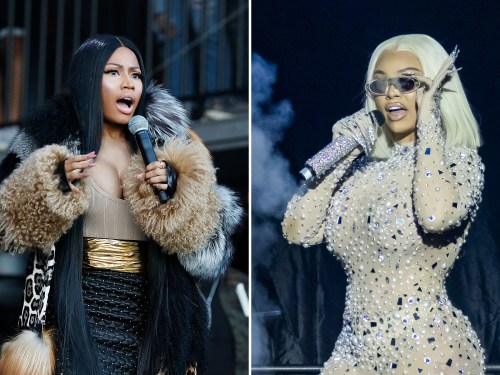 Another day, another Twitter tiff between rappers. This time, the fracas is between Nicki Minaj, the ever-polarizing rap icon seeking more Grammy gold with “Super Freaky Girl,” and Latto, the buzzing Atlanta MC whose “Big Energy” hit is one of the biggest songs of 2022. The drama started with Nicki Minaj railing against the Recording Academy’s confusing decision, as first reported this week, to consider “Super Freaky Girl” in the 2023 Grammys’ pop categories instead of its rap categories. The Queens rapper took to Instagram Live to express her ire — and Latto ended up in the way.

“’Freaky Girl,’ where I only rapped on the song, was removed from the rap categories at the Grammys,” Minaj sarcastically noted. “They stay moving the goalpost for me, because in order to uplift the people they want to shine…they have to elevate someone that they profit off.” She then compared “Super Freaky Girl” to Drake’s “Hotline Bling,” a smoothly crooned, oft-covered track that won Best Rap Song and Best Rap/Sung Collaboration Grammys in 2016, and asked, “what is [Latto’s] ‘Big Energy?’ If ‘Super Freaky Girl’ is a pop song, what genre is ‘Big Energy?’”

Minaj later reiterated her point on Twitter, posting, “I have no prob being moved out the RAP category as long as we r ALL being treated FAIRLY. If SFG has 2B moved out RAP then so does Big Energy! ANY1 who says diff is simply a Nicki hater or a troll. I’d actually LUV 2 c a more street record win- male OR female! IJS.”

That might have been that — until Latto tweeted, “Damn I can’t win for losing… all these awards/noms I can’t even celebrate,” a line that many onlookers perceived as a response to Nicki’s commentary on the Grammys.

Nicki responded with a barely subliminal shot at Latto, tweeting, “This Karen has probably mentioned my name in over 100 interviews. Says she waited in line for Pink Friday w/her Barbie chain on, bangs, pink hair..but today, scratch off decides to be silent; rather than speak up for the Black woman she called her biggest inspiration.” The since-deleted tweet also came with a screenshot, purportedly of Latto sending her a message noting, “I agree with you, however because of where we left off ion think u need to bring my name/song up to prove ur point.”

An apparently agitated Latto then tweeted, “1st of all I texted u cause I didn’t wanna do the internet sht w sum1 I looked up to. Just like the 1st time I DMed u asking about ur ongoing subtweets. I wanted to speak up cuz like I said I do agree but the way u going about it seems malicious esp. after how we left off.” Latto added, “With all this being said this wasn’t JUST about a Grammy category. U being funny bringing me up to defend ur case knowing our last convo didn’t end on good terms. U literally told me I’m not ‘flourishing’ and no one cares about my ‘little song’ otp lol.” The back-and-forth carried on through the night, exposing more screenshots of DMs between the two stars, Latto alleging that Nicki had been making subliminal tweets about her, and the two throwing around allegations of the other having co-writers. Latto has always been a vocal fan of Minaj, and even acknowledged sending songs to her in hopes of a collaboration, but it appears an idol has become a rival.

Their flare-up is the latest example of rap stars getting into viral Twitter spats, with City Girls’ JT and Cardi B, Nicki Minaj and Cardi B, Asian Da Brat, Lakeyah, and others jumping into the fray in recent weeks.

It’s worth considering that many of these artists share the same flock of fans  — until dividing lines of standom are drawn. Nicki Minaj’s Barbs are particularly fervent about advocating for her, consistently working together to rev her songs to the top of the charts, and placing anyone who’s slighted her in their crosshairs for perpetuity. And they don’t just go at rappers. Her most overzealous stans have drawn attention for harassing journalist Wanna Thompson and YouTuber Kimberly Nicole Foster, who recently incurred death threats and doxxing after she called Minaj a “horrible person.” (Foster has said she’s taking legal action.)

Some hip-hop heads have contended that these artists should rise above petty tweets and take their gripes to the booth, which might at least yield an entertaining diss track. Still, there’s the question of whether it’s worth it for Latto or another rising artist to wage war on Nicki, and by extension the Barbs. Women in rap already have to navigate an industry ridden with misogyny, where male peers proposition them for features and male fans disrespect them. In the age of stan wars, a diss track toward a big enough artist could obliterate large chunks of an artist’s fanbase. If one isn’t Cardi B, who’s a proven platinum act, how many labels would OK a move like? Tweets are ephemeral and can be forgotten, but outright diss songs can be messier to overcome, which is probably one reason why so many of these spats unfold on Twitter.

Minaj has deleted her tweets toward Latto, but the Atlanta rapper is still going: On Friday, she called Minaj a “40 Year Old Bully” and declared on Twitter, “I’ll die on this hill by myself! Everybody ain’t lying on you! We see the pattern! BFFR!”

It’s a shame that no one is taking a closer look at the main culprit here: the ever-bungling Grammy committee. This isn’t the first example of their inability to properly categorize Black music, especially from rappers. As Minaj noted in her Instagram Live session, Drake was confused about why “Hotline Bling” won a rap Grammy, telling DJ Semtex in 2017 that “I’m a Black artist, I’m apparently a rapper, even though ‘Hotline Bling’ is not a rap song. The only category that they can manage to fit me in is in a rap category, maybe because I’ve rapped in the past or because I’m Black.”

Tyler, The Creator expressed similar discontent with the Grammys over his 2019 album Igor, calling their decision to name the melodic, R&B-inspired project 2020’s Best Rap Album a “backhanded compliment.” During a post-Grammys press conference at the time, he said, “It sucks that whenever we — and I mean guys that look like me — do anything that’s genre-bending… they always put it in a rap or urban category. I don’t like that ‘urban’ word — it’s just a politically correct way to say the n-word to me.”

Perhaps, by considering “Super Freaky Girl” a pop song, the Grammy committee was attempting to atone for those past mistakes; instead, they’ve ended up slighting a woman in rap by deeming her rap song not rap enough. (The Recording Academy did not respond to a request for comment for this story.)

The Grammys seem to have dug themselves another hole. But instead of coming together to slam their mistake, Nicki and Latto are grappling with each other.