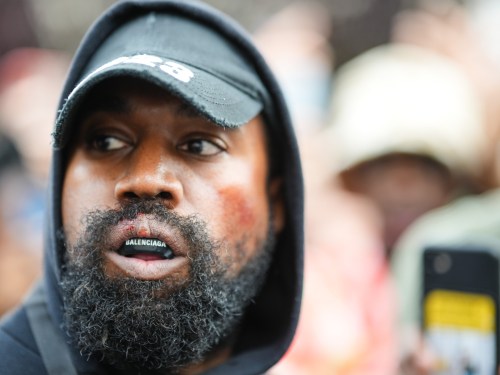 Rapper and Drink Champs host N.O.R.E. popped up on The Breakfast Club to attempt some serious damage control over Kanye West’s comments about Jewish people and George Floyd’s death during the most recent episode of his podcast.

Off the bat, N.O.R.E. apologized for West’s false claim that Floyd wasn’t murdered by former police officer Derek Chauvin, but was killed by fentanyl. “I support freedom of speech, I support anybody not being censored, but I do not support anybody being hurt. I did not realize that the George Floyd statements on my show were so hurtful. And you gotta realize, it was the first five minutes of the show, when he walked in, he told my producer, if they stop filming, he’ll walk out.”

N.O.R.E. continued, claiming he tried to rebuff West later in the show: “But later on, I actually checked him about the George Floyd comments, I actually checked him about the ‘White Lives Matter’ [t-shirt], but it was so later in the episode, I was already inebriated at that time, that maybe people looked over it. But I apologize to the George Floyd family, I apologize to anybody that was hurt by Kanye West’s comments.”

For their part, Breakfast Club hosts DJ Envy, Angela Yee, and Charlamagne tha God, pushed back, stating that West’s comment about Floyd’s death was a “lie” and “misinformation” and not an issue of “free speech.” They also asked N.O.R.E. why Drink Champs even aired the interview, especially when The Shop had pulled its episode with West over his “hate speech,” and that Tucker Carlson edited out West’s numerous antisemitic remarks from their two-part interview.

N.O.R.E., in turn, insisted that “other than the George Floyd comment, I thought I conducted a very great interview.”

When asked directly about West’s antisemitic comments on Drink Champs, N.O.R.E. said there were “four Jewish people in the room” and that he “looked at them to tell them, like, ‘Yo, tell me whenever he’s going across the line.’ And they’re looking, and they’re saying, ok, we understand where he’s coming from.”

Later in the interview, N.O.R.E. was asked what he made of West’s current mental health state, and said he believed the rapper was “having a mental breakdown,” though noted his ability to still “have a straight conversation… with nothing but sense.” Charlamagne, however, pushed back and said it’s possible for someone to be struggling with mental health issues and still be a “bigot” and “a Black white supremacist.”