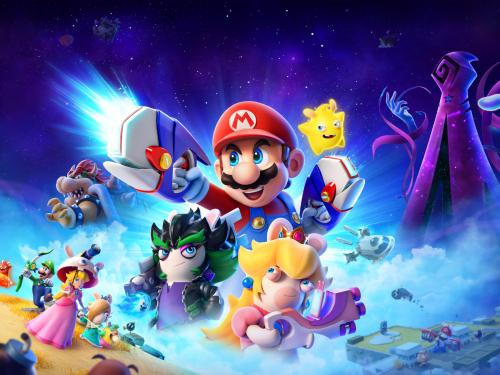 Hot off the heels of the debut trailer for his feature film, Mario is back on Oct. 20 with a wild new game for Nintendo Switch, Mario + Rabbids Sparks of Hope.

The game is the sequel to 2017’s shockingly good strategy game Mario + Rabbids Kingdom Battle, which saw Nintendo’s mustachioed mascot team up with the Minions-esque Rabbids (themselves a spin-off of the Rayman series). Published by Ubisoft, that game took a surprising twist by merging both series into an XCOM styled strategy game that somehow stuck the landing with whimsy to spare, and would go on to become one the Switch’s most-played games not published by Nintendo.

And now it’s back with a sequel that looks to evolve the first game’s mechanics as well as double down on the cheeky aesthetics that worked well the first time around. A huge part of that aesthetic is the music, itself the work of three composers — Yoko Shimomura, Grant Kirkhope, and Gareth Coker — all collaborating with the game’s Audio Director, Romain Brillaud.

For more coverage of the game’s score, tune into our Twitch livestream tomorrow, Tuesday Oct. 18, at 4 p.m. EDT for an interview with Coker himself and Audio Director Romain Brillaud, wherein the duo will breakdown a number of tracks and discuss their creative process. Follow us on Twitch to join the chat and send drop questions for the fan Q&A. To continue the chat 24/7, join our Discord server.