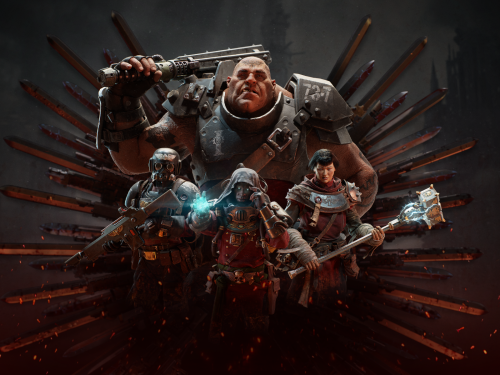 Fans of Warhammer 40,000 world are basking in The Emperor’s Light this fall in the lead-up to the series’ next major video game launch, Darktide. Developed by Swedish studio, Fatshark, the upcoming first-person shooter continues the trend of blood-soaked four-player cooperative bedlam that the team initially delivered with the dark fantasy titles Warhammer: End Times – Vermintide and Warhammer: Vermintide 2. Set in the endless inter-species war 41st Millennium, Darktide centers around the hive city of Tertium, with players teaming up to battle vicious hoards on behalf of The Imperium — an authoritarian in-game government that’s trying to hold together a decaying galactic empire.

To bring the futuristic (and brutal) world of Warhammer to life, Fatshark has enlisted none other than BAFTA-award winning composer, Jesper Kyd, to score the game with a haunting, pulse-pounding soundtrack. Check out an exclusive preview of the score below with a track titled “Immortal Imperium.”

Speaking to Rolling Stone about the track, Kyd stated, “Immortal Imperium is written as a hymn to the everlasting Imperium. The Imperium is ruled by the Emperor of Mankind, ruler of 1 million worlds. 40,000 years into the future, the complete devotion to the Emperor is unconditional and unwavering. This music celebrates his glorious divinity.  The track features a rousing performance by the Budapest Scoring Choir.”

Following the previous release of tracks “Darktide Main Theme” and “City of Tertium,” it’s clear the direction the composer is leaning into. All three of the tracks have synth-heavy overtones with a tinge of ethereal horror, perfectly suited to the gruesome white-knuckle gunplay of the game.

Discussing the score with NME, Kyd explained his approach to the score. “The music needed to sound like it could exist in the year 40,000, so we knew we had to create something really out there and unique, something that sounds like it’s from a distant future with totally different priorities than what we are accustomed to. The main theme embraces the sound of dark folk music mixed with a thundering analog sequencer synth bass line. The Imperium proclaimed “reject” you play in the game, with “nothing to lose”, is celebrated in the music as a call to arms. The tagline of Darktide is “Rejects will Rise” and throughout the game you rise from prisoner of the Imperium to a valuable member of the Imperium. This is reflected in the music. The bassline is the driving force of the underground vibe instilled in much of the score. In short, the uplifting parts of the cue is about celebrating who you are, where you came from and being given a second chance.”

Initially published in 1987, Warhammer 40,000 began as a sci-fi offshoot of the tabletop miniature fantasy war game Warhammer, produced by Games Workshop. While the original traffics in elves, orcs, and the dawning age of Man, Warhammer 40k is set in a bleak future where a human empire — one with dubious moral standing — battles on unceasing onslaught of alien and supernatural attacks. Both series have since become multimedia juggernauts with far reaching expansion into novels, role-playing and video games, television, film, and more. Warhammer 40,000: Darktide launches for PC on Nov. 30th, with an Xbox Series X/S release expected “shortly after.”