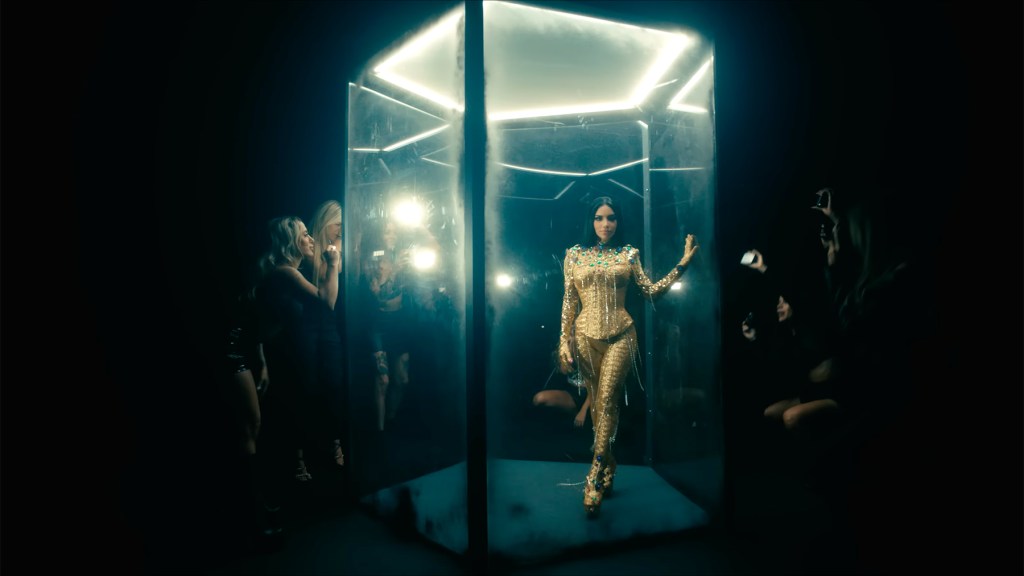 Despues de las 12, anything can happen — even hearing a música Mexicana artist perform on a reggaeton track. That happened on Thursday, when [ID THEM] Kim Loaiza and Ovi premiered the music video for their song “Después de las 12,” which features a verse from Grupo Firme’s Eduin Caz and one from Chilean artist Pailita.

In a video directed by Guillermo Figueredo, the four artists hang out in a futuristic warehouse as Loaiza sings from inside a glass cage, surrounded by women taking photos of her. The end of the video shows Loaiza in an AR-like video game before Caz jumps in with a surprising verse at the end of the song as he pours beer into a woman’s mouth in true Firme style.

Caz shows off his previously unexplored rap ability through a surprising verse: “Ahora vive poca madre, no depende de un cabrón, Ella baila como quiere, pero se le respeta.” (In English: “Now she has a great life, she doesn’t depend on any fucker. She dances how she wants, but she’s respected.”)

“Después de las 12” is the first taste of Caz’s plans to step into other genres outside of música Mexicana. “I’m so excited because this is the first time branch out of regional Mexican music but I’m sure you’ll love it,” he wrote on Instagram ahead of the song’s release.

In a recent interview with Rolling Stone, Caz said Firme would experiment with genres outside of what the band is used to: reggaeton, huapango, even trap. “If it doesn’t work, at least we tried,” he told Rolling Stone. “I’ll go home with a smile on my face because I like challenges.”

The “Después de las 12” remix also cements Loaiza as a rising female force in Latin music. She stepped into the industry in 2019, harnessing her fanbase as a social media personality to pursue music. Earlier this year, she worked with the singer Lele Pons on “Piketona,” and released “Mejor Sola” with the famed reggaeton dup Zion & Lennox last year.

Meanwhile, Ovi teamed up with Ryan Castro on “Clásico” and “Dunks” with Jon Z and De La Ghetto, earlier this year. He also joined Ozuna on “Envidiosa” in 2021.