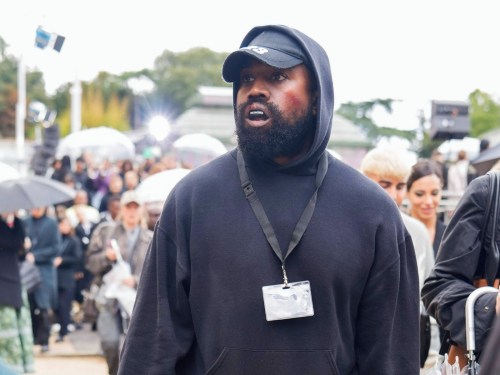 Kanye West’s recently-taped episode of the talk show The Shop has been pulled, with one of the hosts, Maverick Carter, telling Andscape that West used the show to spout off more “hate speech.”

In a statement shared Tuesday night, Oct. 11, Carter said that after booking West several weeks prior, his episode was taped on Monday, Oct. 10. “[A]fter talking to Kanye directly the day before we taped, I believed he was capable of a respectful discussion, and he was ready to address all his recent comments,” Carter said. “Unfortunately, he used The Shop to reiterate more hate speech and extremely dangerous stereotypes.”

While Carter didn’t specify exactly what West said, sources reportedly told Andscape that West continued to make antisemitic comments during his appearance. Such remarks — including a wild tweet where he said he was going to go “death con 3 on JEWISH PEOPLE” — have already led to a ton of condemnation and West having his Twitter and Instagram accounts restricted (several of his posts have also been removed).

As a result of West’s comments, Carter continued: “We have made the decision not to air this episode or any of Kanye’s remarks. While The Shop embraces thoughtful discourse and differing opinions, we have zero tolerance for hate speech of any kind and will never allow our channels to be used to promote hate. I take full responsibility for believing Kanye wanted a different conversation and apologize to our guests and crew. Hate speech should never have an audience.”

Along with West, the axed episode was reportedly set to feature shoe designer Sales Bembury and the rapper Jeezy. LeBron James, an executive producer and frequent co-host, was reportedly not present at the taping.

The Shop’s decision to pull its episode with West stands in sharp contrast to the decision of Fox News just heavily to edit West’s recent two-part conversation with Tucker Carlson. While West and Carlson’s chat featured plenty of controversial topics — including West’s Fashion Week “White Lives Matter” shirt — Vice uncovered an array of footage left on the cutting-room floor, in which West made several more antisemitic remarks.