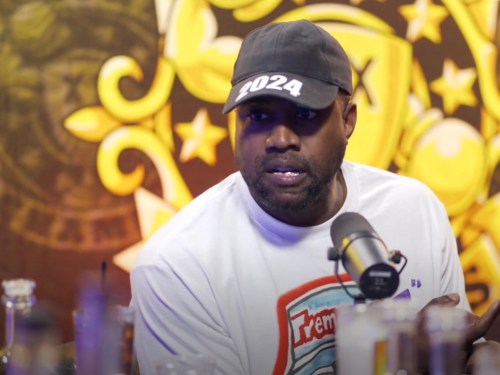 After a controversial and troubling couple of weeks, Kanye West returned to Drink Champs for Round Three with hosts N.O.R.E. and DJ EFN. While the 45-minute interview hasn’t been posted to YouTube, it can be viewed on the Revolt TV website.

After a brief introduction, West immediately went into a diatribe about “the Jewish people,” arguing that he’s not an anti-Semite because he’s also a Jew “as the blood of Christ.” However, he then went on a rant about how the Jewish people control all facets of media and entertainment, even blaming “Jewish Zionists” for recent news stories about how his ex-wife Kim Kardashian and her ex-boyfriend Pete Davidson (who Kanye called “a heroin addict”) have sex in front of a fireplace.

West claimed that he had four concerts planned for Los Angeles So-Fi Stadium, but the bookings were canceled by the stadium owners following his Death Con 3 tweet.

He then wondered if N.O.R.E. would even run the Drink Champs episode, as West’s appearance on The Shop was withheld from broadcast over what statements he said on that show. “They blocked me out. The Jewish media blocked me out,” West said. “I’m lit. J.P. Morgan, I put a $140 million in J.P. Morgan, and they treated me like shit. So if J.P. Morgan Chase is treating me like that, how they treating the rest of y’all?”

After calling out the Kardashians, Puff Daddy and Meek Mill, West likened himself to Michael — Jackson, Jordan, Corleone “every Michael you can think of,” he said — and, as the reported richest black man in American history, West said, “I want y’all to run up on me, I want y’all to come kill me, I want you to smack me, I want you to do all this shit you rap about… Otherwise shut the fuck up, unless you was there when the Kardashians kidnapped my kids.”

In his previous appearance, he talked his longstanding rivalry with Drake, comparing it to being competitive in sports. This time he didn’t allude to there being a competition and he paid accolades. “Drake is the greatest rapper ever, and I don’t apologize about it,” he said, though they joked about West going at Drake in the past.

While the episode is being touted as “Drink Champs 3” with West, the rapper technically only appeared on the show once before, which was presented as a two-part interview.

In the first part that aired in November, he addressed the 2009 controversy from the VMAs with Taylor Swift, his breakup with Kim Kardashian, Drake beef, and more. In Part Two that aired shortly after, he discussed Gangster Disciple founder Larry Hoover, who is serving a life sentence in federal prison, mental health, and his Yeezy brand.

His appearance on Drink Champs arrives at a time when West has been under deep scrutiny for his anti-Semitic posts, which capped off a week earlier this month where he participated in a confounding two-part interview with Tucker Carlson on Fox News and earned condemnation for showcasing “White Lives Matter” T-shirts during a fashion show in Paris. By week’s end, he was restricted from posting on Twitter and Instagram.

It didn’t get any better this week, when leaked outtakes from his Carlson interview Vice published on Tuesday revealed that Carlson’s production team cut out various antisemitic comments from the aired version of the interview. His comments have received accolades from white supremacists. Oh, and he spent some time with alt-right darling Candace Owens, when he supported her at her documentary premiere, The Greatest Lie Ever Sold: George Floyd and the Rise of BLM.