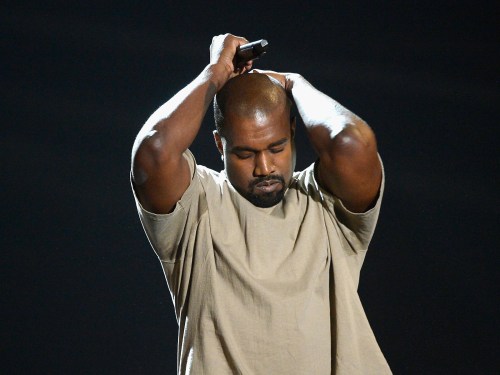 Following Kanye West’s inflammatory White Lives Matter shirts at his YZY Paris fashion show earlier this month, it was unclear where the graphic T-shirts would end up. But in a video posted by Ian Connor — a West associate and popular stylist who was accused of sexual assault by at least half-a-dozen women — it appears West’s team handed out the shirts for free in Los Angeles’ Skid Row neighborhood Sunday night.

“Courtesy of Kanye West,” a voice says in the quick video, with the camera panning around to show a busy street and a sprinter van loaded up with boxes. A man wearing a Homeboy Industries shirt — a non-profit devoted to the rehabilitation of former L.A. gang members — heads towards the car as the man filming encourages him to “hang it up” at their food stand.

Connor also posted an image of a woman posing with the oversized T-shirt, captioning the post “Load 1 – Skid Röw.” (A source close to the drops claimed to Rolling Stone that there are plans for a second round of drops.)

It appears that West plans to offload the shirts for free after claiming that American Apparel founder Dov Charney, who now runs Los Angeles Apparel, had refused to release the shirts his company manufactured after West declared he was about to go “death con 3” on “Jewish people.” (A source close to Charney declined to comment on the shirts or West’s claims.)

Connor has been frequently posting about his recent collaborations with West, such as the “Tremendez” T-shirt West wore to film RevoltTV’s recent Drink Champs episode, where the rapper falsely proclaimed that George Floyd’s death was caused by fentanyl, made more antisemitic comments, and shit-talked Kim Kardashian’s ex-boyfriend Pete Davidson.

The shirt West wore in the since-removed video is a depiction of Tremaine Emory, the Supreme creative director and founder of streetwear label Denim Tears. West has been singling out Emory after he came to the defense of Vogue stylist and editor Gabriella Karefa-Johnson who had criticized West’s White Lives Matter shirts, and blasted West for accusing LVMH CEO Bernard Arnault of “killing” their close friend designer Virgil Abloh. (Abloh died from cancer last November.)

Connor also took credit for being the “creative director” of another shirt that was a riff of Muhammad Ali duking it out with Superman, but with West as the legendary boxer and Emory as the superhero.

“Love love this,” West reportedly texted Connor, according to a screenshot he posted, and days later Drink Champs host N.O.R.E. was later seen wearing the shirt. Over the weekend, West was spotted wearing another shirt that depicted Emory’s mouth being covered by a white hand wearing an American stars and stripes shirt.

Connor’s re-emergence in West’s inner circle is surprising, considering the stylist hasn’t been publicly linked to West since around 2016. Prior to that, Connor was labeled as West’s fashion muse, modeling in his Yeezy shows and serving as a consultant for the brand.

The then-23-year-old was hip-hop’s go-to fashion stylist and consultant, frequently working with A$AP Rocky and the A$AP Mob at the peak of their influence, and was close with Abloh, whose Off-White label was developing a cult following. Connor has posed for Vogue Italia, was frequently featured in Hypebeast, and launched the successful Sickö clothing brand, which has been worn by Skepta, Zack Bia, and others.

But in June 2016, rapper Theophilus London claimed West had fired Connor. The distancing from Connor also coincided with at least a half-a-dozen women — including Chicago artist Jean Deaux— coming forward to accuse Connor of sexual assault. (In July 2016, Connor denied the allegations, telling Broadly: “I do not condone rape and I have never raped anyone. Why force somebody to do something they don’t want to do? Any forced situation is not cool.” Connor did not immediately reply to Rolling Stone’s request for comment.)

Amber Rose, who dated West from 2008 to 2010, claimed to The Daily Beast in 2018 that 21 women had privately reached out to her about Connor, saying she was disappointed that more men in the industry hadn’t addressed the accusations. “I don’t know why [Connor’s] still walking around,” she said. “I’m disgusted with him, because I truly believe that he did everything that they said he did. It’s really, really sad.”