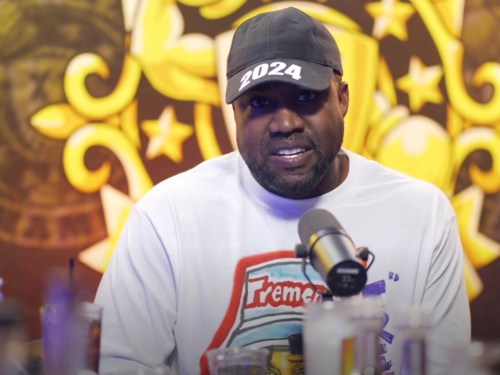 In addition to railing against “the Jewish media,” Kanye West spent some time on Drink Champs regurgitating what he gleaned from the George Floyd “documentary” made by alt-right firebrand Candace Owens, his partner-in-White Lives Matter. Most notably, West said that fentanyl, and not being suffocated by a police officer’s knee, caused Floyd’s death.

“I watched the George Floyd documentary that Candace Owens put out. One of the things that his two roommates said was they want a tall guy like me, and the day that he died, he said a prayer for eight minutes,” West told Drink Champs, referring to the . “They hit him with the fentanyl. If you look, the guy’s knee wasn’t even on his neck like that.”

(During the trial against Minnesota police officer Derek Chauvin, medical experts testified that even though Floyd had traces of fentanyl in his system, Floyd died from a lack of oxygen caused by the knee on his neck, which a coroners’ report affirmed in deeming Floyd’s death a homicide.)

West then compared Floyd, whose May 200 death by police helped sparked the Black Lives Matter movement, to the late designer Virgil Abloh. “This white company Louis Vuitton is now making statues of him as a martyr, and we don’t know why exactly [he died], they said it was cancer,” West said.

Immediately after his Floyd comments, West asked N.O.R.E., “Can you even run this interview?,” noting how his appearance on HBO’s The Shop was axed over “hate speech and extremely dangerous stereotypes.” After being uploaded to the Revolt TV website Saturday night, West’s Drink Champs interview was pulled late Sunday morning.

Even though the episode was taken down, N.O.R.E.’s response to West regarding Black Lives Matter — which wasn’t part of the original 45-minute episode — was posted on the Drink Champs YouTube as bonus footage from the interview:

West and Owens — who the rapper name-checked throughout Drink Champs — have been tapped in with one another for years. Back in 2018, the rapper tweeted, “I love the way Candace Owens thinks.” To this she responded with a proposition that no one asked for or needed: “I need you to help wake up the Black community.” Lately, their directionless mission to shake the black community out of an imaginary stupor culminated in the debut of West’s longsleeved “White Lives Matter” shirt. West and Owens sported the matching merchandise in Paris last week during a showcase of his new Yeezy line at a YZY SZN 9.