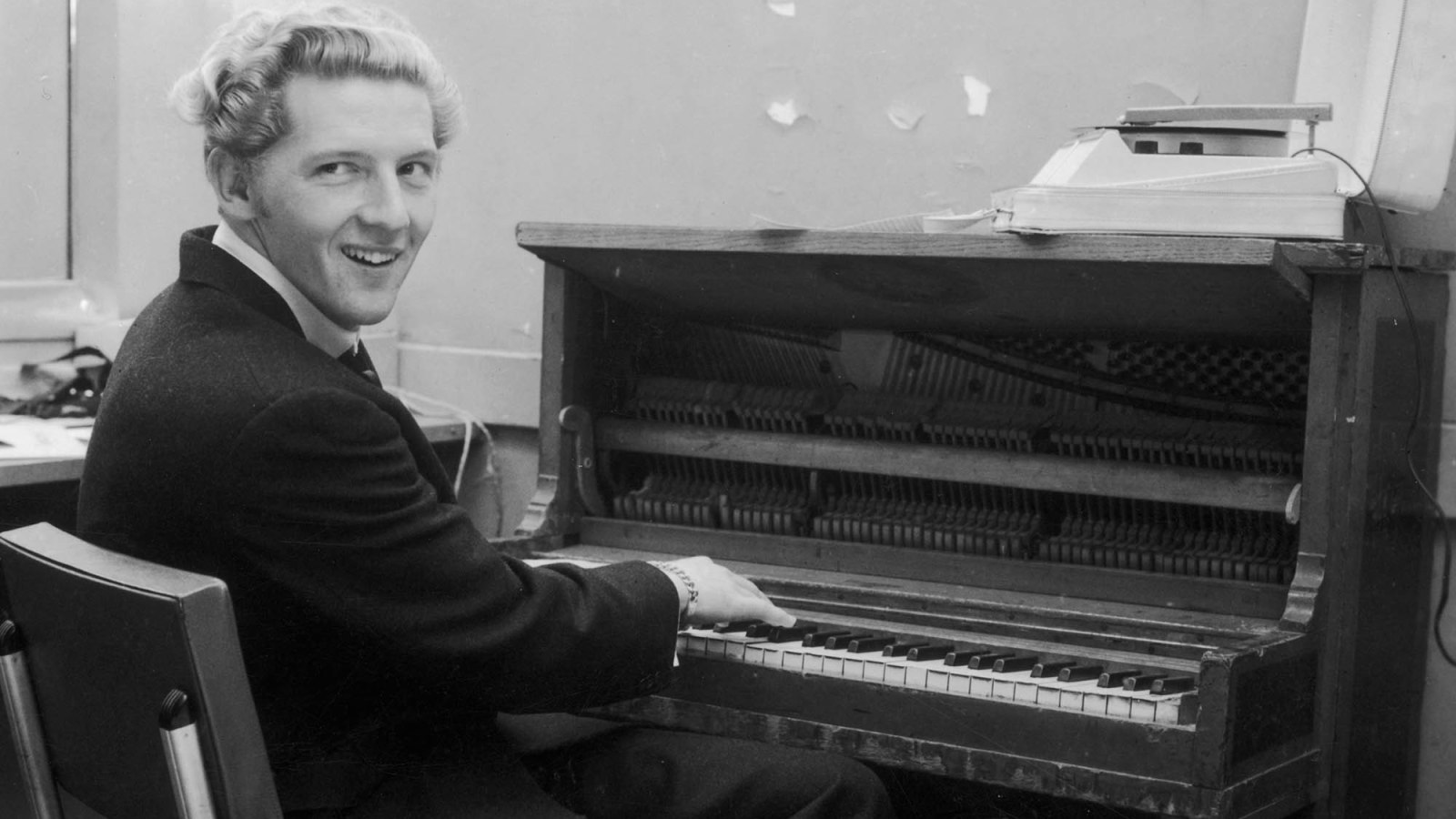 Jerry Lee Lewis, whose hammering boogie-woogie piano, unleashed-tomcat voice, and unapologetic bad-boy persona made him an architect of rock & roll and an early rival of Elvis Presley, has died. Lewis’ publicist confirmed his death to Rolling Stone, but a cause of death was not immediately available; he was 87.

Lewis passed away at his home in Desoto County, Mississippi, with his seventh wife, Judith Coghlan, by his side.

Lewis’ two 1957 singles, “Whole Lotta Shakin’ Goin’ On” and “Great Balls of Fire,” were some of rock’s earliest and most primal hits: howling, whooping, libidinous performances that announced, as defiantly as any other records of the period, that a new style of music had arrived and would take zero prisoners. “I had created rock & roll before they ever thought about having rock & roll,” Lewis told Rolling Stone in 2014. “When Elvis come out, he was rockabilly. When I come out with ‘Whole Lotta Shakin’ Goin’ On,’ that was rock & roll. That’s when the name ‘rock & roll’ was put in front.”

Offstage, Lewis personified the perceived dangers of rock music too. “I’m the toughest son of a bitch that ever shat out of a meat ass,” he bragged to Rolling Stone in 1979. Throughout much of his life, he fought addictions to alcohol and pills, once accidentally shot a member of his band, and famously burned a piano onstage when he was asked to play before headliner Chuck Berry. “Burned it to the ground,” Lewis said in 1979. “I was supposed to be the star of the show.”

But it was a notorious scandal that killed his career, at least momentarily — the revelation that Lewis, then 22, had married his 13-year-old cousin Myra Gale Brown. The pair would be married from 1957 to 1970, and the illicit marriage (one of seven for Lewis) would cast a lifelong pall over the musician’s legacy.

Born Sept. 29, 1935, in Ferriday, Louisiana, Lewis grew up poor (his father Elmo worked as a carpenter, when he worked at all). Around the house, young Jerry Lee was exposed to cowboy music, blues 78s, and swing records, and he sneaked into local clubs to hear the likes of Ray Charles and B.B. King. Although he was proficient at drums, Lewis began playing piano at age eight — Lewis’ father mortgaged their farm to buy him one, and an older cousin taught him the boogie-woogie style soon after — and he gave his first public performance at 15 in the parking lot of a car dealership. He once said that the first song he learned to play was “Silent Night” — but, as he told Rolling Stone, “I played it rock & roll style.”

After high school (where he landed his lifelong nickname, the Killer), Lewis attended Bible school in Waxahachie, Texas. But in an early sign of his struggles between the secular and the sacred, Lewis performed the gospel song “My God Is Real” at a school function — also in a “rock & roll style.” For his boldness, he was expelled. By then, Lewis had already been married twice: first, at 15, to a woman two years older, then to another woman he impregnated during his first marriage. After school, he auditioned unsuccessfully for record companies in Nashville, and returned home to work as a sewing-machine salesman.

Lewis’ life, though, was completely altered when he and his father drove to Sun Records in Memphis (to afford the trip, the elder Lewis sold 33-dozen eggs from his farm). Thanks to Presley, Sun was the place to be for many aspiring musicians. Label head Sam Phillips wasn’t in that day, but chief engineer Jack Clement was, and after hearing Lewis sing and play country songs, he advised Lewis to focus on rock & roll instead. On a return trip to Sun, Lewis cut a few more rocked-out songs — including the country hit “Crazy Arms” — which Phillips then heard. “Where the hell did this man come from?” Phillips recalled to Rolling Stone in 1979. In Lewis, Phillips saw a young, raw talent equal to that of his biggest star, Presley.

At the end of one of his Sun sessions, Lewis offhandedly suggested he cut a song he’d been playing on and off. With no rehearsal with the band, Lewis bashed out “Whole Lotta Shakin’ Goin’ On.” Released in early 1957, the song exploded, and with good reason: From its barreling piano to Lewis’ super-suggestive delivery, the song made Presley sound tame. Both that hit and its follow-up, Otis Blackwell’s “Great Balls of Fire,” weren’t just dynamic, but also historic: They landed in the Top Five of the country, pop, and R&B charts simultaneously.

Although Lewis scored another Top 10 hit, “Breathless,” the following year, his ascent was over almost as soon as it began. While touring England in 1958, reporters learned that Lewis had married his third-cousin, Myra Gale Brown, the daughter of his bass player. Lewis at first said she was 15 — she was actually two years younger. Lewis was unrepentant, but the scandal derailed his career. Back home, his gigs dried up, the hits stopped, and by 1963, he was gone from Sun.

Lewis kept working and recording (his Live at the Star-Club, Hamburg album, taped in 1964, is still considered one of rock’s greatest concert records). He dug into blues, gospel, and country, and his lifestyle grew even wilder as his drugging and drinking escalated during this period. The rock world may have been done with him, but Nashville wasn’t. Some of Lewis’ Fifties hits made the country charts, and in 1968 he basically migrated to the genre. “Another Place Another Time” kick-started a string of country hits, and he was reborn as a repentant honky-tonk singer with his career restored. (He returned to the pop charts in 1972 with a cover of Kris Kristofferson’s “Me and Bobby McGee.”) As proof of how much he was still revered, Lewis’ 1972 album The Session, cut in London, featured cameos from Peter Frampton and Alvin Lee, among others.

Lewis rarely slowed down into the Eighties: He cut a few rock-friendly albums for Elektra and continued touring and recording, burnishing his legend. He was inducted into the Rock & Roll Hall of Fame in 1986. In 1989, his life was immortalized onscreen in Great Balls of Fire, featuring Dennis Quaid in a somewhat-cartoonish version of Lewis.

But Lewis’ personal life could still be chaotic, often tragic, and shrouded in mystery. In 1962, his three-year-old son, Steve Allen (named after the TV talk-show host who helped make Lewis a star early in his career), drowned; another son, Jerry Lee Lewis Jr., was killed in a car accident in 1973. Lewis’ estranged fourth wife, Jaren Gunn Lewis, was found drowned in a pool just before she and Lewis were divorced. In 1983, his fifth wife, Shawn Michelle Lewis, was found dead in the bedroom of their house in Nesbit, Mississippi, less than three months after their marriage. Although her death was attributed to pulmonary edema, a buildup of fluid in the lungs (implying a drug overdose), the death was mired in controversy. As Rolling Stone later reported, blood was found on Lewis’ robe and slippers, but the blood was never tested and Lewis was never charged. He denied any involvement in her death.

Lewis also spent time in the Betty Ford Clinic for addiction to painkillers, and had numerous battles with the IRS. “I get crazy sometimes,” he told Rolling Stone in 1979. “But if everything they say I’ve done is true, I’d have been put in the penitentiary long ago.”

Even with all his industry respect, Lewis remained one of rock & roll’s most unpredictable and volatile artists. During the sessions for Mean Old Man, he told Rolling Stone, “I just tell the band to grab hold and just go. I kick a song off and get it going and see if they can keep up. Maybe they can and maybe they can’t, but if they can’t, they might get a concussion.”

In 1981, a torn stomach lining almost killed Lewis, and health issues continued to dog him. In the early 2010s, he was hospitalized on several occasions for breathing problems, back pains, and pneumonia. In recent years, Lewis — still living in Nesbit, by then with his seventh wife, Coghlan, whom he married in March 2012 — had corralled some of his manic ways, thanks to his daughter and manager, Phoebe Lewis.

In February 2019, Lewis suffered a stroke. Although initially described as “minor,” it was anything but; he had to relearn how to use his right hand and how to walk again. “I’ve never experienced anything like it,” he told Rolling Stone months later. “It was very challenging, and it was a very emotional experience. I didn’t know what was going on. I woke up in the hospital. I just did some heavy praying, and tried to get back on the right track.” Less than a year later, he’d recovered enough, at 84, to make a new, gospel-rooted album in Nashville with producer T Bone Burnett. In another sign of his incredible resilience, Lewis was able to play piano on the album (which remained unreleased) after all.

Lewis was finally inducted into the Country Music Hall of Fame in October of this year, but poor health confined him to his bed and he was unable to accept the award in person. But no matter the genre, Lewis remained unrepentantly himself. “I was raised a good Christian,” he told Rolling Stone in 1979. “But I couldn’t make it. … Too weak, I guess. I can’t picture Jesus Christ doin’ a whole lotta shakin’.”