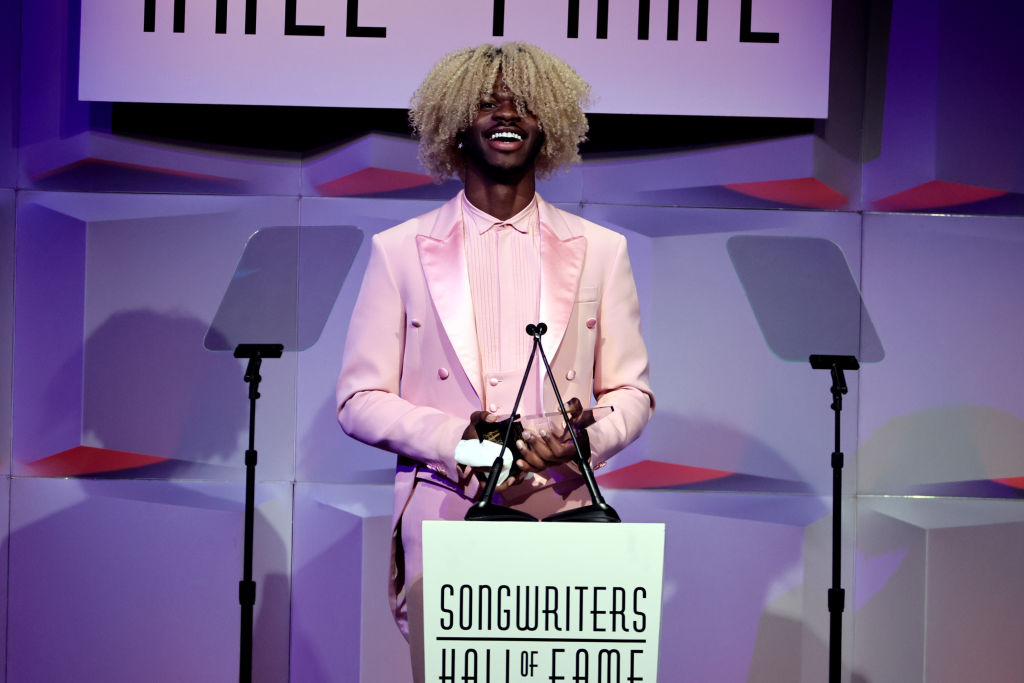 Late Thursday evening, Lil Nas X took the stage at the Marquis Marriott Hotel in New York City as the youngest honoree of the night as he accepted the Hal David Starlight Award at the Songwriters Hall of Fame. The honor, presented to young songwriters impacting the music industry through original songs, was presented to the 23-year-old artist two-and-a-half hours into the 51st annual induction ceremony. The night may have been dragging on with back-to-back 10-plus minute speeches punctuated with equally long performances, but Lil Nas X wouldn’t keep the audience for long. In fact, he barely needed 45 seconds.

“This award means a lot to me for the simple fact that, somehow, I keep just doing things and it keeps working out,” Lil Nas X shared through a shield of bleached curls, courtesy of the “quarter-life crisis” he mentioned at the top of his brief speech. “I don’t know why the universe is letting me have these moments, but thank the universe.” Apart from also thanking his team, it was all he really had to say. Acutely aware of the veteran company he found himself in, he put his brief accolade in conversation with past acceptance speeches: “I don’t have any kids in the audience, or a wife – or in my case, a husband – to say thank you to, but thank you to my imaginary husband and kids.”

Lil Nas X had been preceded in the night by Johnny Mercer Award-winner Paul Williams, Abe Olman Publisher Award-winner Jody Gerson, and Songwriters Hall of Fame inductees Rick Nowels, Annie Lennox and Dave Stewart of Eurythmics, Steve Miller, and William “Mickey” Stevenson. Rapper Q-Tip was tapped to present the award, crediting the artist born Montero Lamar Hill with “literally rewriting the book on modern music” as he joined Drake as the only two rappers in history to receive the Hal David Starlight Award. His name adds to a list of past recipients that, among others, includes Alicia Keys, Taylor Swift, and Halsey.

The achievement highlights the growth between the once-suspected one-hit-wonder who struck gold with “Old Town Road” and the trailblazer who – on records like “Montero (Call Me By Your Name)” and “Industry Baby” – unabashedly embraced his positioning at intersections of both genre and identity as a black, queer pop-rap star. “That’s the mark of fearless and relentless creativity and unwavering dedication to self-expression and representation for all,” Q-Tip added. “In just a few short years, Lil Nas X has become one of the most important forces in this generation.”

Though his introduction was more celebratory of his successes over the past three years than LNX’s own acceptance speech, the rapper concluded with a look towards the future. “I hope to be back here,” he said before correcting himself. “I will – in 40 or 30 years, maybe.” It’s all about manifestation – or delusion, whichever works. While accepting an award at the iHeartRadio Music Awards earlier this year, the rapper insisted: “It’s okay to be delusional when you’re chasing your dreams.”

In past years, the Hal David Starlight Award recipients have performed at the ceremony. But following his acceptance, Lil Nas X returned to the audience. Without decades of hits to reflect on, it was a night of appreciation for the rapper who leapt out of his seat during St. Vincent’s rendition of Eurythmics’ “Sweet Dreams (Are Made of This)” and the Isley Brothers’ high-energy medley following their own induction. But the most poignant takeaways arrived following Jimmy Jam and Terry Lewis’ induction of Pharrell and Chad Hugo as the Neptunes.

In a speech that spanned from music publishing battles to his decades-long friendship and creative partnership with Hugo, Pharrell lingered on the cosmic experience of creating music – something he calls the “sparkle,” a sense of direction that propels an artist forward – and what comes after. “I know that there are a lot of accomplished writers in here tonight, but I’d like to speak for a moment to all the future writers of songs and the musicians of songs,” he began. “You are the writer of history, so you have to control your narrative. Your creations will be recorded and studied for years to come – so take control of your narrative.”

Jon Batiste and the accompanying band celebrated the Neptunes with a medley performance that featured some of the biggest hits in their expansive catalog, from Snoop Dogg’s “Beautiful” to Kelis’ “Milkshake.” Paired with Usher’s surprise performance of his Neptunes-crafted 2001 hit “U Don’t Have To Call,” the tribute reflected the narrative the production and songwriting duo have established over the course of three decades. It’s one of hit-making, lighting-in-a-bottle moments captured over and over alongside genius-level skill.

“To get to this moment, it always starts with uncertainty and then that sparkle and a whole lot of gifts and blessings,” Pharrell added. “You gotta remember it was given to you. First, it was the opportunity given to you by the universe. Second, it’s the inspiration provided by the world around you.”

As the night’s final inductee, taking the stage at midnight, Mariah Carey made a point of hammering in the core of her own narrative: as much as she is a diva, she’s a songwriter. She played up the dramatics, checking that her lighting was just right and slipping her shades on in the already darkened ballroom. But she also spoke at length about the way melodies and poetry have flown through her since she was a little girl. Carey recalled “walking by myself and coming up with melodies and writing words in a book,” then pulled out a few sheets of handwritten notes to show that not much has changed. “These are legit my notes,” she said. “But I just wanted to say that I constantly have to remind people I’m a songwriter.”

With her induction, Carey became the 33rd woman to join the Songwriters Hall of Fame. In his introduction, Questlove highlighted that the recognition was long overdue, praising the depth and range of the singer’s catalog. “That’s the power of success, especially at Mariah Carey’s level, because you can be overlooked in certain respects and people will often forget that you are an artist,” he explained. “People forget and suddenly you just become the product.” It’s another instance in which gaining control of your own narrative as an artist has the potential to influence the shaping of your legacy.

When Lil Nas X’s manifestations lead him back to the Songwriters Hall of Fame stage in three or four decades, his presence will represent far more than a pop star with a few hit songs – not unlike the Isley Brothers, Carey, or Pharrell. It will stand for the continued honoring and celebration of black musicians while they’re still trailblazing, not just after the fire has gone out.