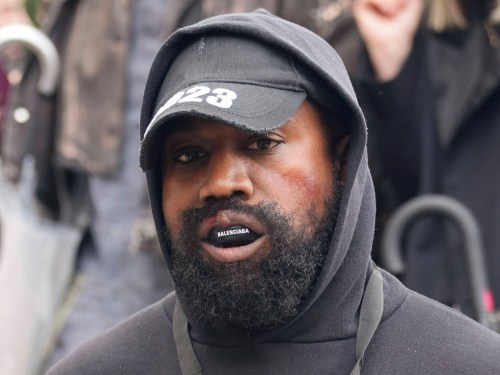 The family of George Floyd is planning to sue Kanye West and his associates for $250 million in damages over the rapper’s false statements about Floyd’s death.

Roxie Washington, who is the mother of Floyd’s daughter, plans to file the suit on behalf of the child, who is a minor. The family is accusing West, his business partners, and associates of harassment, misappropriation, defamation, and infliction of emotional distress.

According to a statement, Floyd’s family issued a cease-and-desist letter to West over his comments on Drink Champs. During the appearance, the rapper falsely claimed that Floyd wasn’t murdered by former police officer Derek Chauvin but that he died of fentanyl. (It’s currently unclear if those aforementioned “associates” include Candace Owens, as West plucked the debunked claim about Floyd’s death from her new Daily Wire-produced “documentary” The Greatest Lie Ever Sold).

“If you look, the guy’s knee wasn’t even on his neck like that,” West said of Chauvin, who was convicted of murdering Floyd by holding his knee on Floyd’s neck and back, depriving him of oxygen, and causing brain injury and cardiac arrest.

Lawyers for Floyd’s family did not immediately return Rolling Stone‘s request for comment, nor did a rep for West.

The statement announcing the plans to sue accuses West of knowingly making “blatantly false statements” about Floyd’s death to “promote his brand and increase marketing value and revenue for himself, his business partners, and associates.” While there are no legal grounds to pursue a defamation claim on behalf of a deceased person, the lawyers Floyd’s family have retained for this suit appear ready to argue that West’s false statements about Floyd have had an equally detrimental effect on his family and daughter.

“The interests of the child are priority,” said Nuru Witherspoon of the Witherspoon Law Group. “George Floyd’s daughter is being retraumatized by Kanye West’s comments and he’s creating an unsafe and unhealthy environment for her.”

Another attorney, Pat D. Dixon, III, of Dixon & Dixon, added, “Kanye’s comments are repugnant to discount George Floyd’s life and to profit from his inhumane death. We will hold Mr. West accountable for his flagrant remarks against Mr. Floyd’s legacy.”

Lee Merritt — another lawyer who has worked with Floyd’s family but is not involved in this planned lawsuit — told Rolling Stone on Monday that the nearly $1 billion judgment that Sandy Hook parents won against Alex Jones for spreading conspiracy theories about the 2012 shooting could offer a roadmap for legal recourse.

West’s false statements about Floyd, as well as his additional antisemitic comments on Drink Champs, immediately caused an uproar after the episode dropped over the weekend. In the aftermath, one of the show’s hosts, N.O.R.E., issued a handful of apologies, and the episode was eventually pulled from podcasting platforms and YouTube.

While speaking with Rolling Stone, Merritt said Floyd’s family felt “betrayed” by West’s comments, especially considering the rapper previously said he made significant donations to Floyd’s family and established a college fund for his daughter.

“For someone who has held himself out as an ally and supporter for the family, to now see him reversing course and ratifying [Owens’] comments and her extreme views is really disappointing,” Merritt said. “That documentary was offered by a person who we know is on the far right with an agenda. Now you essentially see Kanye West advocating for Derek Chauvin and other conspiracists.”