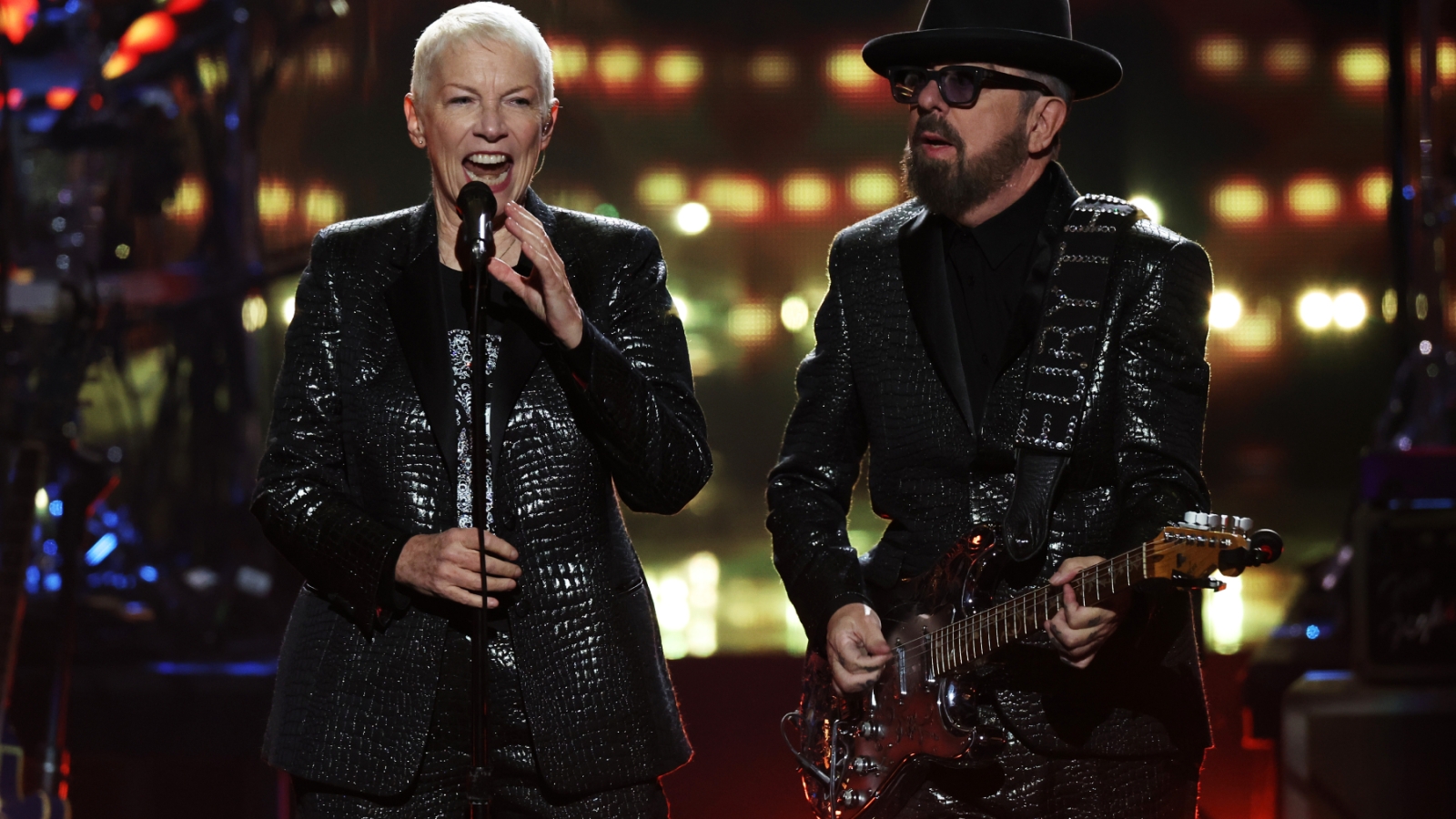 Annie Lennox and Dave Stewart made a rare return to the stage as Eurythmics Saturday night as they celebrated their induction into the Rock and Roll Hall of Fame.

Coming out in matching black gator-skin-looking dress pants and sport coats, Lennox and Stewart took the stage starting with 1985’s “Would I Lie to You?”

Lennox led a stomping performance of 1986’s “Missionary Man,” keeping most of Microsoft Theater on their feet. The crowd erupted when they finally went into their 1983 signature song “Sweet Dreams (Are Made of This),” with Lennox holding a bedazzled cane while performing.

Eurythmics were first active between 1980 and 1990, breaking through with “Sweet Dreams (Are Made of This)” and scoring subsequent hits with songs like “There Must Be an Angel (Playing With My Heart),” “Thorn in My Side,” and “Would I Lie to You?” The duo disbanded in 1990, with Lennox embarking on a successful solo career, while Stewart became an in-demand producer.

In 1999, Stewart and Lennox got the band back together for a new album, Peace, though the record didn’t exactly mark the start of a second phase. Of the nine acts inducted into the Rock Hall this year, Eurythmics are the only one not active in one way or another. They haven’t released another album since Peace, and while Stewart and Lennox have remained close, they’ve only taken the stage together on special occasions, including a 2019 benefit concert.

Eurythmics were first eligible for the Rock and Roll Hall of Fame in 2007, and were inducted the third time they were nominated. “It’s always nice to be recognized for all the hard work and the amount of songs that we put out and recorded and the amount of places we played,” Stewart told Rolling Stone after the band’s induction was announced earlier this year. “You tend to sort of forget as your life goes on, but then when something like this comes up you’re like, ‘Wow, I nearly killed myself.’”

Lennox added, “We were talking and we both feel like some kind of circle has been completed. It’s a strange thing. I hadn’t expected to feel that way. But things made some sense in a weird kind of way. A musician is an aspirational creature right from the start. You have the feeling you want to express something. Sometimes you’re clear about it. Sometimes you’re not. And then off you go and something maybe happens for you, or maybe it doesn’t. If it does, it’s never quite what you expect it to be. And so our journey has been really one of decades and decades. Things have happened personally, musically, and in the world throughout these decades that you could never have anticipated.”