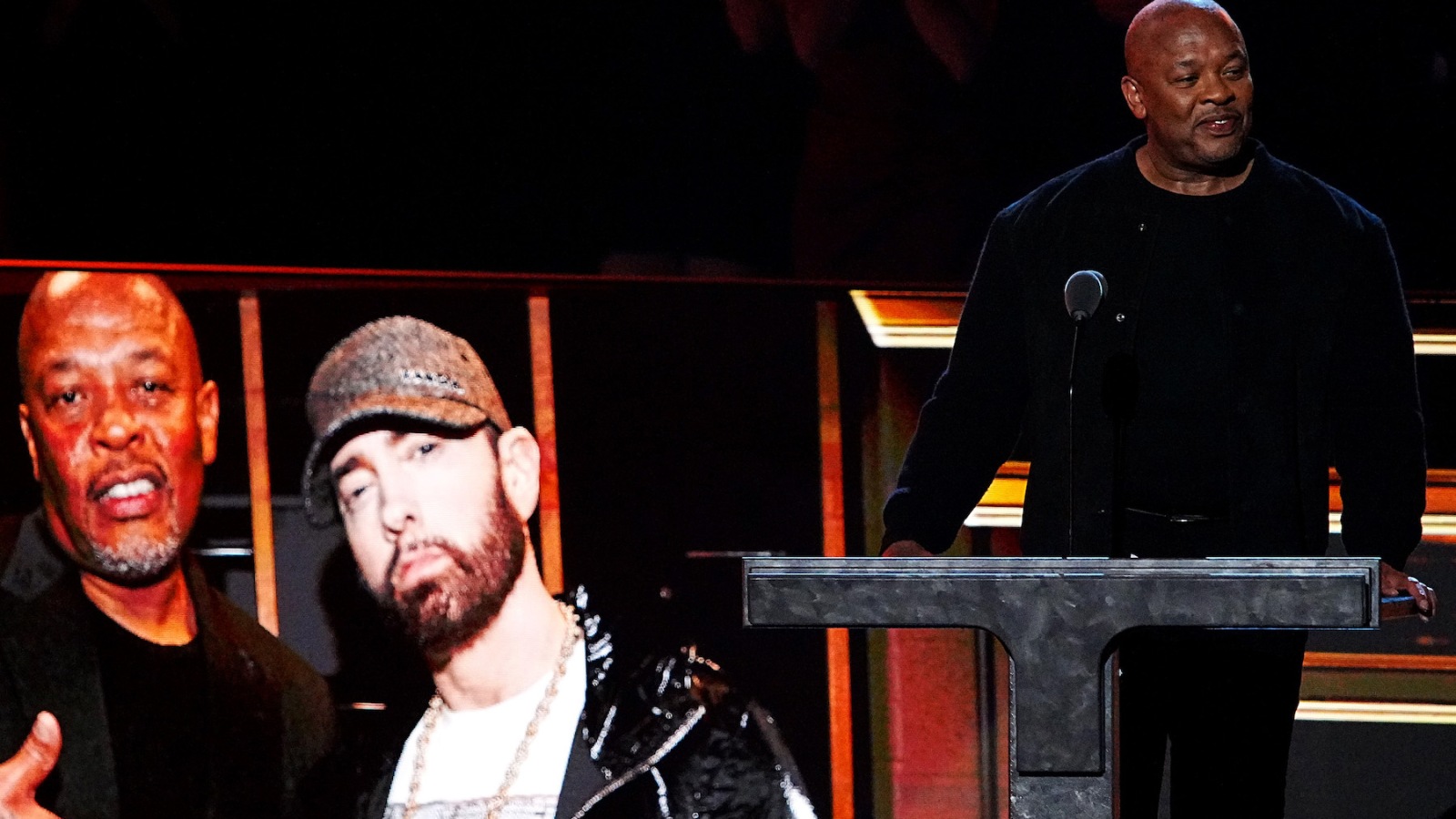 When Eminem shocked the hip-hop world with his wry, witty rhymes about drugs and murder, it felt refreshing. Other than the Beastie Boys, most white rappers up to that point came off as kind of corny (see: Vanilla Ice, Snow). But thanks to a cosign and brilliant production from Dr. Dre, who even appeared in Em’s “My Name Is Video,” the rapper quickly became a phenomenon. The Slim Shady LP, his 1999 major-label debut (on Dre’s Aftermath imprint), improbably charged up to Number Two on the Billboard 200 and has since been certified five-times platinum. It was the makings of a superstar.

In a heartfelt and often funny speech inducting Eminem into the Rock & Roll Hall of Fame on Saturday night, Dre reflected on how and why he took a risk on a blue-eyed white rapper from Detroit. The pair have remained close friends — Eminem still releases his albums via Aftermath — and with more than 20 years of hindsight, Dre explained how he’s still making sense of the Slim Shady phenomenon. Here is what he had to say.

Make some noise, Los Angeles. When I started working on this speech, I asked Eminem if there was anything specific he’d like me to say to everybody, something that he would like them to know. He said, “OK, number one, I want you to tell everyone I have a huge penis.” But when he started counting, I was wondering why he decided to use this finger. [Holds up pinky.]

OK, let me get serious.

Over 20 years ago, Jimmy Iovine, who is also one of tonight’s inductees and one of my best friends, played a demo tape for me from a guy who called himself Eminem. The first thing I said when I heard it was, “What the fuck did he just say?” I loved it so much that I couldn’t stop listening to it.

A few days later, Jimmy called me up, and he said [raises voice pitch], “Hey, Dre. You know, he’s a white guy, right?” Completely fucking me up. The last thing I was thinking about when I was listening to the music was that he was a white guy. It never even crossed my mind. But looking back, I don’t know why it didn’t cross my mind. He certainly didn’t sound like a Black rapper, especially because of what he was saying. I guess it was my ignorance at the time, thinking that, “OK, if you’re a really good rapper, you must be Black.”

Not too long after that, we met for the first time. We hit it off, and the next thing you know, we’re at my house working. The first time I put on a beat, he got on the mic and said, “Hi, my name is Slim Shady.” That was it, and that was the beginning of what became an amazing creative collaboration. Then came the backlash. “Look at him, Dre. This guy has blue eyes. We can’t sign him.” There was a massive amount of resistance from my whole team and people around me that didn’t want me to work with him simply because he was white. Didn’t want me to sign him or anything like that.

While everyone else around me had their doubts, I knew that his gifts were undeniable. His raw, dark, humorous lyrics, coupled with an impeccable cadence, stood out from everything I had ever heard before. And he was humble. Both of us were. We were two artists in do-or-die situations. He was desperate to find a way to feed his family, and I was searching for something that I could sink my teeth into creatively. Each of us were exactly what the other one needed. And I was willing to bet my entire career on that. Facts.

My rebuttal to those naysayers was something like this: “He’s gonna be the bestselling artist on our label.” Little did I know he was going to be one of the bestselling artists of all time. Facts. From the moment he introduced himself to the world with The Slim Shady LP, he skyrocketed to the top of the charts and stayed there for 100 weeks, earning himself a Grammy for Best Rap Album, Best Rap Solo Performance. And can you believe after promoting violence to little children, “killing” his daughter’s mother, this guy still had more shit to get off his chest? [Laughs].

And then his sophomore album comes out, right? The Marshall Mathers LP drops. On that album alone, his alter ego, Slim Shady, tied me up in the basement, he had sex with his mother, killed his daughter’s mother again [laughs], while proceeding to offend about every special interest group we had. It clearly struck a chord and became one of the fastest-selling albums in United States history.

Eminem would go on to overdose, relapse, recover — and not only on his albums, in real life. Let me tell you something, this guy goes through a lot of shit just to get a concept for a song. But here’s Eminem’s genius: With his incredible wit and wild imagination, he was able to hold a mirror up to white America while also expressing pain through poverty and dysfunctional families devoid of hope, Eminem brought hip-hop to middle America and offered kids who looked like him a way to connect to it.

Hip-hop wasn’t just for Black kids in desperate, inner-city circumstances anymore. People of every stripe and color had the art form speak to their struggles also. Eminem wasn’t just the underdog who broke through the glass ceiling of hip-hop, he shattered that shit. More than 220 million albums sold. Thirteen Number One albums, 10 of which all consecutively debuted at Number One, making him one of the first artists ever to achieve that shit. Winning awards, an Emmy, an Oscar, making him the bestselling artist of the 2000s — the bestselling hip-hop artist ever. Let me repeat that, the bestselling hip-hop artist ever.

The crazy part about it is he doesn’t really care about it. I think I care more about it than he does. What’s most important to him is he’s earned the respect of his peers as one of the best to ever do it, point blank. Turns out, this unassuming white guy with blue eyes from Detroit being repeatedly turned down and turning everything we thought we knew about hip-hop on its head by forcing us to confront our own biases, growing not only the genre but all of us right along with him. Point blank.