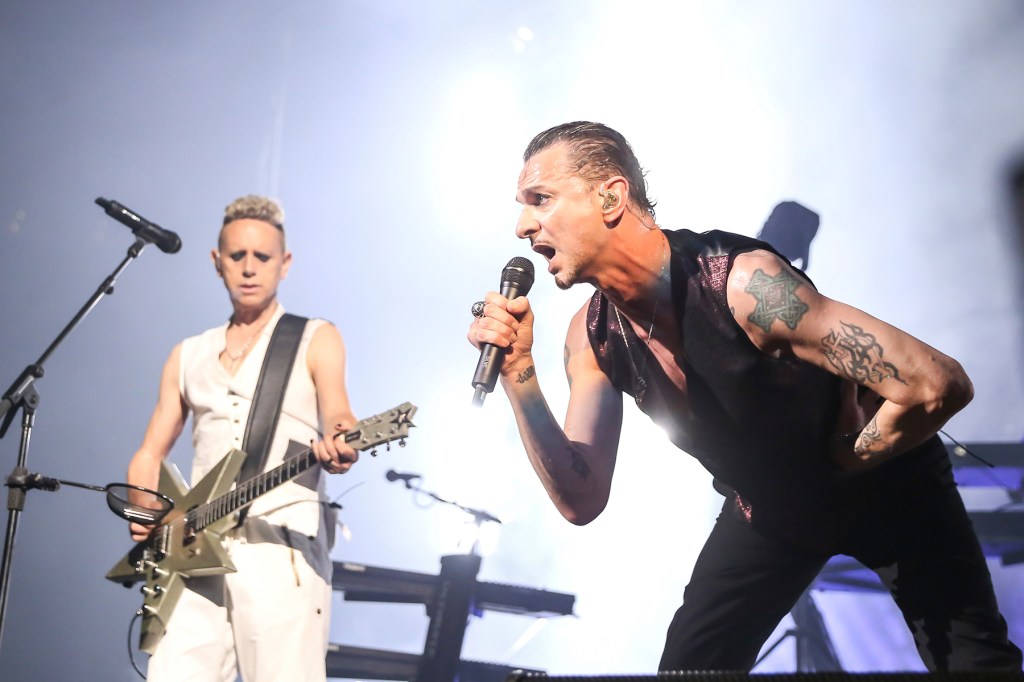 During the peak of the pandemic, Depeche Mode’s members found themselves simultaneously making sense of Covid’s widespread loss while trying to appreciate life in the moment. Those two themes kept popping up when frontman Dave Gahan and singer and multi-instrumentalist Martin Gore were writing lyrics for what would become their 15th album. They embraced this idea by calling the album Memento Mori.

“The direct translation [for ‘memento mori’] is, ‘Remember that you must die,’” Gahan says via phone from Berlin, a few days before the band’s press conference announcing Memento Mori. “A lot of the songs are going into that place of reminding ourselves that our time is fleeting, and you got to make the best of it — in a positive way.” Gore says he first heard the Latin phrase from a friend. “I just thought, ‘What a great album title for the songs that had been written already,’” he says.

It’s one of the few times the group settled on an album title while making a record and stuck with it all the way through. The album, which producers James Ford and Marta Salogni are finishing in London, is due out next spring while the Memento Mori tour will launch in North American arenas, beginning in Sacramento, on March 23.

Before they could get in the studio, though, the title took on far greater meaning for Gahan and Gore. On May 26, Andy “Fletch” Fletcher, who co-founded Depeche Mode and played synthesizers and bass in the group since 1980, died naturally of an aortic dissection. Did they second-guess the title after Fletch’s death? “I think it cemented it, if anything,” Gore says.

“Obviously, everybody will think that all of the songs were quickly written after Andy died,” Gore continues. “But everything was planned and ready to go. Unfortunately, Andy passed away when he was really looking forward to getting started with us. So I like the idea of ‘memento mori’ in a more positive way, in a ‘Live each day and make the most of your time here.’”

“This is the first time we’re doing something like this without Fletch,” Gahan says. “All the songs were already written before Fletch passed, but when something happens, an event like this in your life, songs change: They take on different forms and have different meanings when you sing them. I think when I was singing some of the vocals, I was reflecting on all kinds of things, but certainly Fletch came up in my mind quite a lot.”

Even now, the two musicians are still making sense of their bandmate’s absence. “You don’t always get to say goodbye,” Gahan says. “With this, it was just one of those things where all of a sudden, Martin and I are sitting in a pew in a church together, and Fletch is not here anymore, just like that.”

“It’s obviously really hard to lose your closest friend,” Gore says. “Andy was there with me from way before the band and I feel like he was the one in the trenches with me the whole way. So it’s very tough.”

But Gore feels like his bandmate would have wanted Depeche Mode to continue. “He was always seen as the glue of the band,” he says. “It would’ve been unthinkable for him to think that his death would’ve caused the end of the band.”

Now Gahan and Gore are feeling his loss in more profound ways. Fletch, who had a big, dry sense of humor, used to joke that while Gahan’s and Gore’s roles were well-defined — Gahan was obviously the singer while Gore wrote the majority of the songs — his job was to “bum around.” But the two musicians say he was much more important to Depeche Mode than he gave himself credit for.

“We’ve come to realize more after his death that he did play a huge role in the band,” Gore says. “Dave and I are not antisocial, but we’re not super-social people, whereas Andy was. If we ever had to do anything, [Fletch] would go in and start just chatting to everyone, and me and Dave could hide out in the corner somewhere. Even though we’ve been together for 40 years, me and Dave have been brought much closer together by Andy passing, because we had to. Whereas before, Andy was, like I say, the glue. He did bring us together; he was the interlinking part.”

Gahan and Gore didn’t see each other face to face to work on the album until July. The singer feels that if Fletch were working on the album, he’d have joked, “Can we just stop talking about death?” “I missed that in the studio,” the singer says, “and I know Martin did, too. We felt like he was still there with us.”

The group opened the Berlin event with a short montage, showing close-ups of music gear as echoey, undeniably Depeche Mode music plays in the background. The soundtrack had a throbbing, fuzzy synth bass line and operatic vocals. Eventually, the camera pulled out to show the musicians together in the studio. Eventually, Gahan’s voice enters and he sings, “We know we’ll be ghosts again.”

Neither Gahan nor Gore feel ready to name any of Memento Mori’s song titles — days before the Berlin event, they’re not even quite sure what the final titles are for the musical selections they’re playing — but they say the structure of the album as a whole came together naturally. “To me, it’s got a cinematic quality to it,” Gahan says. “It takes you on a bit of a trip, starting in a place where we’re like, ‘This is my world,’ and ending with, ‘How do I make the most of it?’” The music, Gahan says, sounds melancholy but it’s also braided with hope and joy. The record will likely feature 12 songs with a few saved over as extras for a deluxe edition.

In addition to finishing the record, the group is figuring out how to get back onstage without one of their founding members. “We’re not going to replace Fletch; there’s no reason to replace Fletch,” Gahan says. “That would be impossible. There was only one Fletch, that’s for sure.” So Gahan and Gore are working with multi-instrumentalist Peter Gordeno and drummer Christian Eigner, who have been touring members of Depeche Mode since the late Nineties, on how to pull it off live and incorporate the new music. (The group’s longtime collaborator, filmmaker and photographer Anton Corbijn, is already working with the band on the look of the tour.)

In an unusual move for Depeche Mode, the group will start its Memento Mori tour in North America instead of Europe. “I can’t remember the last time we started in America, if we ever have,” Gore says. “I’m sure we did at some point, but it just seemed like something different to do.” (The European leg will begin May 16.  (The European leg will begin May 16. Some of the venues the group next year will play include Madison Square Garden, Twickenham Stadium and the Stade de France.)

Until then, they will press forward while continuing to grieve their friend and bandmate’s death. “It was very odd coming to Berlin and coming into a hotel where we have been with Andy many times, and just seeing the bar where we’d often seen sitting,” Gore says. “That was a bit of a reality check. Everything that we’re doing from this point forward is different, so we just have to put our heads down and do the best we can.”