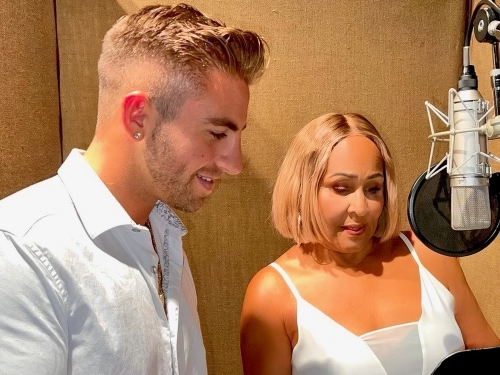 Darlene Love was scrolling through Facebook earlier this year when she came across an interview with 23-year-old Fifties pop throwback singer Chris Ruggiero citing her as one of his favorite vocalists. “Very few people his age talk about our music,” says Love, 81. “I found it just mind-blowing.”

The Facebook discovery ultimately led to them recording “Grown-Up Christmas List” together for Ruggiero’s new holiday LP Christmas With Chris Ruggiero. It’s the first time that Love has recorded a Christmas tune (discounting the 2005 SNL classic “Christmastime for the Jews”) since she teamed up with Luther Vandross in 1995 for “I Listen to the Bells.” Check out a premiere of the song right here.

Ruggiero’s interest in Darlene Love goes back to childhood Christmases where his family would play her 1963 masterpiece “Christmas (Baby Please Come Home)” and other holiday tunes from her catalog. “When it was Christmas time, Darlene’s voice filled our car, our home and basically everywhere we went,” he says. “And I’ve always loved her voice, and studied it.”

When he got a little bit older, Ruggiero began performing songs from the Fifties and Sixties at concerts around the country. He’s appeared on PBS, and shared the stage with Bobby Rydell, the Duprees, the Drifters, and other artists old enough to be his grandparents. “This is my passion,” he says. “And these songs are timeless.”

Once he connected with Love on Facebook, they met for lunch at The Palm in midtown New York, a favorite of Love’s going back to her years on Broadway in shows like Hairspray and Grease. When Love heard he was working on a Christmas album and struggling to figure out how best to record “Grown-Up Christmas List,” she offered to help out. “I almost fell over,” he says. “I had never thought that I would be singing a duet with one of my favorite singers of all time.”

When Love first walked into the studio, she felt an intense sense of deja vu. It turns out it was the same studio she recorded “All Alone on Christmas” with Steve Van Zandt and the E Street Band for the soundtrack to Home Alone 2: Lost in New York City. It’s probably her most well-known holiday song after “Christmas (Baby Please Come Home).” Both songs are pivotal part of her Christmas show, which hits theaters all across North America every November and December.

That’s why she was initially so rankled earlier this year when she saw that Mariah Carey was attempting to trademark the title “Queen of Christmas.” “What does that mean, that I can’t use that title?” she asked on Facebook. “David Letterman officially declared me the Queen of Christmas 29 years ago, a year before she released ‘All I Want for Christmas Is You,’ and at 81 years of age I’m NOT changing anything. I’ve been in the business for 52 years, have earned it, and can still hit those notes! If Mariah has a problem, call David or my lawyer!!”

When the subject comes up today, she’s much more magnanimous about the situation. “I’ve never even thought about being the Queen of Christmas,” she says. “I wasn’t angry or mad [when she attempted to trademark it]. I just think everyone needs to be a part of Christmas. And what does it even mean? She had one Christmas song. She’s never done a Christmas tour. I’ve been doing this for years. But if she wants to be the queen, go ahead. I’ve got the king. His name is Jesus.”

Around the time of the “Queen of Christmas” flare-up, Mel Gibson began telling the press that he plans to direct a fifth Lethal Weapon movie next year, and that Danny Glover would be returning as well. Love played Trish Murtaugh, the wife of Glover’s character Roger Murtaugh, in all four of the previous movies. Does that mean that she’ll be returning as well? “I’ve talked to them already,” she says. “They told me that the [Murtaugh] family passed away. They said my granddaughter was going to be in it, but the rest of us will not. They’ll probably talk about us, but we won’t be in it.”

Where Love is going, however, is a month-long Christmas music tour that kicks off November 26 at the Mayo Performing Arts Center in Morristown, New Jersey. Ruggiero will be busy with his own holiday tour, but he has December 17 off and plans on joining her at the Tarrytown Music Hall in Tarrytown, New York so they can sing “Grown-Up Christmas List” live together for the first time. And if Love gets her way, they’ll have many more chances in the future.

“As long as it’s not work for me, I’ll be out there doing it,” she says. “I might stop doing the tours at some point and just do one or two shows here and there, but I don’t think I will ever use that word ‘retire.’”