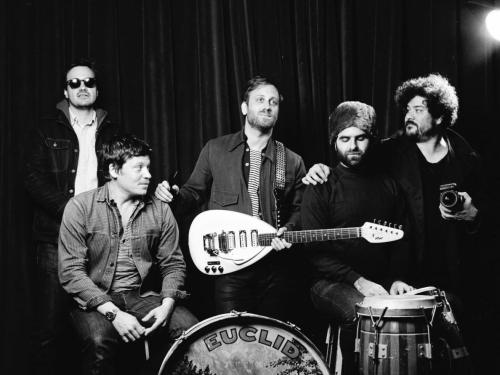 The Black Keys’ Dan Auerbach has reactivated his side project the Arcs for Electrophonic Chronic, the band’s first album since their 2015 debut Yours, Dreamily.

The LP features the Arcs’ original lineup of Dan Auerbach, Leon Michels, Nick Movshon, Homer Steinweiss, and the late Richard Swift, with the album paying tribute to the beloved singer-songwriter-producer-collaborator who died in 2018.

“This new record is all about honoring Swift,” Auerbach said in a statement. “It’s a way for us to say goodbye to him, by revisiting him playing and laughing, singing. It was heavy at times, but I think it was really helpful to do it.”

Ahead of Electrophonic Chronic’s Jan. 27 release on Auerbach’s Easy Eye Sound label, the band have shared the animated video for their return single “Keep On’ Dreamin’”:

The Arcs’ Michels, who co-produced the album with Auerbach, said in a statement, “There are probably between 80 and 100 tracks that we laid down because we just constantly recorded after we put out Yours, Dreamily. It was so much fun to be in the studio once again, so we were just making music all the time. I think there was always a plan to make a follow-up record.”

Auerbach added of the Sixties-inspired outfit, “Whether it was New York City or Nashville or L.A. or Swift’s hometown of Cottage Grove, Oregon, wherever we were, we would always get in the studio together. Always. It was our favorite thing to do. It’s rare that you meet a group of people that you click with like that, who you instantly bond with. We were just having fun, making sounds, making music. It was an amazing time for me.”

It’s been a busy year for Auerbach as the rocker also released Dropout Boogie with the Black Keys back in May.