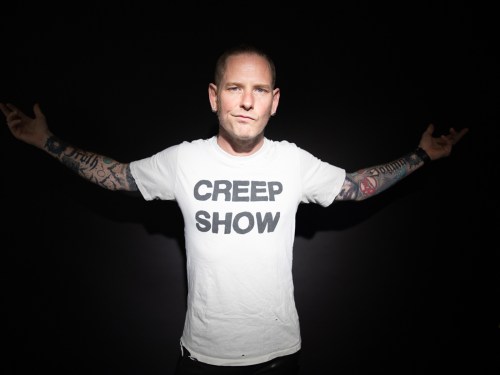 When Corey Taylor was five years old, Buck Rogers changed his life. If the Slipknot frontman hadn’t seen the 1979 film,Buck Rogers in the 25th Century, he never would have seen the trailer for John Carpenter’s genre-defining slasher flick, Halloween.

Taylor, now 48, still has total recall of the moment he first saw masked killer Michael Myers: “I can’t tell you one thing about the Buck Rogers movie, but I can remember everything about that trailer,” he says over Zoom, looking relaxed in a surprisingly brightly lit kitchen. “I can remember where my mom and I were sitting in the theater. I can remember what it smelled like. The preview was so fucking cool. It obviously explains the appeal of Slipknot for me.”

The trailer sparked Taylor’s lifelong obsession with horror movies. As he got older, he started buying every issue of Fangoria, Starlog, and the last few issues of the original run of Famous Monsters of Filmland, the pioneering fanzine that helped build the iconography of Frankenstein, actor Vincent Price, and homespun ghoulies like Vampirella. He eventually lost his magazine collection as his family moved around the country, but his love of horror zines endured.

Now Taylor doesn’t worry about missing issues. Earlier this year, he bought the rights to the Famous Monsters brand and will be relaunching the magazine, as well as using the name for making toys, producing films, and hosting festivals. Taylor announced his acquisition on Friday at Burbank, California’s Son of Monsterpalooza convention.

“Our job is to build a foundation to bring Famous Monsters into the modern age, while also honoring the legacy that came before,” he tells Rolling Stone. “It’s the whole reason that we were fans to begin with.” In addition to Famous Monsters, Taylor and his business partner, Eben McGarr (owner of Mad Monsters magazine and convention), also bought the rights to Captain Company (the Famous Monsters “store” that sold rubber masks and sea monkeys before becoming a real retail enterprise), and the life story of Famous Monsters founding editor Forrest Ackerman.

Taylor’s foremost goal with relaunching Famous Monsters is to reconnect the brand, which inspired everyone from Stephen King to punk band the Misfits, with horror fans. He doesn’t see Fangoria or any of the other fests that have emerged in the decades since Famous Monsters launched in 1958 as competition; he sees it as its own thing that can fit into the current horror ecosystem. “It was the first real place where we, as horror nerds, could feel safe and feel connected feel like we weren’t alone,” he says. “The internet has made it easy for us to connect, so I want to kind of make this another viable place for them to come.”

Step one for Taylor is digitizing every issue of Famous Monsters and making them available to read for free. After seeing DVDs containing PDFs of all the issues on Amazon, he figured the least he could do is save collectors some money. The title’s first issue, which came out in February 1958 and featured a blonde making eyes at Frankenstein’s creature, is the first installment available in the “Ack-Hives” (a play on Forrest Ackerman’s name).

Next, he wants to reestablish a Famous Monsters convention, where he hopes to pay tribute to Ackerman and founding publisher Jim Warren and celebrate the title’s history. “We do that by celebrating them at the conventions with special Famous Monsters setups, almost like a moving museum of sorts, trying to recreate the ‘Ackermansion’ in a weird way,” Taylor says. Finally, he plans to relaunch the magazine as an annual or biannual publication, using editorial concepts from past issues in new ways.

Where the original Famous Monsters venerated horror’s first golden age — Universal monsters like Dracula and the Creature From the Black Lagoon, as well as Lon Chaney’s legacy — Taylor hopes to use the magazine to trace horror’s evolution. “As a fan who has loved all of it, there’s no one corner of the genre that I subscribe to,” he says. “I can watch Karloff as the Mummy, or I can fucking root for Brendan Fraser in the remake that now seems like a classic in retrospect. There are things to celebrate, going all the way back and going all the way forward. We’ll be looking at the monsters that I grew up with, which is Jason, Michael Myers, Freddy, although as the modern-day versions of these Universal Monsters and portraying them and having people play with how they look or how they pertain to the past, as well.”

Taylor is also excited to make up monsters of his own. Citing Ackerman and Warren’s characters like Vampirella and Eerie, he’d like to create his own and turn them into toys, which the Captain Company would sell. He also plans to use the Famous Monsters brand as his studio for filmmaking. “I’ve been writing my own scripts now for the last five, six years. And I’m trying to get some of my stuff into production right now,” he says. “There’s a handful that are very, very close. So anything that I put out is instantly going to get the Famous Monsters logo on it, just to build that brand recognition.” He pauses a second. “I fucking hate that term ‘brand,’ but that’s what it is.”

His idea for a convention would be something that roams around from city to city and year to year “almost like the Super Bowl or WrestleMania.” He also hopes to launch a Famous Monsters cruise that blends music and horror. “I would perform,” he says. “I would get some of my friends who lean into that side of it. And really put something cool together.”

Now Taylor just needs to channel his determination into making Famous Monsters all he believes it can be. “I’m terrified,” he says, “but I’m also fucking excited because you anything worth doing is worth going to the limit for it.”