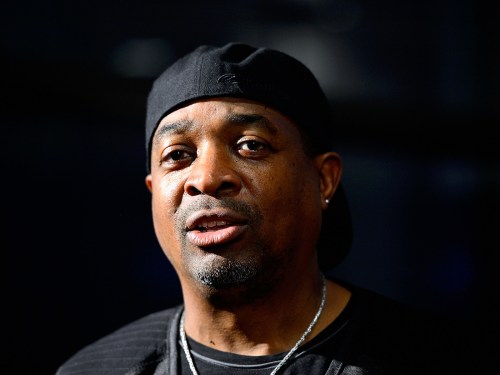 Chuck D has spent the last four decades shining a light on American injustice with Public Enemy. Now he is expanding his platform.

A new triptych he illustrated for the cover of the first issue of comic book Rogue State depicts gun-toting MAGA supporters, pregnant women suffering after the Supreme Court overturned Roe vs. Wade, and gun-toting fundamentalists executing homeless people while getting marketed to. The bottom of each panel contains a theme: “dirty water,” “food shortage,” and “homelessness.” The centerpiece of the marker-and-watercolor panels will come out on Nov. 9. The other two parts will be available as variants; if you have all three, you can link them together.

“I don’t really think of anything I approach as being difficult,” he tells Rolling Stone, “although I thought Roe vs. Wade being overturned was crazy so that definitely weighed on me.”

Rogue State, a new book by writer and publisher Matteo Pizzolo for his Black Mask imprint with Bad Religion’s Brett Gurewitz, presents an alternate reality in which an authoritarian regime has taken hold of the United States after a contested election and the Supreme Court OK’d militias based on the wording of the Second Amendment. A group of free thinkers in San Francisco’s Mission District decide to fight back against the rogue state. 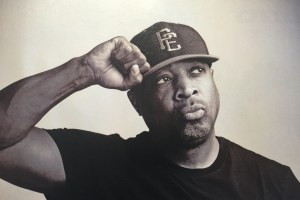 When Pizzolo reached out to collaborate, the story spoke to Chuck. “I thought the concept that there are good people out there but are surrounded by adversaries, even though they might look normal, was radical,” Chuck D says. “Plus, it had a throwback to the last century kind of vibe mixed in.”

“I really believe that not only can we address things like a Supremacist Court through comics, but I believe we actually have a responsibility to use this platform for radical art because there are so few platforms left to tell stories like this, so it’s a waste to use this space to just tell the same old genre stories you can tell anywhere else,” Pizzolo tells Rolling Stone. “Comics has a legacy of really daring, personal, radical stories that wouldn’t exist without the autonomous zone that comics can be, and I think it’s crucial for creators to seize the opportunity to create comics that really shake things up.”

Pizzolo, who remembers recommending Public Enemy’s It Takes a Nation of Millions to Hold Us Back to customers at the New York City record store where he worked, reached out to Chuck after seeing the artwork the rapper has been producing in recent years. Last year, the artist worked with comics imprint Z2 on Chuck D Presents Apocalypse 91: Revolution Never Sleeps, a book that took cues from the album that’s home to protest songs “Shut ‘Em Down” and “By the Time I Get to Arizona.” Chuck also has an art book, Livin’ Loud, due out next month.

For Chuck, doing more with visual art is just another way of reaching people. “Everybody’s a ‘screenager’ now and the masses tend to listen with their eyes,” he says. “Their gadgets are their gods.”

“When I started seeing his visual art pieces channel that rage and power through a new lens it really shook me,” Pizzolo says of why he wanted to work with the artist. “It’s Chuck D’s perspective, raw and unfiltered. We all know his work as part of a larger collaboration through the music, but his visual art is 100 percent Chuck. It’s singular.”

In the issue, Chuck’s art will also be featured on a wall in Rogue State’s imaginary Mission District. When asked what he thinks of having his protest art serve as a mural, for once, he’s at a loss for words. “My art isn’t always revolutionary nor is it evolutionary,” Chuck says. “It just is what it is and sometimes I don’t have any words for it.”