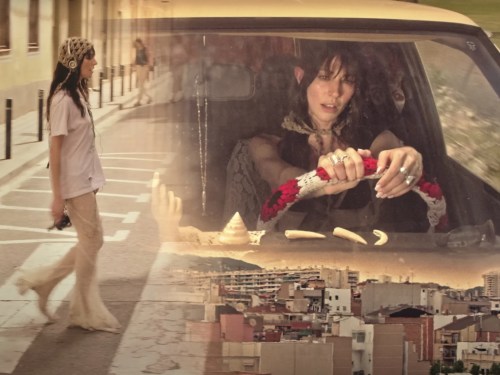 Following the critical success of “Billions,” Caroline Polachek is back with the official release of her new track, “Sunset.” Paired with a video peppered with scenes of a rocky beach town in Barcelona, the Sega Bodega-produced song weaves Polachek’s signature otherworldly vocals with Balearic beats, hand claps, and nimble guitar strings.

The song is a quick burn and tells the story of bold, fearless love. Co-directed by Matt Copson and Polachek, the collage-style video follows the singer as she drives through town, plays with kittens in the streets, and sketches from a sun-soaked rooftop. There’s even an ode to her past work, with close-ups of Polachek spliced with signage that plays with her “Bunny Is a Rider” song name: it reads “Bunny Is a Driver.” Another reads: “How does it feel being so RICH?” (a statement she made accompanying the initial release of “Billions”).

The singer recently released “Non Voglio Mai Vedere Il Sole Tramontare,” a collaboration with 12 Ensemble Orchestra, composer Oliver Leith, and Danny L Harle. Over the summer, Polachek performed at Lollapalooza and teamed up with Flume for “Sirens” earlier in the year. She released her most recent album, which was also her solo debut, Pang, in 2019.