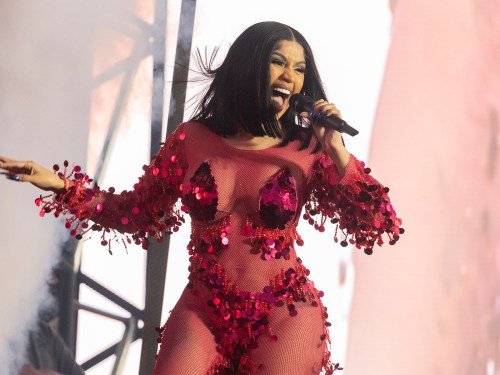 Six years after Cardi B dropped her first mixtape with an attention-grabbing cover image, the Grammy-winning rapper appeared in a California courtroom Tuesday to battle a $5 million lawsuit claiming the project’s “raunchy” artwork “ruined” the private life of a married California dad.

The world-famous rapper sat quietly at her defense table in federal court in Santa Ana as an image of the cover art for Gangsta Bitch Music Vol. 1 flashed on large screen for jurors. The image featured Cardi in the back of a limousine, staring into the camera, taking a swig from a Corona, and holding the back of man’s head in her hand as he appeared to perform oral sex on her.

A Black male model willingly posed for the original photograph, but a digital artist eventually replaced the model’s own cartoon-style back tattoo with a portion of an elaborate tiger and serpent tattoo he found on the Internet, lawyers on both sides told the jury of four women and four men.

The superimposed tattoo artwork turned out to be part of a complex “back piece” that plaintiff and body art aficionado Kevin Michael Brophy Jr. considers a core piece of his identity, at least according to his testimony delivered Tuesday.

“It felt like my Michelangelo was stolen off the wall and just literally ripped off and robbed and just put wherever these people wanted to put it,” Brophy, a marketing manager with the surf and skate apparel brand RVCA, testified.

“It looks like I’m giving oral sex to somebody that’s not my wife, somebody that’s not my partner, and an image that I never signed off on, ever,” he said, calling the publication of the mixtape cover and the fact that a cease-and-desist letter sent in 2017 received no response a “complete slap in the face” causing him “hurt and shame.”

“Being a father of two and a devoted husband and a man of faith as well, this goes against everything that I stand for, and I would never ever sign off on something like this,” Brophy testified, calling the artwork “completely raunchy (and) disgusting.”

Cardi, born Belcalis Almánzar, is due to take the witness stand later in the expected four-day civil trial.

In her court filings leading up to the trial, she claimed the artist who photoshopped a portion of Brophy’s tattoo onto the cover did so without her knowledge. She also said the man with his head between her legs clearly isn’t Brophy because he has a full head of dark hair and lacks Brophy’s distinctive “Born to Lose” neck tattoo.

“That’s a Black man with hair, and this is a white man with a shaven head,” Cardi’s lawyer Peter J. Anderson said in his opening statement Tuesday, comparing the male model to Brophy.

Anderson told jurors Brophy and his wife “have been unable to identify anyone” beyond the tattoo artist who reached out to say they recognized him in the 2016 cover art before he filed his lawsuit in October 2017. The artist, meanwhile, owns the actual copyright to the tattoo artwork and has never pursued a claim of his own related to the cover, Anderson said.

“They have not identified any person, any member of the public, any friend who said that,” Anderson told the jury, claiming it was only after the lawsuit went public that Brophy started receiving texts and jokes in “poor taste.”

“That’s a self-inflicted wound. He caused that by identifying himself when no one else had identified him as being the person in the image,” Anderson said. He further claimed the tattoo imagery photoshopped onto the mixtape cover was altered and manipulated to such a degree that it now constitutes a “newly created piece of art” protected by the First Amendment.

A. Barry Cappello, Brophy’s lawyer, presented a different theory of the case in his dueling opening statement. “Ladies and gentlemen, the lawsuit is simple. This wasn’t hers to take,” Cappello said. “This was his likeness. It’s the personal property, it’s the personal identity of a private citizen, not another celebrity. This is a private person. Unless you ask for it or you pay for it, you can’t take it under the laws of the land… You can’t take somebody else’s image and do something offensive with it, hold it in a false light.”

He said when Cardi and her team “blew off” Brophy’s cease-and-desist letter sent in 2017, “they decided they would ruin a private family’s life for five years.”

Brophy is due back on the witness stand Wednesday. U.S. District Judge Cormac J. Carney told jurors he expected testimony to last four days and that they would begin their deliberations Friday.

Cardi, 40, is expected to take the witness stand as early as Wednesday. She previously testified during her defamation trial against vlogger Latasha Kebe in federal court in Georgia that ended with a $4 million victory for the “WAP” rapper.

Last month, she took a deal and pleaded guilty to two misdemeanor charges linked to a bottle-tossing brawl inside a New York strip club four years ago.

“Part of growing up and maturing is being accountable for your actions. As a mother, it’s a practice that I am trying to instill in my children, but the example starts with me,” Cardi said in a statement sent to Rolling Stone after accepting the plea deal.