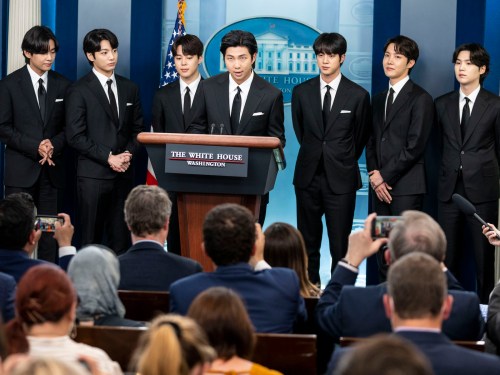 After months of exploring options for possible exemption, BTS’ label has confirmed that all seven members of the K-Pop group plan to fulfill their mandatory military duties in South Korea. Jin will be the first to enlist following the release of his forthcoming solo material at the end of the month.

According to a statement from Big Hit Entertainment, the six remaining members will follow based on their individual schedules, thus extending the band’s previously announced hiatus to 2025.

“Since the creation of BTS over ten years ago, the band has risen to international success, broken records, and catapulted K-Pop into the global stratosphere,” Big Hit shared. “BIGHIT MUSIC has focused to the milestone moment when it would be possible to respect the needs of the country and for these healthy young men to serve with their countrymen, and that’s now.”

In South Korea, it is standard for men to begin a 21-month term by their 28th birthday. Those in BTS who have already passed the age threshold have been accommodated with more time while options floated around for them to complete their service in a different capacity. Earlier this year, Busan mayor Park Heong-joon considered alternative duties that would remove the prospect entirely, including fulfilling public duties as PR ambassadors in the lead-up to Busan’s bid to host the 2030 World Expo.

“With the release of their first anthology album earlier this year, it opened the path to allow the members to take some time to explore individual projects,” Big Hit shared. “As part of the HYBE family, we support and encourage our artists and are beyond proud that they will each now have time to explore their unique interests and do their duty by being of service to the country they call home.”

This past weekend, BTS performed a free concert titled “BTS ‘Yet to Come’ in Busan in support of Busan’s bid. The show drew over 49 million people on Saturday, including 50,000 in-person attendees. Their enlistment decision had not yet been announced, but according to CNN, RM told the audience: “If the seven BTS members feel the same way and if you guys have faith in us, we will overcome whatever happens to us in the future, and we will perform with you guys and make music. Please have faith in us.”

In its statement, Big Hit added: “After the phenomenal concert to support Busan’s bid for the World Expo 2030, and as each individual embarks on solo endeavors, it’s the perfect time and the members of BTS are honored to serve.”

When Rolling Stone spoke with BTS last year, their plans regarding enlistment were still uncertain — but they didn’t seem worried. “I’m sure it will work out so that we can continue to see ARMY,” V said at the time. “About military service or what will happen, we haven’t discussed it in the specifics amongst ourselves, but I’m sure it’ll work out eventually.”

Jin, who would have been first to begin his service regardless based on his age, explained: “I think the country sort of told me, ‘You’re doing this well, and we will give you a little bit more time,’” Jin told Rolling Stone last year. Military service, he added, is “an important duty for our country. So I feel that I will try to work as hard as I can and do the most I can until I am called.”