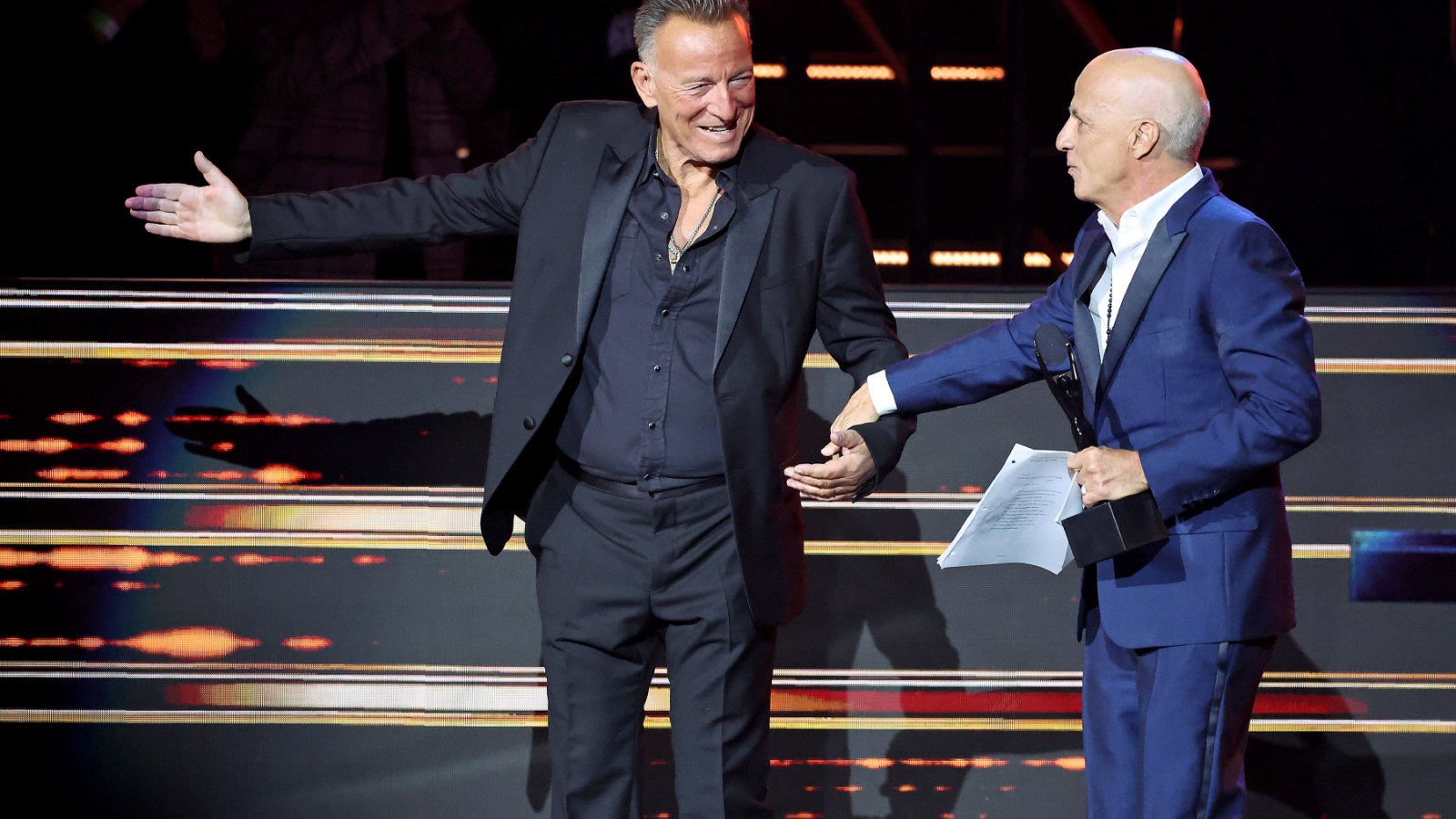 Jimmy Iovine has had one of the most illustrious careers in music. Over the course of his five-decade career, from engineer to producer to executive and entrepreneur, Iovine has been at the crossroads of some of music’s biggest moments. On Saturday, Bruce Springsteen recalled a particularly meaningful one during his glowing speech, inducting his “little brother” Iovine into the Rock & Roll Hall of Fame and presenting him with the Ahmet Ertegun Award.

It was 1978. “No one knew what the words Mercedes Benz meant to me,” Springsteen said. “But Jimmy knew.” It took getting Springsteen in his orange Mercedes and taking him on a drive to Coney Island, to convince him to give the unfinished composition “Because The Night” to a punk band called the Patti Smith Group.

“With Jimmy’s guidance, Patti turns ‘Because The Night’ into a huge Top Five hit record,” Springsteen said as the audience cheered. “Something that I could never have done, because I didn’t have the guts to turn it into a love song … Jimmy knows great songs and he knows who can sing them. He has one of the greatest guts for talent is one of the greatest sponges for learning I’ve ever met.”

Springsteen, who met Iovine as the “skinny Italian kid” changing the tape on the recording machine, spoke about watching his career unfold in spectacular ways as he trusted his artists, honored his relationships, and never “took off his fan shoes.”

Jimmy Iovine has graduated from being the skinny Italian kid who changes the tape and hits the start and stop buttons on the recording machine to the skinny Italian kid at the console engineer on Born To Run and Darkness on the Edge of Town. I walk in the studio and Jon just says to me, ‘he told me he could do it.’ I asked him ‘what’s this kid doing at our mixing boards?’ But somehow, he did it, and on an engineer’s salary, he had parked outside the Record Plant, an orange Mercedes. Now, this was a moment when no one knew what the words Mercedes Benz meant to me. Jimmy knew. What else does Jimmy know? That afternoon, gets me in that honorable Mercedes Benz, and takes me on a little drive to Coney Island. On the way, he casually drops, “What’re going to do with that song, “Because The Night?”

“That’s what I mean. If you’re not gonna finish it…”

[Bruce interjects defensively] “Yeah I am!”

“What are you gonna do with it?” [Iovine says.] “I want to get Patti Smith to sing it.”

Of course, with Jimmy’s guidance, Patti turns “Because The Night” into a huge Top Five hit record. Something that I could never have done because I didn’t have the guts to turn it into a love song as Jimmy [did.]

Jimmy knows great songs and he knows who can sing them. He has one of the greatest guts for talent is one of the greatest sponges for learning I’ve ever met. Jimmy misses nothing. […] Trust your artists. Let them know. Hire the best people. Give them the reins. Don’t be intimidated by talent. Recognizing her talent is your talent. Jimmy is brave and smart. He turned his relationship with the great Dr. Dre into one of the greatest and most valuable partnerships in the music business. He trusted Dre’s vision and he recognized the power of hip-hop and its ability to conquer the culture.

Now, of course as an entrepreneur, he tells me he told Dre, ‘We shouldn’t make sneakers, we should make speakers!” So they did. They made millions of them. Jimmy has the intelligence, the art, the soul, and the trust to understand his artists, to put them first, and to put the business of music in its proper perspective. It isn’t rocket science, except for the fact that pretty much no one else was doing it the way he did.

He is an incredibly well-rounded, visionary executive. Jimmy never took off his fan shoes. You need to keep them on. I still get messages from him with Born To Run blasting in the background. Jimmy recognized that the chemistry in Jon and I’s relationship is the secret formula — not just for rock and roll magic but for rock and roll. What does Jimmy know? Jimmy knew everything important. So, Jim, all I can say is [unintelligible]. Congratulations, little brother. Welcome to the Hall of Fame.