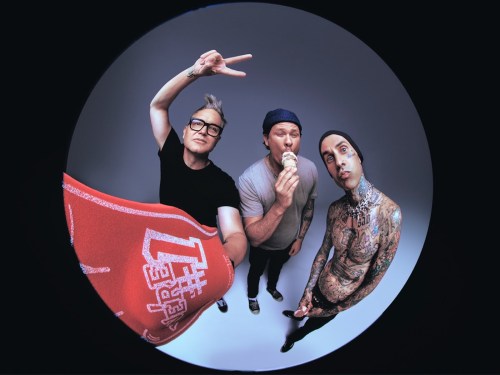 Mark Hoppus lied. Back in August, after Tom DeLonge shared a photograph of his former Blink-182 bandmates, tagging both Hoppus and Travis Barker, the bassist and singer took to social media to insist that the band wasn’t reuniting, much to the dismay of their fans. But the band announced today that not only is Blink-182 back with a massive world tour, but DeLonge will also return to the lineup for the first time in nearly a decade. And to top it off, they are releasing a new single, “Edging,” out Friday.

The band made the announcement in true Blink-182 fashion — with a raunchy, suggestive social media post that could give someone a very wrong impression if it were to be played too loud in public. “We’re coming. Tour’s coming. Album’s coming. Tom’s coming,” they wrote alongside a minute-long announcement visual.

The accompanying reunion tour marks their most ambitious trek to date. Between March 2023 and February 2024, Blink-182 will make stops in North America, Europe, Australia, and New Zealand, in addition to visiting Latin America for the first time in their decades-long career.

The tour begins March 11 in Latin America with support from Wallows and spans through April 2. In May, the North American leg supported by Turnstile will begin in Minnesota. The band will make stops in Chicago, Montreal, Brooklyn, Hershey, San Diego, Austin, Atlanta, and more before wrapping in Nashville on July 16. The Story So Far will accompany Blink-182 on the European leg beginning Sept. 6 and concluding on Oct. 15. In February 2024, the band will head to Australia and New Zealand with Rise Against.

General sale begins Monday, Oct. 17 at 10 a.m. local time via the official Blink-182 website. Blink-182 will also headline Lollapalooza 2023 alongside Billie Eilish and Drake in addition to the 2023 edition of We Were Young Festival alongside Green Day and more.

DeLonge, who co-founded Blink-182 with Hoppus in 1992, departed the group in 2015, saying he wanted to “change the world for my kids and everybody else’s.” Their last album together was 2011’s Neighborhoods. Since then, he has released music and performed as part of Angels and Airwaves. Alkaline Trio’s Matt Skiba replaced DeLonge as lead guitarist shortly after and toured with the band since.

In 2019, DeLonge told Rolling Stone that there is still “a lot of love and respect” between him and former bandmates, adding, “I think there will be a time, absolutely, that we play together.”

“We all love each other and care about each other,” he said. “We don’t always see eye to eye. I think people see the differences in our art. I love seeing how they’ve evolved and what they’re doing. I think when people look at Angels and Airwaves and what I’m doing, they can tell the differences. And sometimes it’s hard when you’re all trying to paint the same painting. And every once in a while, I like to see what the painting will be if I do it a different way. Off to the side. I think there’s a healthy respect for everyone to be able to paint their own paintings.”