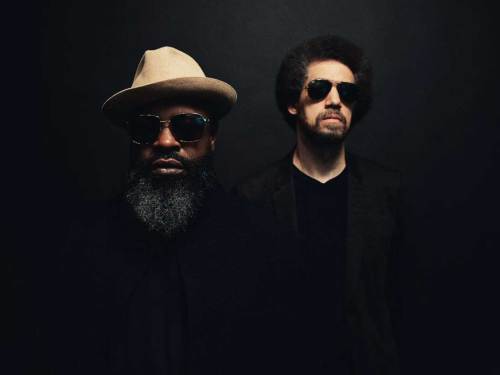 The track appeared on the pair’s collaborative album Cheat Codes

The hip-hop duo Black Thought and Danger Mouse delivered a pensive ode to the late musician MF Doom in the music video for “Belize,” which appeared on their recently released collaborative album Cheat Codes.

Super-producer Brian “Danger Mouse” Burton filmed the video under the direction of UNCANNY, also appearing in front of the camera with The Roots’ Tariq “Black Thought” Trotter for a meditative black and white tribute. The pair ran through the entirety of “Belize” from a vacant warehouse space. The framing holds tight on the latter’s face before his collaborator arrives first as a shadow on the wall, then standing alongside him while MF Doom’s hard-hitting verse brings the song home.

The conversational style of MF Doom’s flow is fitting for the video’s setting, creating a sense of comfort within the desolate space. “The song that is now ‘Belize’ was always unfinished, because I hadn’t been solidly working on anything with [Black Thought],” Danger Mouse told NME earlier this year. “Then as we were working on the album we realized we could finish it and it would fit this album.”

Danger Mouse and MF Doom previously collaborated for their project Dangerdoom and 2005’s The Mouse and the Mask, which marked his last full-length foray into hip-hop until Cheat Codes. Of MF Doom’s posthumous inclusion, he added: “I had to get it right because [I thought], ‘You’re not gonna get too many more of these – if any at all.’ This will probably be the last time I have something with him on it. But I’m happy with how it turned out.”

Rolling Stone highlighted “Belize,” and particularly Black Thought’s clear declaration of “fuck a thick skin, I got me an exoskeleton,” as a standout from Cheat Codes, saying: “The tough-minded self-assessment of that lyric is not surprising, given his decades-long history of being the most underrated MC who is also easily one of the greatest of all time. Fans know Black Thought’s voice over the Roots’ full-band, comparatively organic sounds. Here, his verbal dexterity mixes with actual sample-based hip-hop, a rarity in contemporary, mainstream rap.”