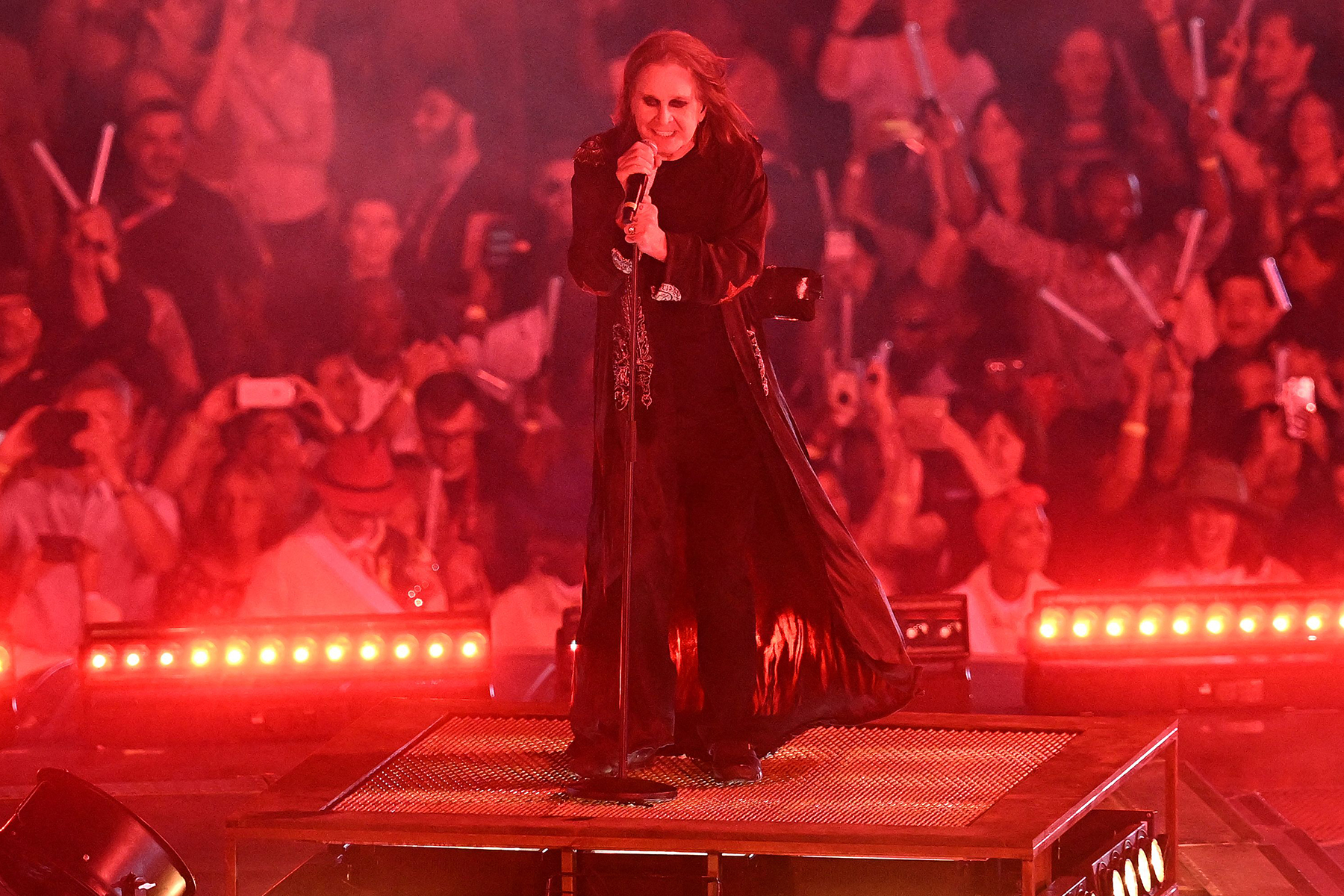 Two of Black Sabbath’s original iron men — Ozzy Osbourne and guitarist Tony Iommi — made a surprise reunion in their hometown of Birmingham, England, on Monday night with a performance at the city’s Commonwealth Games. They performed their classic “Paranoid” alongside two musicians who joined them on their final tour, The End: Adam Wakeman, who played bass and keyboards, and drummer Tommy Clufetos.

After teasing the intro to “Iron Man” with Osbourne bellowing “I am Iron Man” backstage, the group sparked up “Paranoid.” Osbourne rose up from the stage to the deafening cheers of the stadium. His voice sounded strong as he fed off the energy, leading rounds of clapping along as fireworks burst around the venue. Iommi’s riffing and solos sounded crisp and inspired.

Both musicians wore black, as Osbourne’s peacoat fanned out in the breeze. With the fireworks both around the band and onstage, it made for a dramatic moment celebrating their hometown.

Osbourne teased the possibility of a reunion at the Commonwealth Games a few years ago, noting his excitement when ITV asked him if he’d consider playing the opening ceremony for the 2022 Games. “Yes, that would be fantastic,” he said, according to Blabbermouth. “With Black Sabbath or on my own.”

Iommi had opened the Commonwealth Games, which include swimming, a triathlon, boxing, and rugby sevens, among other sports, on July 28, playing a song called “Hear My Voice” with London-born saxophonist and rapper Soweto Kinch. The track featured Iommi’s bluesy guitar solos over New Age strings’ and Kinch’s saxophone lines.

Osbourne’s last time onstage was with Post Malone for a performance of their duet, “Take What You Want” at the 2019 American Music awards. His last full concert was a headlining Ozzfest gig on New Year’s Eve 2018.

The pair formed Black Sabbath with bassist Geezer Butler and drummer Bill Ward in Birmingham in 1968 and released a string of heavy metal-defining albums together until 1979 when the group dismissed Osbourne. They reunited several times over the years and recently concluded a farewell tour, The End, at the city’s Genting Arena on Feb. 4, 2017.

At the time, Osbourne had teased the audience. “Are you having fun?” he said, according to Rolling Stone’s review. “I nearly said, ‘Should we come back and do it again?’ [Pregnant pause] We’re not.” The evening featured a set list that included songs from throughout Osbourne’s first tenure fronting the group, including “Black Sabbath,” “Paranoid,” and “Children of the Grave.”

Months later, Osbourne told Rolling Stone that the gig was “very emotional.” “I couldn’t speak,” he said. “Because I thought if I start talking I’ll end up in fucking tears. That’s hardly the Prince of Darkness, being seen crying.”

After the show, the band recorded extra songs for what was dubbed “The Angelic Sessions,” extra footage for the concert film, The End. After those were finished, they thought they were done. “It was so weird saying goodbye after the sessions,” Iommi said. “Nobody really knew what to say to each other. It was a bit embarrassing really. I think we just sort of said, ‘All right, I’m going.’”

Although Osbourne had called the gig the band’s “final show” onstage that night, Iommi and Butler had left the door open to making another album or playing a one-off gig. Meanwhile, Osbourne launched his own farewell tour in 2018. He had to cut it short, however, after he contracted a staph infection and fell in the middle of the night aggravating an old spinal injury. He has since revealed a diagnosis of Parkinson’s disease but has long said he was planning on returning to the stage.

Osbourne released an album, Ordinary Man, right before the pandemic started in 2020 and has plans to put out a new album, Patient Number Nine, this fall. That album features two songs, “Degradation Rules” and “No Escape From Now,” which feature Iommi’s songwriting and guitar playing.