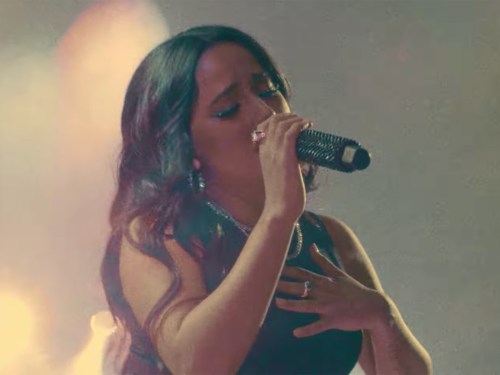 Becky G is reminiscing about a recent trip to Spain. On Friday, the singer released the retro camera-filmed video for her bachata song “Amantes” alongside Dáviles de Novelda. The Zazo Canvas-directed visual captures some of her favorite moments during her recent European adventure.

“Spain has always been a really special country for me,” Becky wrote on Instagram in Spanish. “I filmed this video with images of my family, my team, and my perspective during my time in Spain.”

She adds, “I’m so happy I’ll have these memories forever.”

The video follows Becky and Dáviles as they have fun walking through the city before they are shown performing the track — a trap-infused bachata earworm — onstage. In the clip, she stops by special places across the country, including the Museo Nacional Thyssen-Bornemisza, Casa Alberto, and Corral de la Moreria.

The song showcases Becky’s genre versatility and proves she isn’t afraid to experiment with her sound. Earlier this year, she collaborated with Música Mexicana band Marca MP for “Ya Acabó,” and she spoke to Rolling Stone about “not liking being put in a box” ahead of her excellent LP Esquemas.

“You can hear different sonics in the production, down to the melody, and each song has a space of its own. I wanted to own that as my superpower, versus it being just an artist singing songs just because,” she said about the album. “It was so intentional to step outside the box, especially for my Spanish-speaking fans who might not be used to hearing certain sonics from me.”