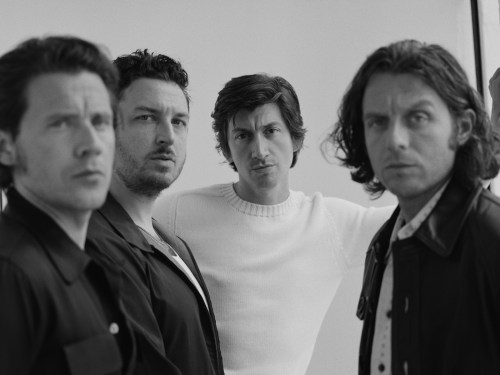 Arctic Monkeys previewed their seventh studio album, The Car, for the first time with a debut live performance of “I Ain’t Quite Where I Think I Am” just before the project was officially announced to the public. With the record set to arrive on Friday, the band has shared the official studio recording of the single alongside a music video fittingly filmed during their headlining set at Brooklyn, New York’s Kings Theatre in September.

Directed by Ben Chappell & Zackery Michael, the video captures frontman Alex Turner enthralling the sold-out (and phone-less) audience in a tale of disillusioned connection. “It’s the intermission/Let’s shake a few hands/Blank expressions invite me to suspect/I ain’t quite where I think I am,” he narrates. “Stackable party guests/To fill the awkward silencеs/The disco strobes in the stumbling blocks/Wait, thеre’s the other island now.”

“I Ain’t Quite Where I Think I Am” follows “There’d Better Be a Mirror Ball” and “Body Paint” in introducing The Car, which marks Arctic Monkey’s first full-length album release since Tranquility Base Hotel & Casino arrived in 2018. Its video also doubles as a sneak preview of their forthcoming North American tour scheduled in August next year.

Speaking with Apple Music’s Zane Lowe, Turner explained: “The idea of the fight and the band trying to get out of the… Because I feel that there was some discussions to that effect – not so much the recording, I suppose, but the period after where we were mixing and putting it all together and discovering the path through it there … one of the ideas with that was just to try – and it seems obvious – but everything has its space and takes its turn.”

He added: “I don’t know, it’s not a battle between the band and this other sound or something. I think it was important for us to try and get somewhere with that, with the dynamics of that whole situation. And I suppose it’s not just between the strings and the band even, but I think … I don’t know, we’re having a bit more fun with those types of ideas.”